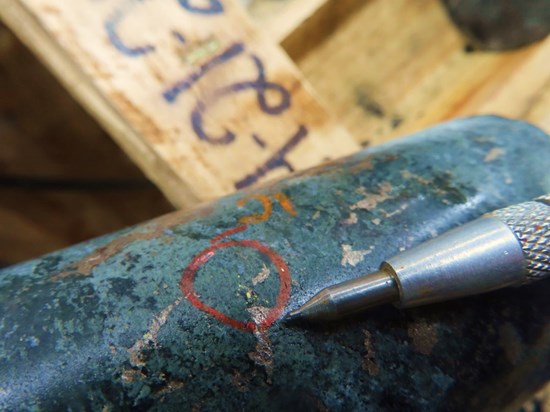 Toronto, Ontario–(Newsfile Corp. – February 16, 2022) – Benz Mining Corp. (TSXV: BZ) (ASX: BNZ) (the Company or Benz) is pleased to announce that drillhole EM21-228, completed earlier on in the drilling season, intercepted the Mine Horizon at D Zone at a depth of 885.0m below surface (vertical depth). The horizon is gold bearing as 21 small (sub-millimetric) specs of visible gold have been identified by the logging geologists at 942.6m depth (core).

“This is an excellent result. Once again, we prove that our targeting method is extremely well suited to the style of mineralisation seen at Eastmain. We are still working through a large gold system with multiple high grade gold occurrences identified over 10km of strike.”

Figure 1: Visible gold grains in EM21-228 ~942.6m deep. This is the deepest intercept of the mineralised Mine Horizon to date. 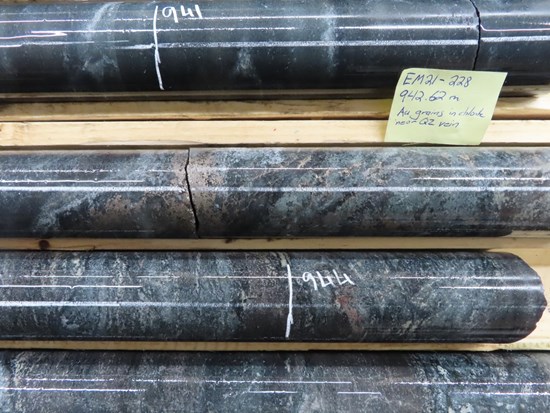 Every conductor we have hit to date has intersected mineralisation making EM a great tool for rapidly assessing where the best parts of the gold system may be. After 18 months of drilling, we still have a multitude of targets to test, highlighting that we may not have drilled the best of them yet.”

Via the use of electromagnetics in late 2020, Benz identified that previous drilling had only intercepted a small part of the system. Large conductive zones outside the previous drilling were identified in 2020 and 2021 with potential to significantly increase the scale of this mineralisation.

The conductors identified in D Zone via FLEM and DHEM underlined a prospective area approximately 500m x 1,100m, which is comparable to the footprint covered by the existing 376,000oz resource at A-B-C Zones. 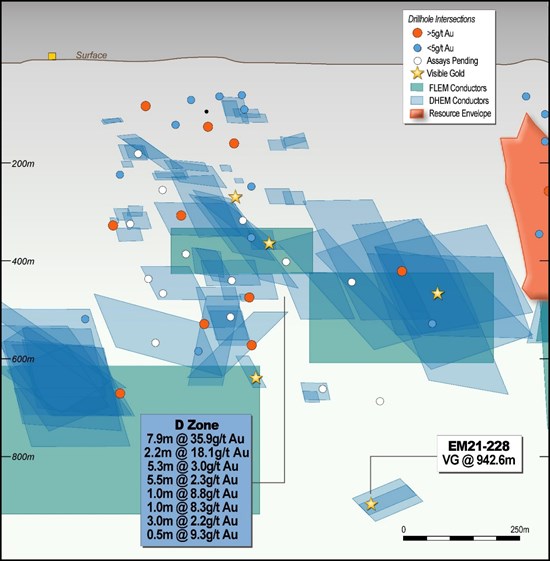 Unlike other companies who commit large amounts of capital to blanket drill on a tight spaced pattern, Benz has chosen a more targeted exploration approach initially testing the scale of the mineralised system before committing to tighter spaced resource definition drilling.

“In the past 18 months, all the drilling completed by the Company has been extensional in nature. Benz is determined not to drill any “verification holes”, “twin holes” or other very closed spaced holes into known mineralisation, sometimes referred to as “director’s specials”. A 1,000m hole was perfectly justified because we knew how successful our direct detection method has been.”

Benz has a lot of information on the style of mineralisation in the Mine Horizon from the very tight spaced (down to 6m x 6m in some places) drilling completed on A, B and C Zones over the past 40 years by its predecessors. Over 100,000m of drilling has historically been completed in an area 400m x 1,100m resulting in an Resource estimate of 376,000oz at 7.9g/t Au with a large component of indicated resource. With the benefit of hindsight, Benz’s management acknowledges that a lot of unnecessary drilling has been conducted on that area with all the associated unnecessary costs.

Benz’s 50,000m of targeted drilling in 2021 has been a lot more successful thus far at growing the mineral system’s footprint and discovering new zones and new mineralisation styles. 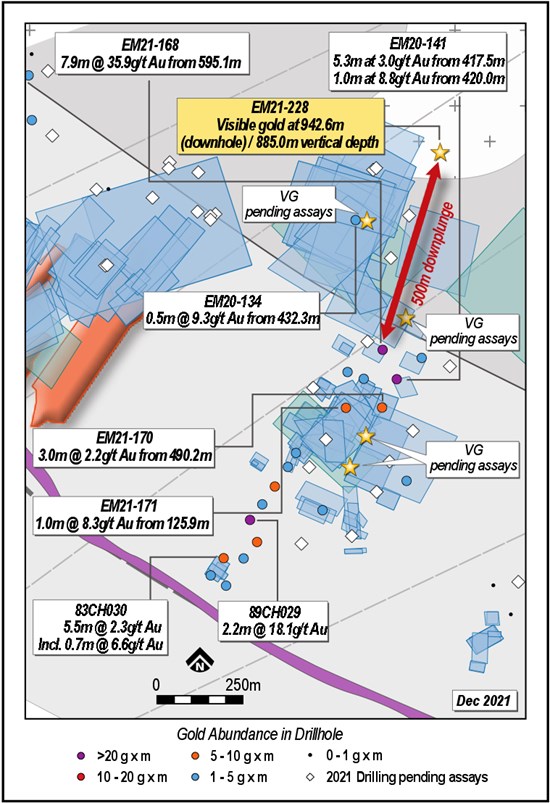 The Mine Horizon is remarkably consistent throughout the property, with richer ore shoots associated with NE oriented structures that also concentrated the sulphides. Benz is simply using electromagnetics to find the sulphides leading the drill rigs to those ore shoots. 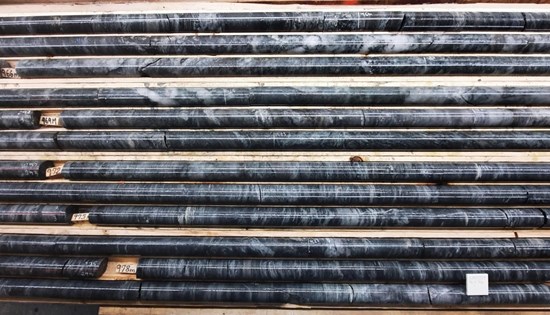 Figure 5: Mineralised Mine Horizon with quartz veining and pyrrhotite EM21-228 ~963.0m to 9975.5m. The ultramafic horizon continues at depth with less sulphides and quartz veins but is still deformed and altered in biotite.

Benz’s strategy for Eastmain was entirely based on the concept of quickly and efficiently grow the existing deposit using electromagnetics. The Company has been consistently delivering that strategy for the past 18 months.

The Eastmain Gold Project, situated on the Upper Eastmain Greenstone Belt in Quebec, Canada, currently hosts a NI 43-101 and JORC (2012) compliant resource of 376,000oz at 7.9gpt gold (Indicated: 236,500oz at 8.2gtp gold, Inferred: 139,300oz at 7.5gtp gold). The existing gold mineralisation is associated with 15-20% semi-massive to massive pyrrhotite, pyrite and chalcopyrite in highly deformed and altered rocks making it amenable to detection using electromagnetic techniques. Multiple gold occurrences have been identified by previous explorers over a 10km long zone along strike from the Eastmain Mine with very limited but highly encouraging testing outside the existing resource area. 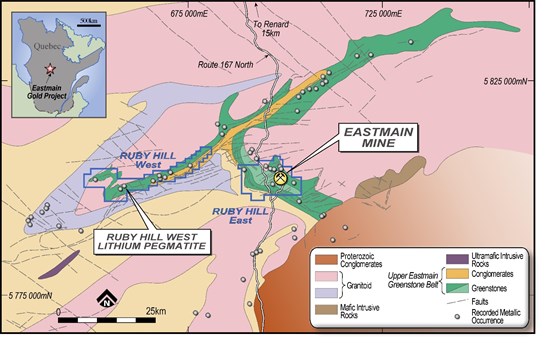 The Eastmain Gold Project is situated within the Upper Eastmain Greenstone Belt in Quebec, Canada and currently hosts a NI 43-101 and JORC (2012) compliant resource of 376,000oz at 7.9g/t gold (Indicated: 236,500oz at 8.2g/t Au – Inferred: 139,300oz at 7.5g/t Au). The existing gold mineralisation is associated with 15-20% semi-massive to massive pyrrhotite, pyrite and chalcopyrite making it amenable to detection by electromagnetics.

Multiple gold occurrences have been identified by previous explorers over a 10km long zone along strike from the Eastmain Mine with very limited but highly encouraging testing outside the existing resource area. Benz has subsequently identified over 180 DHEM conductors over a strike length of 6km which is open in all directions.

In 2021, Benz confirmed the presence of visible spodumene in a pegmatite at the Ruby Hill West project, indicating lithium mineralisation which Benz intends to further explore in 2022.

Competent Person’s Statements: The information in this report that relates to Exploration Results is based on and fairly represents information and supporting information compiled by Mr. Xavier Braud, who is a member of the Australian Institute of Geoscientists (AIG membership ID: 6963). Mr. Braud is a consultant to the Company and has sufficient experience in the style of mineralisation and type of deposits under consideration and qualifies as a Competent Person as defined in the 2012 edition of the “Australasian Code for Reporting of Exploration Results, Mineral Resources and Ore Reserves”. Mr. Braud holds securities in Benz Mining Corp and consents to the inclusion of all technical statements based on his information in the form and context in which they appear.

(Criteria in this section apply to all succeeding sections.)

(Criteria listed in the preceding section also apply to this section.) 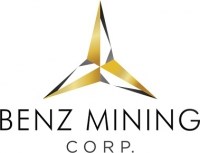 To view the source version of this press release, please visit https://www.newsfilecorp.com/release/113949 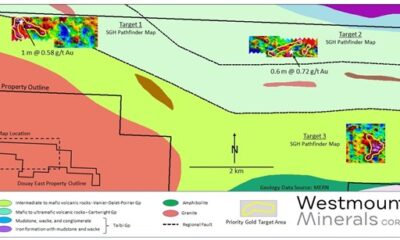