VANCOUVER, British Columbia, Oct. 08, 2021 (GLOBE NEWSWIRE) — Ranchero Gold Corp. (formerly, Melior Resources Inc.) (TSXV: “RNCH”) (the “Company”) is pleased to announce that it has completed its previously announced reverse-takeover transaction (the “Transaction”) with the private entity Ranchero BC Holding Corp. (formerly Ranchero Gold Corp.) (“Ranchero”). In accordance with the terms of the Transaction, the Company has acquired all of the issued and outstanding securities of Ranchero by way of a three-cornered amalgamation in accordance with the terms and conditions of the amalgamation agreement dated February 17, 2021, as amended, between Melior Resources Inc., Ranchero and 1274169 B.C. Ltd. The Transaction constituted a reverse takeover of the Company by Ranchero pursuant to Policy 5.2 of the Corporate Finance Manual of the TSX Venture Exchange (the “TSXV”), as following the closing of the Transaction, the former shareholders of Ranchero own a majority of the outstanding common shares of the Company.

The common shares of the Company are expected to commence trading on the TSXV on or about October 18, 2021 under the new trading symbol “RNCH”. The Transaction remains subject to the final acceptance of the TSXV.

The Company also issued an aggregate of 510,154 common shares of the Company, on a post-Consolidation basis, to LACG Capital Inc. (“LACG”) in consideration for LACG’s assistance in introducing Ranchero to the Company.

In accordance with the policies of the TSXV, the Company obtained the written consent of shareholders of the Company holding greater than 50% of the issued and outstanding common shares of the Company to the Consolidation and the Transaction.

Board of Directors and Management

On behalf of the board of directors of the Company:

This news release contains certain forward-looking statements. Any statements that express or involve discussions with respect to predictions, expectations, beliefs, plans, projections, objectives, assumptions or future events or performance (often, but not always, using words or phrases such as “expects” or “does not expect”, “is expected”, “anticipates” or “does not anticipate” “plans”, “estimates” or “intends” or stating that certain actions, events or results “ may”, “could”, “would”, “might” or “will” be taken, occur or be achieved) are not statements of historical fact and may be “forward-looking statements”. Forward-looking statements contained in this news release include, but are not limited to, the final acceptance of the TSXV to the Transaction. 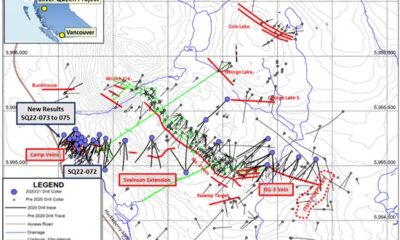