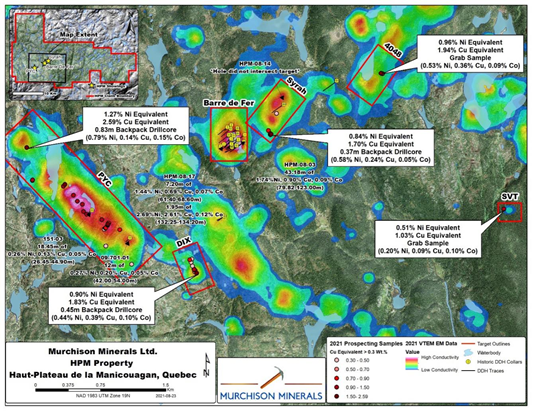 TORONTO, ON / ACCESSWIRE / September 1, 2021 / Murchison Minerals Ltd. (“Murchison” or the “Company”) (TSXV:MUR) is pleased to announce the final assay results from its June prospecting program at the 100%-owned 138 km2 HPM property in Quebec. The assay results confirm the presence of surface nickel-copper-cobalt mineralization at the Syrah and 4048 targets, in addition to PYC and the newly discovered Dix (see August 16, 2021 release) and SVT showings. The results from the prospecting program are considered a major success and indicate a strong likelihood that the HPM property hosts significant nickel-copper-cobalt mineralization outside of the Barre De Fer mineralized body. The prospecting program was only 13 days in length, leaving multiple prospective geophysical anomalies unexplored. Murchison anticipates completing additional prospecting programs combined with a 3,500 m drilling program on the 1.7-km-long PYC mineralized body.

The grab samples from the Syrah target assayed as high as 0.84% Nickel Equivalent or 1.70% Copper Equivalent (0.58% Ni, 0.24% Cu, 0.05% Co) from multiple short backpack drill holes collected at the southern point of a 600-metre-long electromagnetic conductor located using a Beep Mat. The mineralization consists of semi-massive pyrrhotite, like that of Barre de Fer and PYC, with observable chalcopyrite and inferred pentlandite that has been observed at Barre de Fer. The field crews only worked at Syrah for two days and were hindered by thick snow. The company plans to complete additional prospecting in the future to more fully define the surface mineralization. The Syrah target was discovered in 2008 with grab samples that assayed as high as 0.49% Ni, 0.40% Cu and 0.05% Co. Only one hole was drilled in 2008 at Syrah; based on recent geophysical interpretation, the 2008 hole missed the anomaly as it was drilled parallel to the geophysical target. Recent geophysical modelling by Condor Consulting Inc. indicates that both Syrah and Dix have a similar response to the nearby Barre de Fer mineralized body, which assayed as high as 1.74% Ni, 0.90% Cu and 904 ppm Co, over 43.15 metres from hole HPM-08-03. The Syrah target is located only 350 metres away from the Bar de Fer mineralized body and may represent satellite mineralization.

Grab samples collected during the June 2021 prospecting at the 4048 target assayed as high as 0.96% Nickel Equivalent or 1.94% Copper Equivalent (0.53% Ni, 0.36% Cu, 0.09% Co). The samples were collected from several large sulphide-rich angular boulders halfway up a large cliff, as well as a backpack drill hole into the cliff. The source of the mineralization appears to have originated from the side of the cliff. Historic grab samples from 4048 assayed as high as 0.83% Ni, 0.81% Cu, 0.14% Co. This area has never been drill tested and requires extensive follow up.

Murchison’s CEO and President, Jean-Charles Potvin, commented “The results we are seeing from HPM continue to exceed our expectations. We are very eager to commence drilling on the HPM project as the team strongly feels that we will see exceptional results.”

Murchison’s June prospecting program (see June 29, 2021 release) consisted of two field crews of two people, exploring recently identified VTEM conductor targets by utilizing a Beep Mat to locate near surface conductive material that was then exposed with hand tools and sampled using a backpack drill. Despite the prospecting at Syrah target being limited by abundant, deep snow, the HPM program successfully recovered multiple mineralized samples from the showings mentioned above.

*Nickel and Copper Equivalent (NiEq, CuEq) values are based on the following metal prices from Aug 9th, 2021: $8.60/lb Ni, $4.24/lb Cu, and $23.76/lb Co. BP Core is an abbreviation for drill core collected using a backpack drill and is to be treated as grab samples.

Murchison has applied for a permit to drill test the PYC mineralized body at HPM with a 3,550-metre helicopter supported program this October. It is estimated that the drill permit will arrive by mid-September. Murchison is currently in discussion with multiple contractors but has not yet awarded the drill contract for the upcoming program.

A metallurgical sample has been collected from the observed surface mineralization at PYC and was submitted to the Saskatchewan Research Council for mineral identification using QEMSCAN, and for preliminary flotation tests. The results of these preliminary tests are expected soon.

About the HPM Project

The project is within the Haut-Plateau de la Manicouagan area. The claims host prospective gabbroic, ultramafic and anorthositic bodies within the Manicouagan metamorphic complex and are associated with significant nickel-copper-cobalt mineralization identified by a total of 32 diamond drill holes (6,479 m) completed in 2001-2 and 2008-9.

The majority of the past drilling at HPM targeted the Barre de Fer geophysical conductor and confirmed the known nickel-copper-cobalt mineralization approximately 300 metres along strike and to a depth of about 280 metres. The mineralization remains open at depth and partially along strike.

The summer drill program at the Betty Zone was completed this August after drilling 877 metres. The drill core samples from the program have been submitted to the Saskatchewan Research Council Geoanalytical Lab and Murchison anticipates receiving results soon.

The foregoing scientific and technical disclosures on the HPM and Brabant Lake projects have been reviewed by John Shmyr, P.Geo., VP Exploration, a registered member of the Professional Engineers and Geoscientists of Saskatchewan and current holder of a special authorization with the Ordre des Géologues du Québec. Mr. Shmyr is a Qualified Person as defined by National Instrument 43-101.

Murchison is a Canadian‐based exploration company focused on the exploration and development of its HPM nickel‐copper‐cobalt project in Quebec and its 100%-owned Brabant Lake zinc‐copper‐silver project in north‐central Saskatchewan. The Company holds an option to earn a 100%-interest in the Barraute VMS exploration project also located in Quebec, north of Val d’Or. Murchison currently has 108.9 million shares issued and outstanding.

Additional information about Murchison and its exploration projects can be found on the Company’s website at www.murchisonminerals.com. 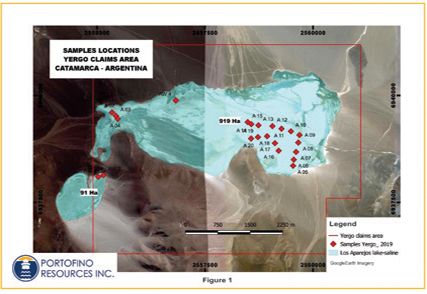 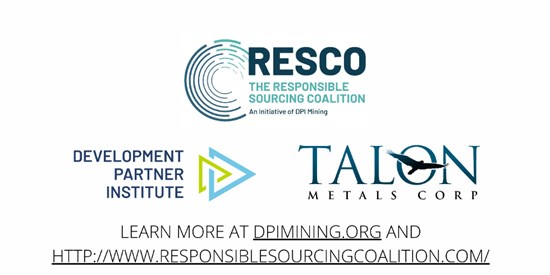 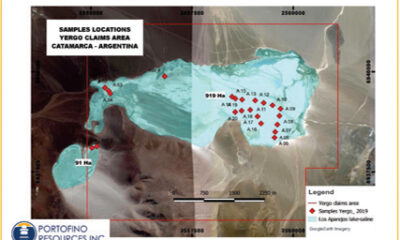 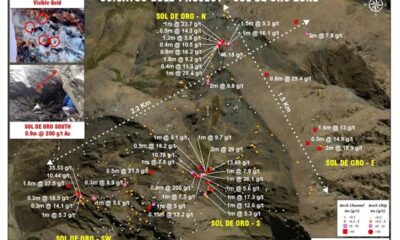