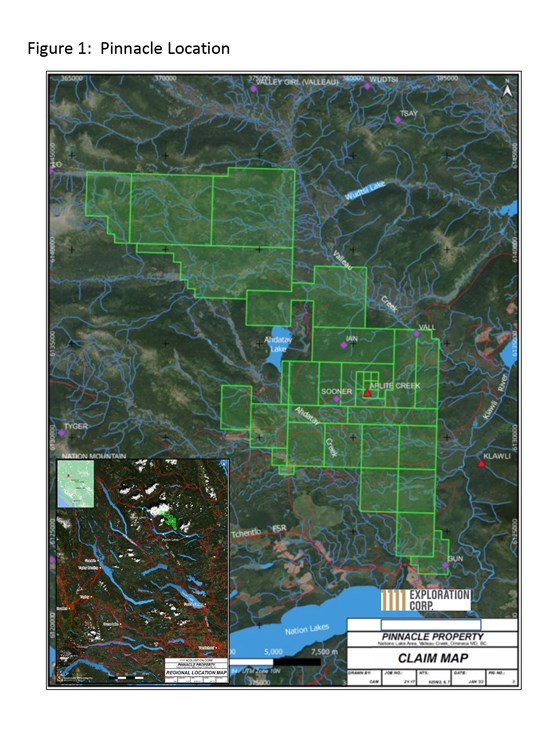 The project is located in north central British Columbia 97 km to the north of the town of Fort St. James and covers 15,487 hectares. (Figure 1). It is located 50 km to the west of Centerra Gold‘s Mt. Milligan Copper-Gold Mine and 20 km to the southeast of NorthWest Copper’s Kwanika Copper-Gold Deposit in a proven copper-gold porphyry district.

Exploration was carried out in August and September of 2021 and was centered on and around the Aplite Creek Prospect. It consisted of 173 soil samples of standard “B” horizon material analysed by conventional digestion and analytical techniques and 85 samples picked up by mobile metal ion sampling (MMI). The MMI samples were collected at the standard sampling sites. A drone UAV magnetic survey covering an area of 4 km by 6 km was also completed. In addition, historical core from 2015 and 2017 that had not been completely sampled was analysed for trace element values to aid geochemical vectoring.

Conventional soils were collected over 4 lines covering the Aplite Creek mineral occurrence in an area of wide spaced historical soil sampling. Results were highly elevated for copper and gold and consistent with historical compiled data. Gold values returned a high value of 1,460 ppb (24% of samples >20 ppb) and copper values with a high value of 8010 ppm (26% of samples >100 ppm, 5% >1000 ppm). MMI data from samples collected at identical stations from two of the conventional soil lines returned elevated gold and copper values that closely matched the conventional soils in location. The MMI technique is used to potentially distinguish source areas of elevated geochemistry using weak partial extractions that may emphasise far traveled ions in bedrock versus nearby mechanical transported values in surficial material. The coincidence of anomalies in both techniques suggest they are reflecting a nearby bedrock source.

Results are presented in Figures 2 and 3. Current sampling combined with previous soil sampling, induced polarization surveys and the current magnetic survey identify a northwesterly trending area of elevated copper and gold soil geochemistry coincident with magnetic highs and high chargeability over an area of 4 km by 1.2 km. The geology is comprised of dykes and stocks of syenite and monzonite within andesite volcanics. Alteration is dominantly widespread propylitic with localised potassic alteration near and within intrusive rocks. This large area has seen only minor drilling in 1974 and 1990 but reported values were strongly elevated in copper and gold (unverified). A second parallel zone to the northeast of similar scale is yet to be fully delineated.

The Pinnacle Project is located within the Quesnel Terrane which is characterized by Late Triassic to Early Jurassic volcanic and sedimentary rocks of island arc affinity that have been intruded by a variety of intrusive phases related to the Late Triassic to Early Jurassic Hogem Intrusive Suite. The property was first explored in the early 1970’s following the identification of anomalous stream sediment samples from reconnaissance prospecting in the central portion of the property at the Aplite Creek Zone where chalcopyrite and secondary malachite occur in a calcite-quartz breccia zone that can be traced for approximately 30 m, and which is approximately 7 m in width. Initial geochemical surveys, limited diamond drilling and geophysical surveys were completed and confirmed the presence of copper and gold mineralization at Aplite Creek. Highlights of the historical work at Aplite Creek include a diamond drillhole drilled by BP Resources in 1990 that reported 6m @ 6.4 gpt gold. Since 2014 the property has seen extensive exploration to the south of the Aplite Creek area including diamond and percussion drilling, induced polarization (“IP”) surveys and airborne magnetic/EM surveys that have identified several broad areas that exhibit widespread porphyry-style alteration in areas of extensive cover. At the Elbow Zone, five of the six diamond drill holes returned anomalous gold, highlighted by 94 metres grading 0.34 g/t gold in DD15ELB001. At the Sooner Zone, diamond drilling in 2015 encountered broad intervals of anomalous low-level copper associated with sericite-biotite alteration.

Eleven is earning a 70% interest in the Pinnacle Project from Pacific Empire Minerals Corp. (“PEMC”). Under the terms of the Agreement, Eleven can earn a 70% interest by completing $5,700,000 in exploration expenditures on the Project, paying PEMC an aggregate of $375,000 in cash payments and issuing 3,500,000 common shares to PEMC by the fourth anniversary of the agreement. Following the exercise of the Option, PEMC will retain a 30% free-carried interest in the Project up until the date that Eleven publishes a NI 43-101 compliant Pre-Feasibility Study (“PFS”) on the Project. Following completion of the PFS, PEMC and Eleven will form a joint venture with Eleven holding a 70% initial interest and PEMC holding a 30% initial interest. If the total cumulative common shares granted to PEMC is less than 5% of the total issued and outstanding common shares of 1111 Acquisition as of the date of the PFS, 1111 Acquisition will issue to PEMC such number of common shares which will bring PEMC’s ownership level to 5% of the total issued and outstanding common shares of Eleven.

Historical work at Aplite Ridge including older drill results were compiled from public domain reports submitted to the provincial government (Assessment Reports) and predates NI 43-101 standards. The Company is treating this data as historic in nature but considers it an effective guide to exploration potential. Subsequent work by Pacific Empire and their previous partners was to 43-101 standards and full QAQC disclosure was provided in the Pacific Empire company disclosure record as found on their website and as posted in press releases on SEDAR. Drilling at Aplite Creek mentioned herein was completed by BP Resources Canada Ltd in 1990 and results were reported in BC Government assessment report #20943.

MMI samples: analysis by SGS Minerals. The testing procedure begins with weighing 50 grams of the sample into a plastic vial fitted with a screw cap. Next is added 50 ml of the MMI-M solution to the sample, which is then placed in trays and put into a shaker for 20 minutes. (The MMI-M solution is a neutral mixture of reagents that are used to detach loosely bound ions of any of the 53 elements from the soil substrate and formulated to keep the ions in solution.) These are allowed to sit overnight and subsequently centrifuged for 10 minutes. The solution is then diluted 20 times for a total dilution factor of 200 times and then transferred into plastic test tubes, which are then analyzed on ICP-MS instruments.

Robert Cameron, P. Geo. is a qualified person within the context of National Instrument 43-101 and has read and takes responsibility for the technical aspects of this release. 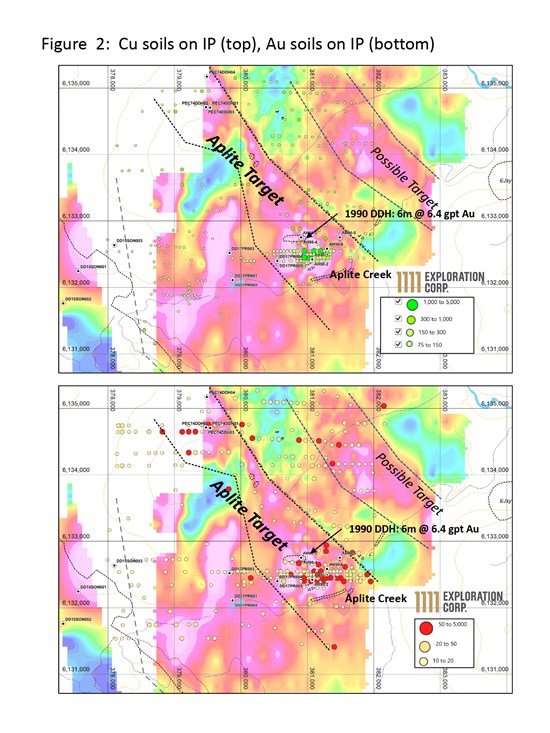 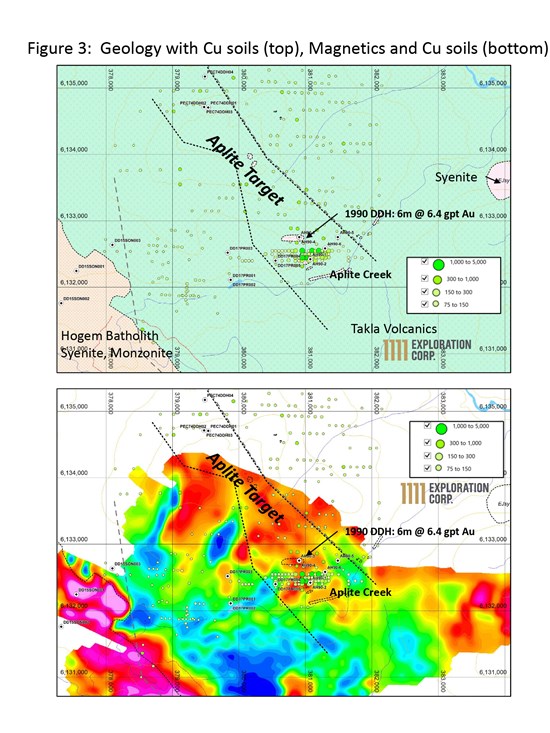 Not for dissemination in the United States or through U.S. newswires

To view the source version of this press release, please visit https://www.newsfilecorp.com/release/116201 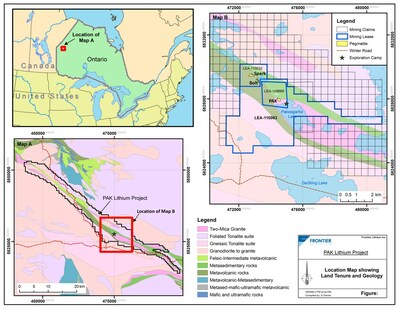 Including the Maiden Estimate for the Saúva Deposit Containing 578 kt (1.3 Blb) of Copper and 1.1 Moz of Gold in Indicated Mineral Re… 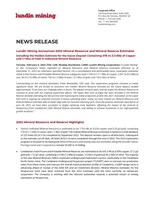 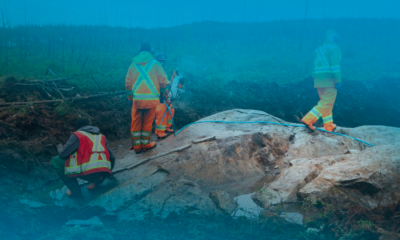 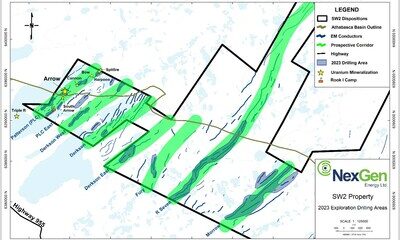 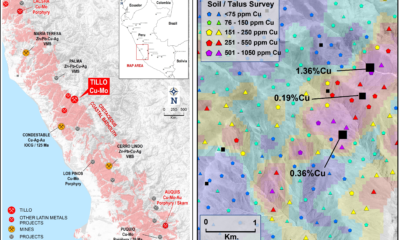 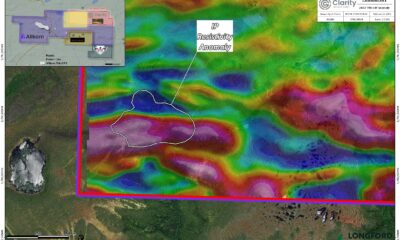