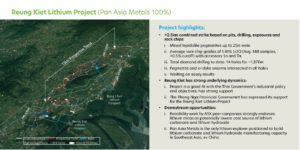 Low cost operations that are close to both industrial inputs and target markets are the drawcards of Pan Asia’s lithium and tungsten projects in Thailand.

Of these, the company’s focus is currently on Reung Kiet, which is located within a region of previous large-scale tin mining, and where exploration to date has generally defined consistent high grade lepidolite (lithium-rich mica) in pegmatites across a strike of more than 2.5km.

Here’s why this is interesting.

Lepidico (ASX:LPD), the only other ASX company known to have lepidolite projects, noted in its definitive feasibility study in May last year that its Karibib project in Namibia had estimated operating costs of about US$1,656 ($2,141) per tonne of lithium carbonate equivalent (LCE) and all-in-sustaining costs of US$3,221/t of LCE.

This places Lepidico at the low end of the costs curve and compares favourably with geothermal lithium brine-focused Vulcan Energy (ASX:VUL), which estimated operating costs at about €2,640/t (US$3,215/t) of lithium hydroxide.

Pan Asia managing director Paul Lock told Stockhead he was confident that his company could better Lepidico’s estimates, which are based on the shipping of concentrate to the Gulf.

“Our project is potentially bigger. Our grades from our rock chips and drilling are higher and we’re closer to all of our inputs and markets,” he explained.

“We don’t have to ship to move on from concentrate to either (lithium) carbonate or hydroxide.”

This is thanks to its projects’ location between two major industrial economies – Thailand and Malaysia – and is in line with its focus on moving downstream where the “real” margins are at and producing lithium chemicals first before moving on to battery precursors.

“This is really important in this calculation when you’re looking at investments, as concentrates are a purely commodity market, so you get whipped around by the price cycle,” Lock explained.

“But as you move further downstream, that volatility in price starts to reduce and the number of customers expand.

These include tax incentives for the development of hybrid electric vehicles and battery manufacturers.

Car manufacturers have already responded to this push with BMW and Mercedes launching battery assembly plants and and already producing PHEVs in the country while Toyota moved its Prius battery recycling hub from Belgium to Thailand in 2019.  Energy Absolute and GPSC have committed to Lithium battery production.

What this means is that Thailand has a growing market for lithium and Lock believes that Pan Asia has the inside line to capture lithium carbonate or hydroxide manufacturing in the country.

It’s not all about lithium for Pan Asia.

The company also holds the Khao Soon tungsten project where drilling has returned grades that are generally higher than those of its peers.

“We’re in one of the lowest cost operating environments and we expect Khao Soon to be one of the bigger tungsten projects situated near the bottom of the cost curve,” Lock noted.

Pan Asia holds about 40sqkm of ground at Khao Soon and has identified over 10 prospects that it is drilling.

These compare favourably with the average of its global peer group – just above 0.2 per cent tungsten.

Like lithium, demand for tungsten is also strong with Global Market Insights forecasting that it will grow at an annualised rate of about 8 per cent per annum for the rest of the decade.

Looking ahead, the company expects to start reporting drill results from Reung Kiet in about two weeks.

Lock adds that Pan Asia will also move to double shift on the project to drill it out to a resource, which will be a mixture of inferred and higher confidence indicated resources and possibly a bit of measured resource as well and could be completed by November this year.

This would allow the company to move into scoping studies and pre-feasibility studies.

Lock adds that Pan Asia will also send one of the rig crews to do more drilling at Khao Soon.

“We could do a tungsten resource now, but we want to report a meaty resource so we will do more drilling on a number of areas,” he explained.

Pan Asia also remains on the lookout for new projects, though Lock cautioned that certain criteria had to be met.

“I’m an ex-project financier. I used to finance mining projects and everything that we look at has to be doable and we’re looking at its position on the cost curve, so it’s either grade or operating environment.”

This article was developed in collaboration with Pan Asia Metals, a Stockhead advertiser at the time of publishing.

This article was originally published at https://stockhead.com.au/resources/pan-asias-thai-projects-eye-low-end-of-lithium-tungsten-cost-curve/