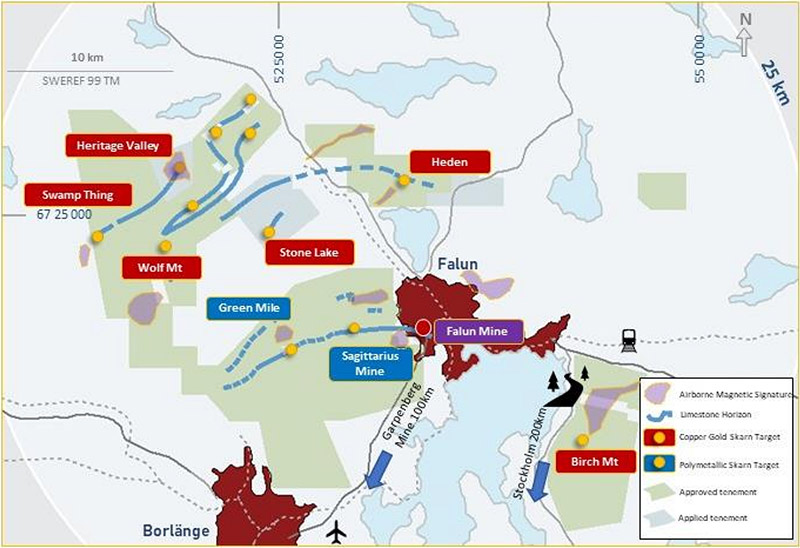 Alicanto is hunting for ‘the big one’ at Greater Falun.

This project neighbours a bunch of big operations including the 28-million-tonne Falun deposit, mined over ~1,000 years at some pretty phenomenal grades until the 1990s.

But when Alicanto first acquired Greater Falun earlier this year, it believed that some of the traditional understandings of the region were not 100 per cent accurate.

It will also be the first drilling since Alicanto made a major breakthrough by establishing that the dominant mineralisation is copper-gold skarn, not a Volcanogenic Massive Sulphide (VMS) system as long believed.

The program will test new targets, as well as look to extend mineralisation around known major copper gold systems.

The ultimate goal for Alicanto is to establish a high grade +20-million-tonne copper-gold resource capable of supporting a central processing hub.

“We have mapped more than 2,000 outcrops and historical surface workings which have resulted in us discovering seven copper-gold skarns at surface,” he says.

“When we overlay this information onto the large volume of historical and recent geophysical survey data, an impressive picture of the Greater Falun Project is forming that has not been seen before now.

“This is the largest program ever undertaken within the Greater Falun project and will see us test the multiple EM signatures, IP Anomalies and copper-gold and polymetallic skarn targets we have discovered.”

The first target called Green Mile (Gronbo) is within the Limestone Mineralised Zone, 10km along strike from the world-class Falun mine.

“We have started the drilling program with the untested EM conductors at Green Mile along strike from the historic, high-grade copper-gold Falun mine, which produced 28 million tonnes at 4 per cent copper, 4g/t gold, 5 per cent zinc, 2 per cent lead and 35g/t silver up until 1992,” George says.

“The conductors are coincident with footwall alteration and high-grade rock chip results mapped on surface.”

More info on the next set of drill targets will follow in the near future.

This story was developed in collaboration with Alicanto Minerals, a Stockhead advertiser at the time of publishing.