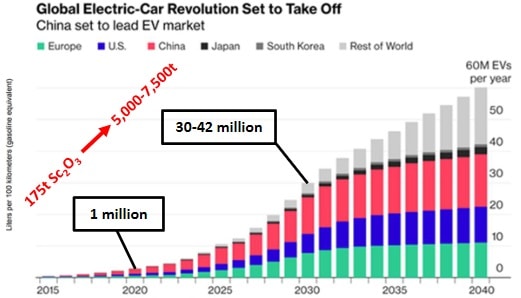 Imperial Mining Group Ltd. (TSXV: IPG | OTCQB: IMPNF) is an early stage scandium junior miner (also with two prospective gold properties) in Quebec hoping to cash in on the move towards scandium-aluminum alloys for lightweighting of vehicles such as spacecraft, airplanes, and especially electric vehicles (EVs).

Scandium is still not widely used due to limited supply and scandium being expensive. This means the scandium supply chain is minimal as the industry has not yet grown. The current global scandium supply is only about 35 tonnes pa of scandium oxide. Demand is forecast to boom to as high as 1,800 tonnes pa by 2035 (Bloomberg forecast, 2018). If that were to happen, it would mean a 51-fold increase in scandium demand over the next 15 years. Interestingly the 2020 Bloomberg forecast for electric vehicles is for them to rise from 2.2M in 2019 to ~54M by 2040. That would be a ~25-fold increase. So clearly the EV boom has the potential to be a strong driver of scandium demand if scandium-aluminum lightweighting becomes widely adopted.

A major issue with EVs is getting their purchase price down which should lead to mass adoption this decade. If an EV weighs less then it can use a smaller battery to get the same range, thereby lowering the EVs cost. Looking ahead this decade if scandium-aluminum alloys become much more widely used, this should lead to a virtuous cycle of cheaper scandium as supply expands and far greater scandium use.

The airline industry and the space industry are other examples where lightweighting becomes vitally important to reduce fuel costs.

This brings us back to Imperial Mining Group, which has one of the lowest market caps (currently C$25M) of all the junior scandium miners as shown below.

Imperial Mining’s focus is on the development of its high-quality scandium-REE Crater Lake Property in northeastern Quebec, Canada. The 100% owned property consists of 57 contiguous claims covering 27.8km2. It has a large 6km diameter complex host to high-grade scandium and niobium deposits. Imperial Mining is currently working to expand the resource.

Imperial Mining’s goal is to define a scandium-REE mineral resource of a minimum of 10 Mt. Recoveries to date have been strong at 97-98% for scandium and 79% for rare earths.

Well funded after recent oversubscribed capital raises, Imperial Mining plans to spend C$2M to achieve their 2021 plans. These include further drilling, metallurgical recovery additional method testing (April), a 43-101 Resource report (May), and a PEA (July-August). Beyond that next will be permitting and a completed Feasibility Study by end 2023, subject to financing.

The Company plans the Crater Lake Project to be a small open-pit operation with on-site magnetic concentrator and/or sensor-based sorting resulting in high scandium recoveries. It is expected that the Project will be a low CapEx, OpEx due to the high grades and using simple process recovery methods.

Given the potential exponential growth ahead if scandium lightweighting takes off in a big way, first mover scandium junior miners such as Imperial Mining Group can be big winners.

Risk is high and patience is needed. One plus for investors is Imperial Mining also has some gold prospective properties in Quebec (La Roncière  and Opawica), with a recent increased interest in La Roncière. Always good to have some gold as insurance.

We will continue to follow the Imperial Mining Group story as it unfolds. Stay tuned.

The post Betting on scandium-aluminum lightweighting to take off, Imperial Mining Group is set to benefit from EV market demand appeared first on InvestorIntel. 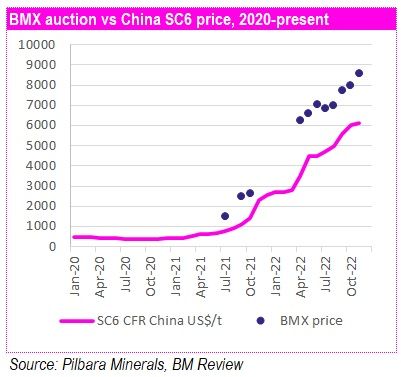 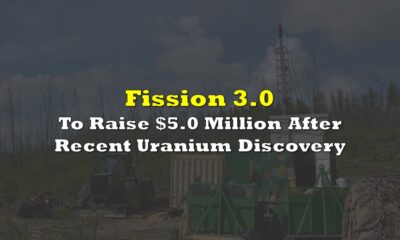