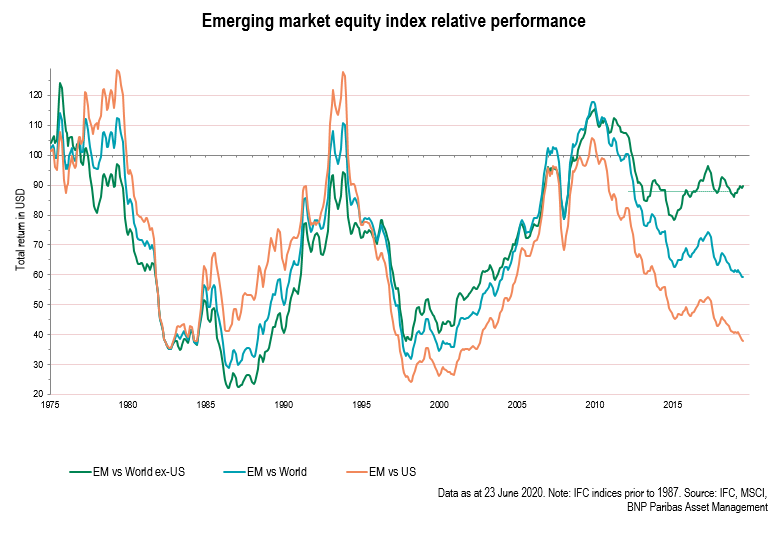 The COVID-19 pandemic has struck economies and societies hard and those in emerging countries more so than elsewhere. As a result emerging market equities have extended the run of underperformance relative to their developed market peers. Vincent Nichols, investment specialist for emerging market equities, outlines the prospects for and opportunities in the asset class.

How is the pandemic evolving in the emerging world?

As we all know, the virus originated in
China, which accounts for about 40% of the MSCI Emerging Market equity index,
and as the impact of the outbreak was being felt there, emerging market
equities began to underperform as an asset class in late January before diving
steeply lower with the rest of the world in late February and continuing lower
through the middle of March. This poor run has added to a decade of
underperformance to other markets (see Exhibit 1).

What may be surprising though is that for
the full first quarter of 2020, Asian markets actually outperformed not only
the rest of EM, but the developed markets as well. Ironically perhaps, China
was the top-performing major market in the world during the quarter. It was
actually Latin America that fared worst during this time as the world’s
supplier of raw materials.

We are now witnessing a surge of confirmed
cases in Latin America, in Brazil in particular, but also in Peru, Chile and
Mexico. The situation in India is also deteriorating rapidly as it has quickly
moved up the list of countries for total confirmed cases, now ranking fourth.

Unless Brazil and India are able to slow
the spread of the virus significantly in the coming weeks, they could
conceivably have the most confirmed cases in the world in the not too distant
future.

However, the developing world is far less well equipped to combat the crisis. In the US, Europe and the more developed parts of Asia, many people can work from home or even not work at all for a while to protect themselves.

The world’s poorer populations do not have this option. Many live in densely populated cities where the virus can spread like wildfire. The humanitarian crisis there is several degrees worse.

What are
the investment implications?

There are many reasons to believe that a
reversal in relative performance for emerging market equities is ahead, in both
the short term and the intermediate to long term.

Just simply looking at valuations, EM is relatively attractive for equity investors. EM valuations have perennially traded at a discount to developed markets, but even against longer-term averages, that discount is now approaching extreme levels.

While emerging markets also face potential macroeconomic headwinds, the growth forecasts are much better for emerging markets than for developed markets. The IMF recently updated its global growth projections, marking a significant deterioration from projections in April.

Even the rebound in 2021 is still
expected to be better for the developing world. What is the opportunity cost to
investors who choose to avoid EM if economic growth does rebound more or less
as expected in the coming years?

And what is to be made of the aggressive fiscal and monetary easing in developed
economies, the US in particular? This probably is a relative benefit in the
short term for the developed world and this may already be reflected in market
performance.

Continued loose fiscal policy and market nervousness over attempts to reverse central bank balance sheet expansion probably limit the upside of the US dollar relative to EM currencies despite the many challenges EM countries face.

A weak US dollar would be a tailwind for emerging markets. Additionally, developed market stimulus should have a positive secondary effect on EM economies. To boot, it comes free of any additional fiscal burden for those countries.

The already weak financial sector has drastically underperformed the broader market so far this year and we believe that is justified and expect it to continue. Here is why. The ability of many EM governments to match the far-reaching stimulus packages of Western governments is limited.

In many emerging markets, monetary policy stimulus will likely flow through the financial system, which places an extra burden on financial services companies. Many will likely bear the long-term brunt of this in the form of heightened strain on the quality of their assets for many years to come.

The probably most overlooked investment opportunity is also mostly outside of EM benchmarks: gold mining companies. Gold prices have the unique feature of likely benefiting from an increase in money creation (aimed at improving economic health and supporting asset prices).

As long as many central bank balance sheets are bloated, it is unlikely that gold prices will see a material reversal. On average, gold mining companies have drastically improved their balance sheets since 2014, are growing revenues, are increasing dividends and have been trading at deep discounts relative to net asset value.

I note that the price of energy – one of the largest costs for gold miners – has fallen sharply during the pandemic. Lastly, many gold mining companies actually have relatively strong ESG profiles compared to the wider industry. Overall, we believe that is an attractive picture.