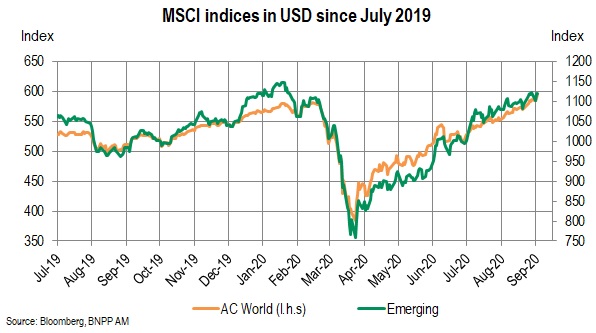 During the bizarre summer of 2020, investors seemed to focus only on the good stuff and to push the health and economic crises to the back of their minds. The rise in global equities continued for the fifth consecutive month and, despite some rises in August, bond yields remain low thanks to central banks’ actions.

The glass is half full … or maybe even more so

Global equities posted a fifth consecutive monthly gain in August (6.0% for the MSCI AC World index in US dollar terms), lifting them above where they were at the end of 2019 (3.5%). The MSCI Emerging Markets Index rose by 2.1% in August but still lagged by 1.2% over the year to date. This broad-based monthly rise in equities occurred despite doubts about whether the rebound in activity is sustainable and concerns over the rise in COVID-19 infections.

After the sharp contraction in second quarter GDP in developed economies and most emerging economies, activity improved markedly in June and July but several indicators were more tentative in August.

The message from central banks was supportive. On 27 August, the Fed Chairman’s speech confirmed that US monetary policy would remain very accommodative for a long time to help underpin employment and activity.

While negotiations on further fiscal packages remain an uphill struggle (especially in the US, where President Trump has had to extend some measures by executive order), additional spending, partly financed by the Next Generation EU plan, is planned in the eurozone.

Geopolitical issues blew hot and cold without upsetting financial markets for any length of time. After some diplomatic tensions, Sino-US relations improved as trade negotiators signalled progress and reaffirmed their commitment to the phase-one trade deal signed in January.

Finally, on the health front, despite signs of the coronavirus resurging, particularly in Europe, the number of hospitalisations and deaths remained below the previous peak. Investors were reassured by the fall in the number of daily cases in the US after a spectacular surge in July. There were also reports of several advances in medical research. US and European laboratories achieved initial encouraging results during vaccine test phases.

Broad-based rise in equities. New all-time highs in the US

Within developed markets, US equities outperformed. After several near misses, the S&P 500 Index first surpassed its previous high point on 18 August and then hit numerous further records to end the month up by 7.0%. The Nasdaq composite index continued to advance. It closed the month at a new all-time high (+9.6%) and was up by 31.2% since the start of the year. The rise in Japanese equities (+8.2% for the Topix index) was only temporarily halted by the announcement of the prime minister’s resignation for health reasons. In the eurozone, the EURO STOXX 50 index advanced by 3.1% in August but remains 15% below its year-high and down by 12.6% compared to the end of 2019.

Is the ECB more timid than the Fed?

In Europe, statements were less sweeping than those from the Fed, but Philip Lane, the ECB’s chief economist and a member of the Executive Board, reiterated that the ECB remains ready to adjust all its policy tools if it were necessary for inflation to meet its medium-term objective.

Eurozone bond market movements became more volatile in the second half of August when investors gradually realised that the next few weeks would be marked by large volumes of bond issuances. The yield on the German 10-year Bund, which stood at -0.52% at the end of July, had a bumpy ride, bringing it to -0.40% by the end of the month (+13bp), close to its level at the start of July.

The auctions at the very end of the month were somewhat less well taken up. This was particularly the case in Italy, where the situation contributed to upward pressure on long-term interest rates, even though the BTP market had held up well to that point. By mid-August, the spread with the German 10-year rate had fallen to 138bp, its lowest since 21 February. It ended the month at 149bp.

The European Commission announced that the first additional issuance for the funding of the SURE (Support to mitigate Unemployment Risks in an Emergency) programme adopted on 19 May would occur in September. This news is likely to weigh somewhat on the eurozone’s best-rated states.

Another factor may explain the erratic movements seen in August in eurozone bonds: The ECB’s purchases of securities under the pandemic emergency purchase programme (PEPP) fell to below EUR 15 billion a week in August (from almost EUR 20 billion a week in July). The amounts purchased so far under the PEPP total nearly EUR 500 billion, with a total envelope of EUR 1 350 billion. As the ECB’s latest comments raised no hopes of any additional increase in this amount in the near future, some investors envisage that this relatively low pace of purchases could be maintained. The purchases could then continue until September 2021 but the ECB would be less active in the market.

However, the ECB continues to insist on the PEPP’s flexibility, over time and between markets. Isabel Schnabel, a member of the Management Board, reiterated that the emergency target (market stabilisation related to the risk of fragmentation), which justified massive purchases in the spring, had been fulfilled and that purchases must now help bring inflation back towards its target.

Unlike the Fed, the ECB is unlikely to change its medium-term inflation target, which the governor of the Banque de France considers essential, at least until the conclusions of the strategic review are known. In July, inflation remained modest (0.4% for the total index year-on-year). The July acceleration in core inflation (from 0.8% to 1.2%) was linked to the shift in the timing of summer sales compared to 2019 and corrected in August.

Everything looks brighter during the summer. What awaits us in September?

During the summer months, investors chose to focus on the good news on the macroeconomic, microeconomic and pandemic fronts. They could instead have been concerned about the collapse in GDP and gloomy earnings in Q2, or about the resurgence in COVID-19 infections.

US equities’ strong run may have given the impression that the worst peacetime recession in a century has already been already forgotten. The IMF’s view is that ‘the extent of the recent rebound in financial market sentiment appears disconnected from shifts in underlying economic prospects.’ So, are investors being overly optimistic?

Rather than that, our analysis suggests that, on the one hand, investors are learning to live with the virus; on the other, they appreciate the exceptional economic policies that have been put in place since March. The notion of a recovery in activity rather than a prolonged recession after the collapse in GDP growth in Q2 is fairly widespread. Similarly, the possibility of broad-based deflation has been quickly put aside.

The highly proactive monetary and fiscal policies have therefore enabled investors to remove the two main downside risks from their minds and to adopt a relatively favourable scenario for the medium term.

However, looking at a number of assets (such as the rise in gold prices), we can see that some uncertainties remain. And investors still seem reluctant to take a large overweight in equities: The new all-time highs seen in the S&P 500 index have not been seen across the board.

The authorities seem determined to do everything in their power to prevent a general lockdown of the population. This is reassuring for economic activity even though some sectors are still being penalised by social distancing measures. The end of the summer holiday period also gives rise to concerns about the resumption of the pandemic.

Uncertainty remains the order of the day and could give rise to further volatility in the short term. Given our medium-term scenario and our analysis of market dynamics, we see equity corrections as buying opportunities.