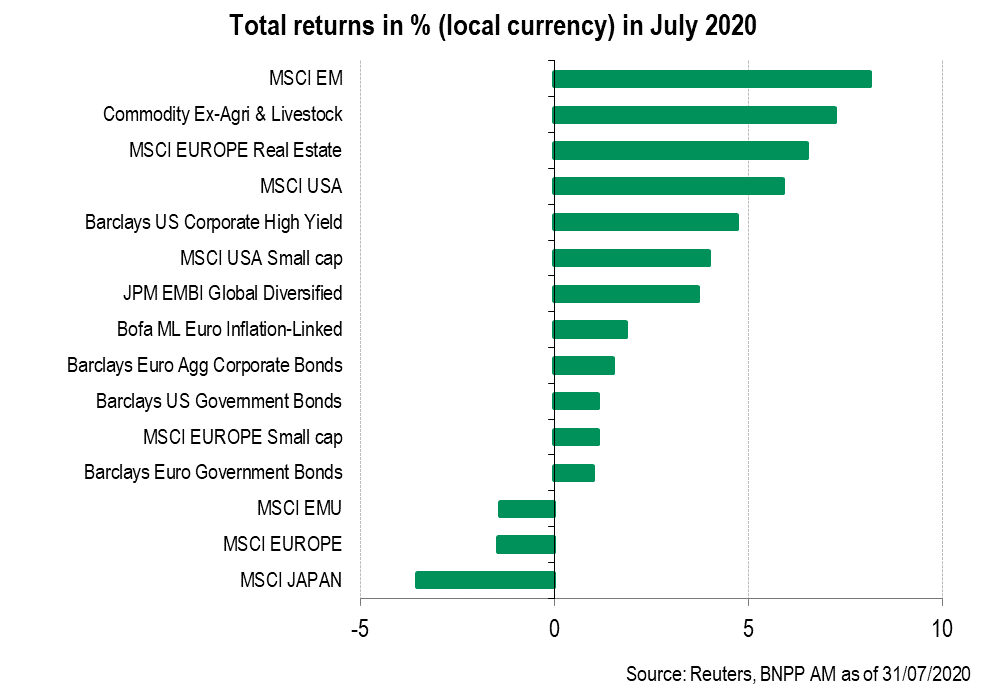 US and global equities rose sharply in July, but the marked fall in the US dollar, the rise in gold, the drop in long-term rates and the still-rolling pandemic show that the story may not be so simple. In the coming weeks, investors will have to find the right answers – or at least ask themselves the right questions.

Economic uncertainties, policy commitments and concerns about the pandemic

While global equities rose in July, this masked the fact that investors remained concerned about significant issues. The 5.1% rise in the MSCI AC World index in US dollar terms compared to the end of June, and the 8.4% rally in the MSCI Emerging Markets index in US dollar terms, coincded with a sharp fall in the US dollar. The currency lost 4.2% against a basket of developed currencies (DXY index) and also retreated against major emerging market currencies.

In local currency terms, the main equity indices in Europe and Japan ended the month down after moving sideways during the first three weeks and pulling back at the end of the month.

The 10.9% surge in the gold price took it to a record high at over USD 1 975 per troy ounce. This, and the additional easing in long-term rates, better illustrated investor concerns about signs of a resurgence of the COVID-19 outbreak and renewed US-China tensions.

Throughout the month, bond auctions saw record low rates across the curve, showing that demand for safe haven assets was not weakening.

US up, Europe and Japan down

Still, US equities rose further in July (+5.5% for the S&P 500). They did so mainly because company results, although very poor, proved to be better than expected at the start of the reporting season.

The most sought-after sectors globally were technology, basic materials, utilities and consumer discretionary and staples.

Economic activity has rebounded since May. What’s next?

While economic data was quite positive, it wasn’t entirely reassuring in terms of the coming months.

On the one hand, the improvement in activity surveys in June and July was confirmed and first estimates of national accounts showed a drop in GDP in the second quarter that – even though remarkably steep – was less pronounced than expected.

On the other hand, the rebound in consumer confidence appeared to be stalling. This raised questions about the momentum for consumption, especially given that the recovery in employment in the US appeared to weaken and European short-time working schemes are gradually being adjusted.

The 3.2% year-on-year increase in Chinese GDP in Q2 (after a contraction by 6.8% in Q1) confirmed that activity could rebound after an economic shutdown, but it also highlighted weaknesses, particularly in private domestic demand. It’s an outcome that may be seen in the rest of the world in Q3. This would require economic policies to continue to support activity.

The tone of major central banks remained unchanged: The US Federal Reserve and the ECB are still cautious in their analysis of the economy and are indicating that they will maintain their highly accommodative monetary policies.

The first week of July saw the resolution of the case triggered by the 5 May ruling of the German constitutional court. Without this, the Bundesbank could have been legally forced to halt its participation in the ECB’s public securities purchase programme (PSPP).

Investors were then able to shift their attention to the fiscal aspects of EU solidarity.

After delicate and much longer-than-expected negotiations, EU leaders agreed on the Next Generation EU stimulus package on 21 July.

The principle of common debt and direct grants (EUR 390 billion out of EUR 750 billion) paid to countries most affected by the economic consequences of the pandemic was accepted. The accord came at the cost of a few concessions made to the ‘frugal’ countries, which have, among other things, obtained greater rebates on their budget contributions.

Even though some questions remain unanswered, the affirmation of EU solidarity sent a strong political signal. It was welcomed by investors and contributed to the rise of the euro. The currency occasionally topped USD 1.19, its highest since May 2018.

The Next Generation EU stimulus package was seen as very positive for southern member states. The Italian bond market is viewed as the main beneficiary. The yield on the 10-year BTP eased by 25bp from the end of June to 1.01% at the end of July. The previous day it had fallen to 0.97%, its lowest since 24 February.

The performance of the Spanish and Portuguese bond markets was less pronounced, with a monthly fall of 13bp for 10-year maturities.

Short-term hurdles are tricky to judge, but help is at hand

In the coming weeks, investors will need to form firm views on a number of topics.

While it might have been easy to foresee a drastic drop in activity followed by a rebound after the containment measures were lifted, it will be tougher will be to trace out what happens next as the main consumption catch-up effects have already been seen and yet many questions remain. Are households going to keep back some of their savings if they believe employment conditions are likely to worsen? Will companies decide to invest when many uncertainties remain?

These are tricky considerations, but investors will find some help at hand. Firstly, governments remain committed to supporting their economies, whether through monetary or fiscal instruments. This should ensure low rates for a long time as well as negative real rates, which appears to be favourable for equities.

Also, while second quarter corporate earnings have, as expected, deteriorated, there are several reasons to remain somewhat optimistic. In the US, earnings and revenues generally beat expectations and the outlook from management and financial analysts is encouraging. In particular, upward earnings revisions are likely to support equities.

The macro and microeconomic aspects, even though exceptional due to the unique nature of the current crisis, still look favourable in the medium term. That said, the COVID-19 pandemic unfortunately remains yet to be curbed.

In addition, the political and geopolitical environment looks hard to read just a few months out from the US elections.

In the short term, confidence should make the difference. While households have been concerned over the re-emergence of infections that could lead to further restrictions in travel and social gatherings, investors are focusing on progress in the search for treatments or vaccines. The difficulties inherent in this type of research, the results of which are hard to interpret, could lead to more erratic swings in equities. Given our medium-term scenario, any correction should be seen as a buying opportunity.

Writen by Nathalie Benatia. The post Equity market: Take a moment – there’s a lot to think about appeared first on Investors’ Corner – The official blog of BNP Paribas Asset Management. 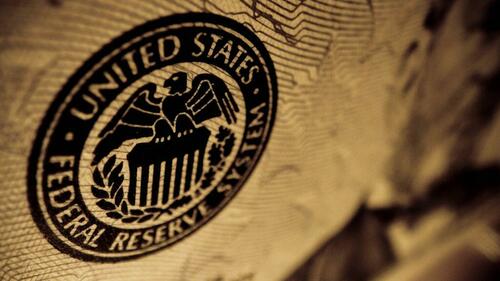 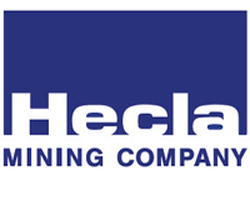