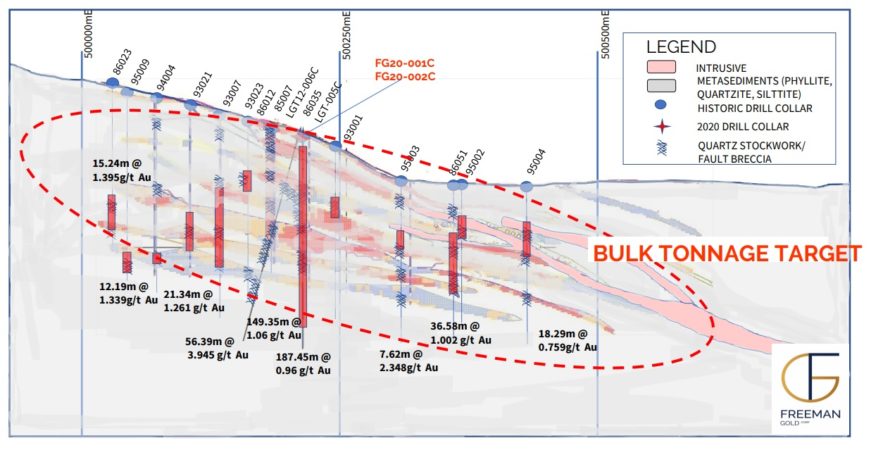 Freeman Gold (FMAN.C) has now completed 7,149 meters of core drilling in 35 holes at its Lemhi gold project in Idaho. 26 holes have been logged to date, and of those 26, no less than 17 contained visible gold .

According to a comment from Will Randall, Freeman’s CEO, the historically defined zones at Lemhi had greater continuity than expected, and that was the reason to extend the drill program from the initially estimated 5,000 meters (which was predominantly focusing on twinning historical holes and completing some infill drilling). Freeman appears to be happy with the initial results as the thickness and extent of the mineralized structures has been confirmed over a 600 by 700 meter area, while gold mineralization has been encountered to depths up to 260 meters.

The core samples have been sent to ALS in Vancouver, and the company estimates it will still take about 4-8 weeks (!!) before it will be in a position to publish assay results as ALS has provided Freeman with an expected turnaround time of 60 days for its most recently submitted samples. We definitely had hoped Freeman would have been able to rewards its shareholders with initial assay results by Christmas, but it’s now looking like the second half of January may be a more reasonable estimate to see the assay results. Disappointing, but the lab delays in North America have been well documented this semester as waiting times regularly exceed 2-3 times the usual turnaround times.

Disclosure: The author has a long position in Freeman Gold. Freeman is a sponsor of the website. Please read our disclaimer.