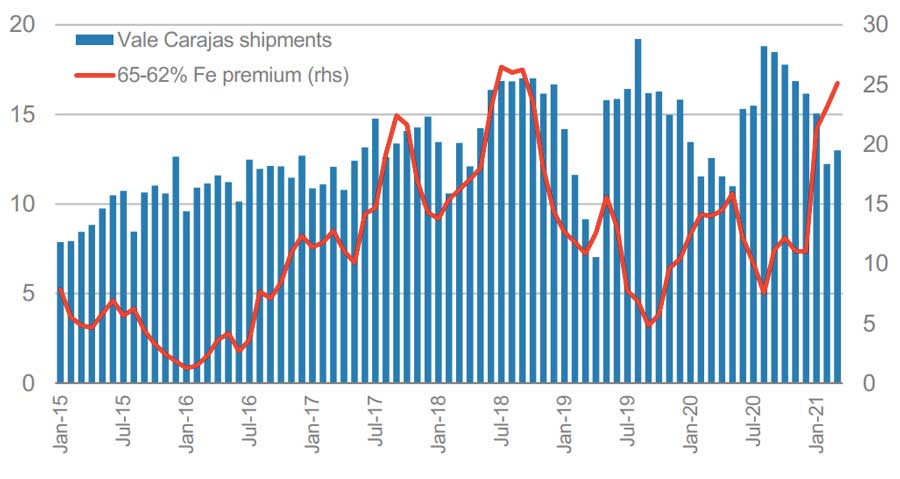 ‘Guy on Rocks’ is a Stockhead series looking at the significant happenings of the resources market each week.

It was another good week for gold which hit seven-week highs of $US1,798 ($2,323) an oz last Wednesday, while Bitcoin was off 9 per cent to $US49,672 for the week. Of note was the Chinese government clearing the way for an import of around 150 tonnes of gold ($US8bn) sourced from Australia, South Africa and Switzerland.

Despite noises about Tangshan curbing emissions and port stocks being up 9 million tonnes (7 per cent) year to date – the highest volume since May 2019 – iron ore futures traded at 10-year highs of $US186/tonne.

It appears that steel demand, driven by rapidly escalating construction demand (figure 2), is picking up at a very fast pace as Chinese crude steel production reached 94 million tonnes (+19 per cent year on year and up 14.4 per cent on a quarterly basis).

Blast furnace utilisation however in Tangshan has dropped to less than 60 per cent as of last week, down from 80 per cent at the start of year.

The nationwide utilisation rate also dropped by 4 per cent from March levels. At the same time, utilisation of China’s electric arc furnaces has risen to 71 per cent versus an average of 56 per cent in 2020, implying rising scrap use in China’s steel industry.

Again, supply issues seem to be below expectations with Vale, BHP and Rio all reporting lower output. While Vale is maintaining guidance in the range of 315-335 million tonnes, this looks optimistic.

While global stimulus appears to be doing its job, the only macro dampener appears to be US President Joe Biden’s desire to double capital gains tax for wealthy Americans!

Elsewhere, copper end-use consumption is running at record levels relative to mine supply, with scrap metal unlikely to fill the void, which indicates a record refined deficit eclipsing 2003/04 is a real possibility.

Palladium’s bullish run also looks set to continue as automotive output recovers. This may lead to an increase of rhodium to palladium substitution.

There appears to be a worldwide auto chip shortage, a possible short-term negative on palladium, platinum, copper and aluminium. This is a trend, according to CitiResearch that is likely to continue until June this year, affecting about 530,000oz of palladium (~5 per cent of demand), ~130,000oz of platinum, ~120,000 tonnes of copper and ~750,000 tonnes of aluminium semis.

Restocking later in CY 2021 is likely to see a sharp turn around in demand for these metals.

The semi-conductor ‘chip’ shortage has contributed to the rapid pace of destocking across automotive manufacturers, with a corresponding drag on demand for platinum group metals (PGM’s) in particular. This has been most noticeable ex-China, where the de-stock is estimated at 2.5 million passenger vehicles, with US inventories at nine-year lows in Q4’21 (figure 3). One of our old favourites, Fenix Resources (ASX:FEX), had a solid quarter generating $21.8m in operating cash flow from 112,716 wet tonnes of lump ore from its 100 per cent owned Iron Ridge Prospect in the Weld Range of Western Australia.

Steady state production of 1.25 million tonnes of ore has been achieved with C1 cash costs of $93/tonne. This compares with my calculations off the back of the scoping study pre-listing in late 2018 which came in around $85/tonne.

This justified a Plasencia Cigar (Nicaraguan) at Cigar Social on Friday afternoon to celebrate this brilliant stock pick at around 6.4c early last year. A “rich and bold blend with hints of cocoa, leather, and spice” for those who are interested.

Next cab off the rank will be Farooq Khan-led Paulsen’s East iron ore mine (Strike Resources ASX:SRK) that recently received approval for the Project Management Plan from the Department of Mines, Industry, Regulation and Safety (DMIRS). You will no doubt hear more about this later in this column.

The big news last week was Orocobre (ASX:ORE) (figure 6) agreeing to merge with Galaxy Resources (ASX:GXY) for $1.4bn to create the world’s fifth largest lithium miner with JORC resources of 15 million tonnes of lithium carbonate equivalent (LCE) and production capacity for around 40,000 tonnes per annum of LCE.

In addition, the merged group will be vertically integrated and have the ability to service multiple markets and customers.

The balance sheet post-merger also looks impressive with just under $500m in cash and a diverse portfolio of assets (figure 7). I think this is a game changer in the lithium market and makes a lot of sense in an industry where much of the M&A activity does not actually add shareholder value.

Brockman Mining (ASX:BCK) hit 12c last week before settling at 6.8c on Friday on some big volume following its finalisation of a joint venture with Mineral Resources (ASX:MIN).

Mineral Resources will contribute $105m (and additional loan funds) and take a 50 per cent project interest to develop (within 42 months from joint venture formation) the Marillana and Ophthalmia projects in Western Australia.

The goal is to develop an iron ore hub producing a minimum of 25 million tonnes per annum. The development will see a berth located in Port Headland and a build, own, operate plan for a crushing plant at Ophthalmia.

The Marillana Channel iron deposit comprises JORC reserves of 48.5 million tonnes at 55.5 per cent iron (table 1). It is anticipated (based on the 2010 definitive feasibility study) to produce around 378 million tonnes over a 20-year mine life at 60.5 per cent to 61.5 per cent iron with sinter feed product through beneficiation and associated low-cost open cut mining.

The BCK announcement is a little thin on detail and I notice the last presentation on the company’s website is from 2016, so I will have to go back to the drawing board and crunch some numbers of project economics that are 11 years old. However, the project back then was showing a net present value of around $2.2bn based on production of 18 million tonnes per annum with a capital expenditure of $1.3bn to $1.9bn (depending on rail options).

I am sure MIN has in mind a far less capital intensive and staged project, but assuming a 25 per cent escalation in costs since 2011, free-on-board (FOB) C2 costs of $60 per dry tonne could deliver free cash flow of in excess of $160/tonne, which would equate to around $1.7bn in cash flow attributable to BCK’s 50 per cent interest (before any capital and interest repayments).

I will try and firm up these numbers over the coming weeks, but this is one to put on the radar. At a market capitalisation of around $250m there may be room to move from here….