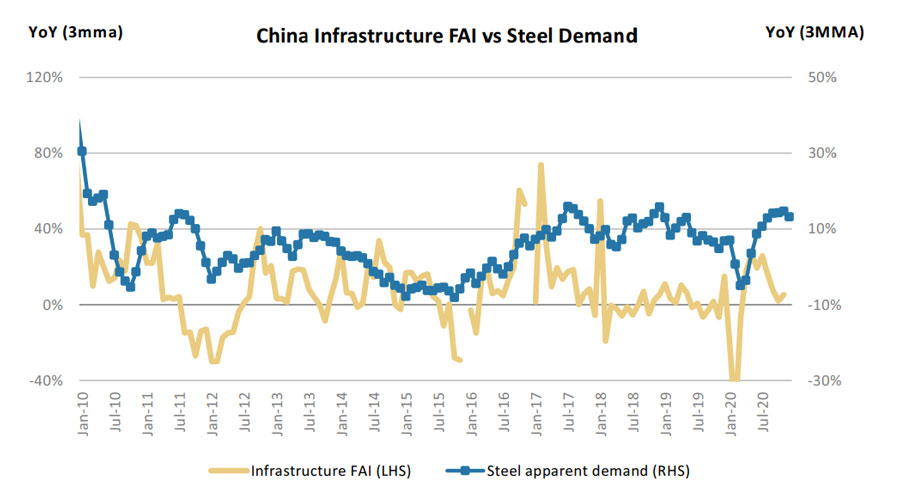 Guy on Rocks’ is a Stockhead series looking at the significant happenings of the resources market each week.

Market ructions: Sovereign risk and supply disruptions are your friends?

Another compelling round of economic data has come out of China, with apparent steel consumption for the second month of 2021 (2M21) up 22 per cent year-over-year (YoY) (+10.1 per cent December) and net steel exports rising by 34 per cent YoY, according to Citi Research (24 March 2021).

2M21 iron ore imports increased 3 per cent YoY driven by strong growth in steel production, which was up 13 per cent YoY over the same period.

I anticipate China’s steel end-use demand to hold up over 2Q21 but with iron ore demand coming under pressure if tightening anti-pollution policies begin to affect steel output. Iron ore imports were also up 3 per cent (5Mt) YoY to 182 million tonnes.

A quick look at some infrastructure and new machinery trends appears to match the increase in steel demand (figure 1) with falling stock to consumption ratios (figure 2).

Elsewhere the copper super-cycle seems to be getting a lot of airplay, with Trafigura predicting +$US15,000 a tonne in this cycle, with Citi a little a little more conservative at $US10,500+.

At least leaving it open ended means you have a 50:50 chance of being correct! But with China having a net short position in copper this is a good bet. With supply shortages possibly six to 12 months away, 2021 is looming as an interesting year for copper.

Citi Research (23 March 2021) is projecting (figure 3) the largest refined copper deficit in 15 years over the course of CY 2021, based primarily on holding 4Q’20 consumption levels constant.

Back to the work of Matt Watson (Precious Metals Commodity Management LLC). Check out the demand (figure 4) for palladium, rhodium and platinum as EV demand ramps up…

Freeport McMoRan (NYSE:FCX) recently copped a huge fine over slow smelter progress in Indonesia, with Energy and Mineral Resources Minister Arifin Tasrif stating that Freeport had not met the 90 per cent minimum progress set out in the working plan. The fine amounted to 20 per cent of the value of the company’s mineral exports.

On the local front, poor old Resolute Mining (ASX:RSG) (figure 5) had its mining licence at the Bibiani gold mine cancelled, which may cost the company around $US105m given it was due to settle the sale with Chifeng.

Refractory gold deposits aren’t my favourite, so it was a good strategic move to divest Bibiani, however it now looks like the minister has taken care of that for them. No doubt RSG will vigorously pursue a reversal of the licence cancellation. Ghana has been a relatively stable jurisdiction in West Africa so many were surprised to see the announcement. No doubt there will be more commentary to follow.

Civil unrest following the coup d’état in Myanmar has also seen the suspension in trading (3 February 2021) of Myanmar Metals (ASX:MYL), which is looking to develop the historical Bawdwin lead mine in which it now holds a 51 per cent participating interest with local partners WMM and East Asia Power (Mining) Company (EAP) – which each hold a 24.5 per cent interest.

Bawdwin comprises JORC reserves of 18.4 million tonnes at 6.4 per cent lead, 5.4oz/t silver and 3.4 per cent zinc. The definitive feasibility study outlines a $300m CAPEX and a 13-year mine life at 2 million tonnes per annum, with a four-year payback.

There is plenty of exploration upside over +10km of prospective rocks (figure 6), so for those contrarian investors who believe the situation in Myanmar will turn around, there could be some good money to be made.

The stock was trading at 7c with an enterprise value of just under $130m before the suspension (figure 7).

Throw in strikes and union disputes in Chile and Peru, local unrest in Bougainville, the exodus of explorers from Thailand and Indonesia, permitting delays and environmental sensitivities in Europe, and you don’t have to look far to see that supply disruptions caused by various sovereign/local issues are a ‘Black Swan’ event that is happening all too frequently.

While many of these events do not necessarily have an immediate effect on metal supply, on the junior end there is generally an immediate reduction or cessation of exploration and/or development, expenditure and funding.

As we have seen from the scandal ridden Simandou iron ore deposit (JORC resources of 2.4 billion tonnes at 65 per cent iron ore) in Guinea (West Africa), which was supposed to wreck the iron ore price years ago, supply disruptions can last decades or longer and throw out even the best analysts forecasts.

These events also reduce the appetite for the deployment of skilled expatriate staff into questionable jurisdictions who show as much enthusiasm for adventure as a cleaner dealing with a ministerial desk in Canberra following a Zoom call.

Anyway, fortune favours the brave, but not the reckless, so you will need to work out which category you fall in to. This is relatively easy five years or so down the track after you have dipped your toe in the water….

If you subscribe to the view that the majority of renewable energy targets are unachievable, then the case for uranium has never looked stronger.

The recent $218m fully underwritten placement/entitlement offer by Paladin Energy (ASX:PDN) supports the view that after 14 or so years in the wilderness, uranium’s day in the sun is getting closer.

By the look of the charts (figure 8), it appears uranium may be about to break out.

Peninsula Energy (ASX:PEN) appears poised to resume production this year after a final investment decision on its Lance Project in Wyoming.

Lance is the only project in the US permitted to use the low-cost pH ISR (in-situ-recovery-see figures 10, 11) process. This technology currently accounts for around 57 per cent of world production.

The board has an impressive 150 years of uranium experience and is led by managing director and metallurgist Mr Wayne Heili, a 30-year veteran of the industry with significant operational experience.

PEN has also received another boost with its inclusion in the Global X Uranium ETF (URA) index as of February 1 this year. Global X is currently accumulating shares in PEN.

The Lance project has an initial CAPEX of just $US6m and is forecast to produce around 3 million pounds (Mlb) of uranium (U3O8) over the life of mine (starting at 1.15Mlb/annum) on a 53.6Mlb U3O8 JORC resource.

All in sustaining costs (AISC) are projected to be $US41/lb over stage one and $US31/lb for stage two, which will require an additional $US43m in CAPEX.

Another selling point is that PEN is the only junior uranium producer with long-term sales contracts extending to 2030 (15 per cent of LOM production), with current contracts in place for $US51-$US53/lb U3O8 that should generate a net cash operating margin (C1 cost) of $US6-8m.

With both houses of the US supporting a long term-buying program from US uranium mines, including $US75m approved in the US FY 21 budget, it looks like market sentiment and the legislative tail winds are blowing in the right direction for PEN.

The post Guy on Rocks: Why the case for uranium has never looked stronger appeared first on Stockhead.