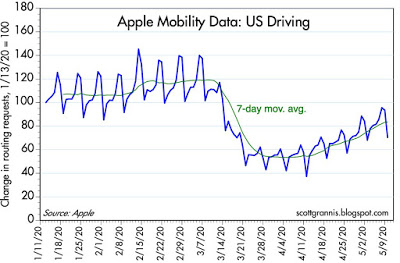 On March 19th I ventured to guess that we had probably seen the worst of the Covid panic. On April 6th I pointed to Covid green shoots. On April 19th I noted the beginning of the end of the shutdown. On April 27th I noted that things were looking up. A week ago I pointed to signs that showed the economy beginning to reopen. In today’s post I show further evidence of what is looking like a fairly strong rebound in economic activity. All of the charts in this post use data that is as recent as today and no older than two weeks. All of the charts—with one exception—reinforce the view that that there has been a significant amount of financial market healing and a meaningful recovery in economic activity. I show the charts in no particular order:
Chart #1

Apple has compiled data from millions of user’s iPhones all over the world to show that people are getting out of their homes and engaging in more driving, walking, and travel (see Chart #1). In the US, shown here, the low point in driving activity was Easter Sunday, April 12th. Since then, and using a 7-day moving average of the data (there is a distinct weekly pattern to the data, with the weekly low always falling on Sunday), there has been a substantial rebound of over 50% in the number of requests for driving directions. Not bad! 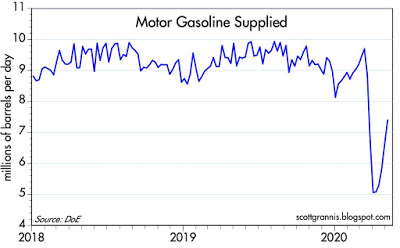 Chart #2 uses weekly data (last datapoint being May 8th) to show that the amount of motor gasoline supplied to the US market has increased 46% in the past four weeks. From that we can infer a significant increase in miles driven by individuals. Impressive! 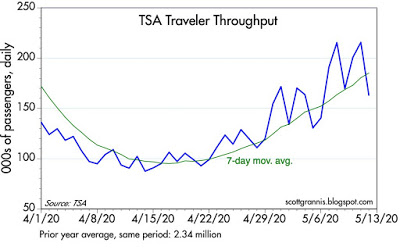 Chart #3 uses data from TSA to show that the number of passengers processed at US airport security checkpoints has almost doubled since the mid-April low (again, I’m using a 7-day moving average to eliminate weekly patterns). Of course, that is still more than 90% below the level of activity from a year ago, when 2.34 million people passed through TSA checkpoints every day on average. But the longest journey begins with a first step! 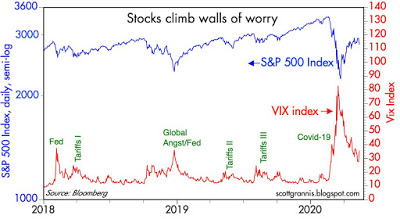 Chart #4 is my favorite for tracking how the level of market fear and panic influence the stock market. Things have definitely improved since prices hit bottom almost two months ago, but there is still a lot of  caution in today’s prices. Will the rebound we’ve seen so far continue? Will there be a new, sudden wave of infections? Another shutdown? How fast can businesses respond to the lifting of lockdowns? I would be worried if the market weren’t worried about these sorts of things. There are so many variables in play that no one can confidently predict how things will evolve. My main guidepost is an intuitive trust in the resilience of the US economy, the resourcefulness of America’s entrepreneurs, and the desire of the average person to work hard and enjoy life. 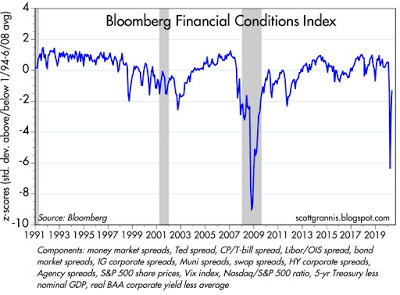 Chart #5 shows an index of key financial market indicators, compiled daily by Bloomberg. Here again we see a sharp rebound/improvement. This is extremely important, since healthy financial markets are essential to an eventual economic recovery. We’re not out of the woods yet, but we have without question pulled back from the edge of the abyss that was looming in late March. 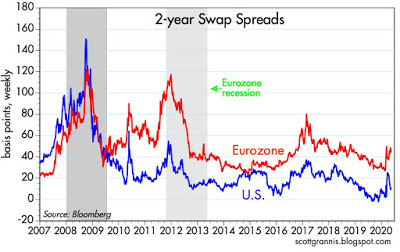 Chart #6 shows one of the indicators included in Chart #5, 2-yr swap spreads. I always keep tabs on this critical, leading indicator of financial market health which has frequently anticipated changes in economic activity. Swap spreads in the US are exactly where we would like to see them, while similar spreads in Europe are somewhat elevated, but not dangerously so. The disparity simply highlights the fact that the US economy is more dynamic and generally healthier than the economies of Europe.
Chart #7 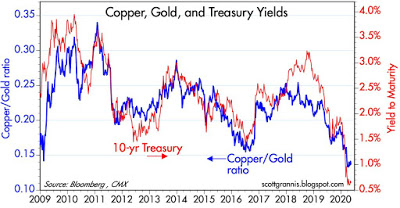 Chart #7 compares the level of 10-yr Treasury yields (red) with the ratio of copper to gold prices (blue). Both of these indicators have shown a tendency to respond to changes in the global economic outlook. Both are still distressingly low, unfortunately, but neither one has deteriorated further since late March. 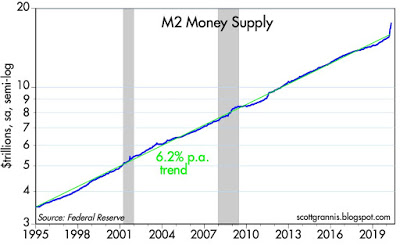 Chart #8 shows the level of the M2 measure of the US money supply. It’s plotted using a semi-log scale on the y axis. Note how for the past 25 years M2 has risen at a fairly steady 6.2% annualized pace. Until recently, that is, when the Federal Reserve pulled out all the stops in an attempt to satisfy the world’s sudden and gargantuan demand for money, money equivalents, and safe, liquid assets. 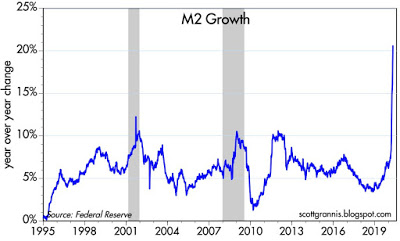 Chart #9 shows the year over year growth of M2. The recent surge, which began in mid-March, is without precedent in US monetary history. 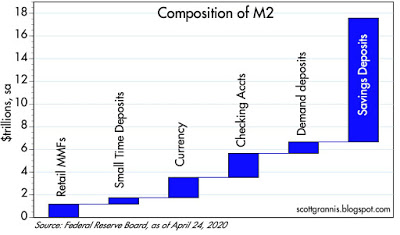 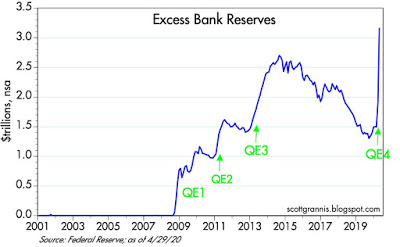 Chart #10 shows the composition of M2. Bank savings deposits account of over 60% of M2, and they have increased by $930 billion since mid-March. This is strong evidence that the demand for safe money has soared as a result of the Covid crisis. Savings deposits pay little or no interest, so people hold them only if they value their safety and liquidity far more than their yield. Demand deposits and checking accounts, close cousins to savings accounts, have increased over $800 billion. Together, the increase in these three components account for almost all of the $1.9 trillion increase in M2 since mid-March. The Fed facilitated this increase by purchasing notes and bonds in exchange for bank reserves (see Chart #11, which is equivalent to transmogrifying notes and bonds into T-bill substitutes. (I’ve explained this process numerous times in the past.) But this is not the same as “printing money.”

What the Fed has done was absolutely essential, since the Covid crisis and the sudden plunge in economic activity created an explosive demand for liquid, safe assets. As long as this demand persists, the huge expansion of the M2 money supply will not be inflationary. Indeed, recent inflation statistics suggests that prices of late have been falling.
Inflation will pose a threat only if the Fed fails to withdraw its liquidity injections when and if the world’s demand for safe, liquid assets begins to subside. For now, that is a tale for future, not for today.

UPDATE (May 22): Here’s an updated version of the TSA Throughput data (Chart #3 above). On a 7-day moving average basis, TSA screening activity is up 150% compared to the low of April 17th. From this we can infer a significant recovery in air passenger traffic in the past 5 weeks. 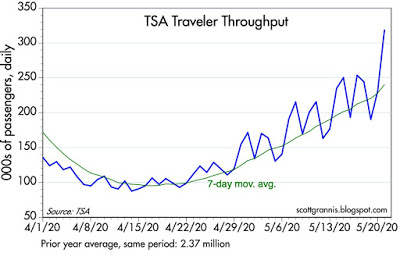