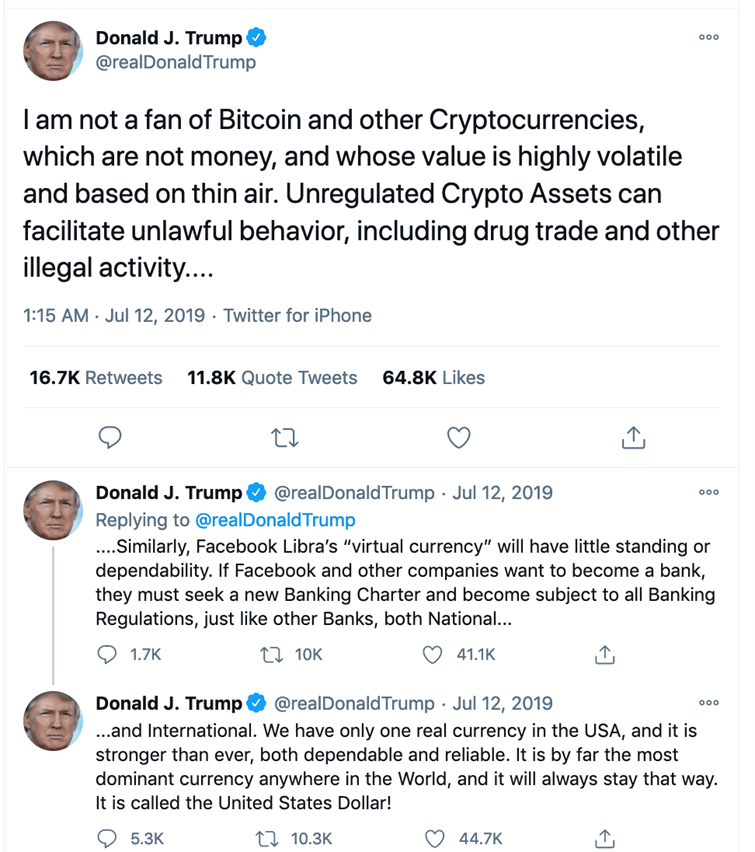 While Biden was pulling ahead in the elections, bitcoin’s price was climbing, potentially showing its contentment with the new state of affairs. Now that Joe Biden is about to take his place as President of the United States in January, bitcoin’s price has reached its all-time high. Meanwhile, bitcoin fans may well be anticipating that the White House will have a more friendly approach towards cryptocurrencies than Donald Trump did. That wouldn’t be hard, though.

Trump’s stance towards bitcoin was well known. He despised digital currencies and made it clear with one of his longer tweets:

“I am not a fan of bitcoin and other Cryptocurrencies, which are not money, and whose value is highly volatile and based on thin air. Unregulated Crypto Assets can facilitate unlawful behavior, including drug trade and other illegal activity…Similarly, Facebook (FB) Libra’s ‘virtual currency’ will have little standing or dependability. If Facebook and other companies want to become a bank, they must seek a new Banking Charter and become subject to all Banking Regulations, just like other Banks, both National…”

He also appointed other well-known crypto cynics on to his staff, including Treasury Secretary Steven Mnuchin, who said that Facebook Libra is ‘a national security issue.’

So How About Biden?

Is Biden good for the business of bitcoin? Kristin Smith, executive director of the Blockchain Association, a trade group of industry leaders ‘advocating for the innovation and collaboration to support the industry,’ seems to think so.

Biden has already appointed Gary Gensler, ex Goldman Sachs banker and former chairman of the CFTC, to lead the financial policy transition team. He teaches courses on Blockchain, and cryptocurrencies at the MIT Sloan School of Management. He is outspoken about his views on the matter, in particular about his “Blockchain duck test,” which helps him to determine whether a token is considered a security. In this way, he has determined that XRP and ether should both be regulated as securities.

Biden appointing Gensler “is a good sign,” according to Smith, “because he is very familiar with crypto and blockchain and hopefully can put the right team of regulators together that will be more willing to work together to advance policies.”

Other members of Biden’s policy team are those who follow crypto and Blockchain-related issues closely, including a gaggle of university professors who have authored papers on Blockchain and cryptocurrencies.

“I think what we see with a Biden administration is an opportunity to get some fresh faces into the key regulatory agencies that might be more willing than some of the other regulators that we have today to move forward on policies that would be good for crypto,” Smith explained.

An article on JoeBiden.com seems to also point in the direction of a digital future, with it noting, “Joe Biden will mobilize the talent, grit, and innovation of the American people and the full power of the federal government to bolster American industrial and technological strength and ensure the future is ‘made in all of America’ by all of America’s workers.”

Bitcoin as an Inflation Hedge

Meanwhile, the idea of bitcoin as a potential inflation hedge has found many new supporters among financial powerhouses and private investors in the last year. JPMorgan (JPM) even believes it may destabilize the use of gold as the ultimate safe-haven asset.

They went on to say, “If this medium to longer term thesis proves right, the price of gold would suffer from a structural flow headwind over the coming years.”

Currently, JPM has a Hold analyst consensus based on 3 Buys, 7 Holds and 1 Sell. At $120.90, the average price target implies shares are fully priced at current levels. (See JPM stock analysis on TipRanks)

Furthermore, PayPal’s (PYPL) recent announcement that it would give its 300 millions users the go-ahead to buy and spend bitcoin and other altcoins from its platform will also go a long way to boost usability and the reputation of the digital currencies.

Disclaimer: The opinions expressed in this article are solely those of the featured experts. The content is intended to be used for informational purposes only. It is very important to do your own analysis before making any investment.

The post Is Biden Good For Bitcoin? appeared first on TipRanks Financial Blog.