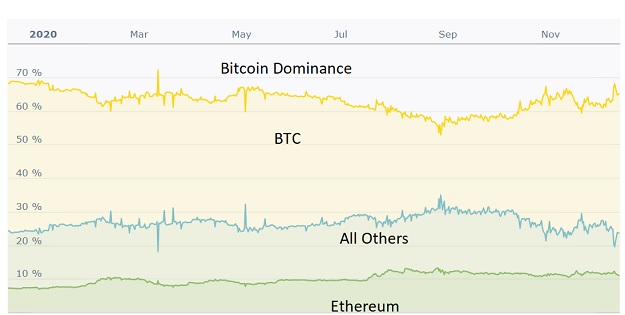 Is Bitcoin Strangling The Other Cryptocurrencies?

Authored by John Rubino via DollarCollapse.com,

Bitcoin had a helluva week.

And many of its fans see its recent spike as just the beginning of a run that converts it from cult favorite to global reserve currency.

That’s an exciting prospect for a lot of reasons. But it’s not yet a done deal.

One of the many concerns that non-HODLers have about bitcoin is that its algorithmically-constrained supply might be a kind of mirage, because other cryptocurrencies with similar characteristics and utility can be created in infinite numbers.

From a trader’s perspective, here’s what that means: If bitcoin keeps rising relative to, say, ethereum and litecoin, it creates an arbitrage in which investors sell bitcoin and reinvest their profits in much-cheaper but otherwise similar – and therefore equally attractive as a store of value – coins. So bitcoin’s price falls (or at least rises more slowly) while ethereum and litecoin gain ground. The crypto universe diversifies and expands, partially at bitcoin’s expense. And bitcoin, while still successful, misses its chance to conquer the global monetary system.

The other day I mentioned this concern to a very smart, highly committed bitcoin fan, and his response (I’m paraphrasing a bit) was:

“Those other coins are trash. Bitcoin is draining all the air out of the crypto space. The others will die and bitcoin will absorb their market cap, along with most of the capital now in gold and the dollar, on its way to a price of $1 million per coin.”

That’s … compelling, considering that you hardly ever hear about those other coins anymore.

One way to check this, of course, is to see what the other coins are doing. If they’re falling as bitcoin rises, then yes, this might indeed be a one-horse race and those comparisons of bitcoin’s tiny-by-design supply to the number of US dollars, ounces of gold, etc., that yield insanely high bitcoin prices look more valid. If, on the other hand, smaller-cap cryptos are taking wing along with bitcoin, then the jury is still out on whether bitcoin’s “supply” is limited to its own ledger or has to include the rest of the crypto space. Which makes its supply theoretically unlimited just like any crappy fiat currency. So let’s go to the charts:

Bitcoin’s dominance of the crypto space has fluctuated in the past year, falling from a massive 70% to the mid-50s and then rising back to pretty much where it started. The verdict: It’s definitely the big player in this space.

But is bitcoin’s recent gain in market share due to the inevitable death of all those no-name/no-future coins that came to market during the recent ICO frenzy? Or is it due to defections from the other viable cryptos that might someday challenge bitcoin’s dominance?

If the former, you’d expect some of the other cryptos to be rising in price along with bitcoin. And some of them are. In the past week:

During a week in which bitcoin had an epic run, the other well-known cryptos did okay. The oxygen may have been sucked out of the no-names with market caps approximating zero, but ethereum, litecoin and bitcoin cash all caught a bid.

These charts actually paint a picture that resembles precious metals mining. Bitcoin is a Barrick or Newmont that just had a really good year, while the lesser cryptos look like mid-tier or junior miners being swept along in the sector whale’s wake.

Which means the crypto ecosystem might be evolving into a normal market, with big and small players and a common-sense dynamic in which a big player’s success sends money flowing down the food chain in search of juicier percentage gains.

With one difference: The supply of viable gold miners is constrained by geology. There’s just so much gold out there, and most of it has already been found. But the number of cryptos with algorithmically-constrained supplies is potentially infinite. And as money flows into that space, the incentive to create more bitcoin clones – and to sell bitcoin itself to buy those potential hundred-baggers – rises.

Put yet another way, bitcoin’s first-mover advantage is real, but the constraints on its dominance imposed by the other viable cryptos seem real too. Very few sectors are swallowed up by a single entity, and it’s not yet clear that cryptos are an exception to that rule.