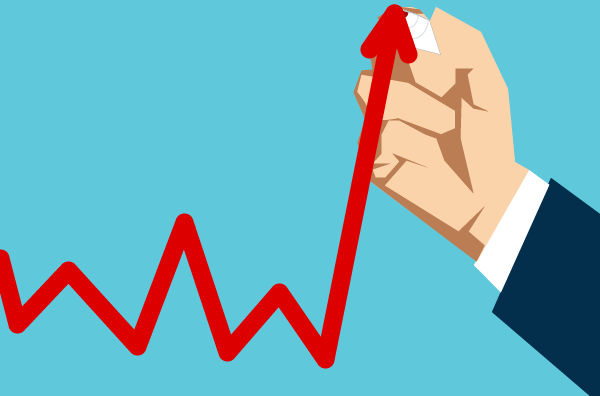 The Federal Reserve just tweaked how it thinks about inflation, and this could have a huge impact on gold and gold mining stocks.

Speaking at Jackson Hole last week, Fed Chair Jerome Powell unveiled an adjustment in U.S. monetary policy that would allow inflation to average 2 percent over a period of time. The implication is that the Fed would let increases in consumer prices overshoot the 2 percent target rate, which the U.S. has rarely touched since 2012 (if we’re going by the headline consumer price index (CPI), which I’ll talk more about below).

To support this reframing of inflation, Powell says interest rates are likely to remain at near zero for some time longer, possibly for another five years.

This policy change could be constructive for gold prices and, consequently, gold producers. This is something I’ve written and spoken about many times before. According to the World Gold Council (WGC), in years when the rate of annual inflation was greater than 3 percent, the price of gold increased 15 percent on average in nominal terms. That’s 10 percentage points higher than the increase that gold prices saw on average in years when inflation was 3 percent or lower. 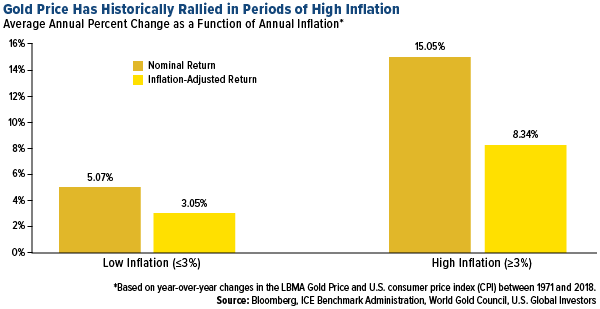 As of Friday morning, spot gold was trading near $1,970 an ounce, down about $1,000 from its all-time high. There could be even greater upside potential if inflation is allowed to expand at a higher rate.

But Are We Even Measuring Inflation Accurately?

Besides signaling possible gains in the price of gold, Powell’s speech raises the question yet again if we’re even measuring inflation accurately in the U.S. As you may be aware, the official CPI is controversial among some investors, academics and economists for a number of reasons. Many people believe that it doesn’t reflect the real changes in prices they’re seeing every day.

For the month of July, for instance, the Bureau of Labor Statistics (BLS) reported that prices for all urban consumers rose only 1 percent year-over-year. Even when we remove core items like food and energy, the increase was a paltry 1.6 percent.

Really? Everything, it seems, is up right now. Stock indices are at record highs. With bond yields at record lows, even before inflation takes its cut, investors are chasing dividend-paying stocks. Gas prices have creeped up to pre-pandemic highs. Nearly every metropolitan area (96 percent) in the U.S. saw an annual increase in home prices in the second quarter, according to the National Association of Realtors (NAR), with the median price climbing 4.2 percent to $291,300.

Here in San Antonio, where the cost of living is typically lower than the national average, median home prices rose 9 percent in July to $260,700. The average price exceeded $300,000 in July, up 10 percent from the same month in 2019.

And look at lumber prices. From the start of the year, the wood has soared 190 percent as lumber demand has surged on an increase in home renovations during coronavirus lockdowns and supply was constrained by closed mills. On Friday, lumber hit a new record high of $916.30 per board foot, almost three times higher than the 10-year average of $338. This has helped support share prices of home improvement retailers like Home Depot, up 33 percent year-to-date, and Lowe’s, up 40 percent. 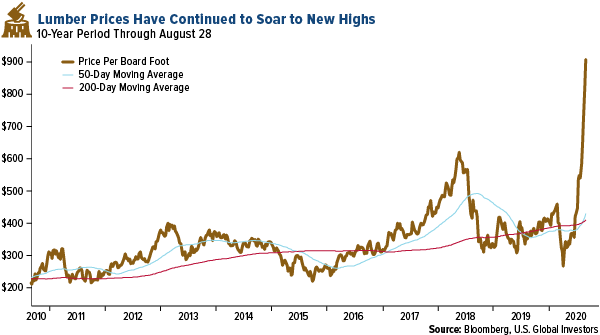 So is there a more accurate gauge of inflation than the CPI? I’m a fan of the site Shadow Government Statistics, or ShadowStats, which provides, among other things, alternate inflation data that uses the 1980 CPI methodology. For what it’s worth, if we use this definition of inflation, consumer prices actually rose 8.6 percent in July, not 1 percent, a not insignificant difference of 760 basis points. 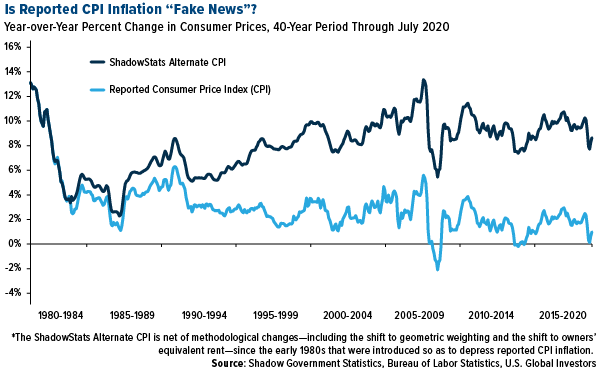 Want to learn more about the relationship between inflation and gold? Watch the video below, and be sure to like it and subscribe to our channel!

I don’t think it’s a coincidence that institutional investors are starting to add gold to their portfolios at this time. Last week, we learned that the $16 billion Ohio Police & Fire Fund will be taking a 5 percent position in the yellow metal as a hedge against inflation.

If you recall, Texas became the first state in the U.S. to have its own gold depository when it opened the Texas Bullion Depository two years ago. At the time, I said that it might encourage other states to follow suit, and I’m pleased to see Ohio money managers realize that a 5 percent to 10 percent allocation to the precious metal is wise and prudent.

Earlier in the month I shared with you that manufacturing activity is improving around the world, as measured by the purchasing manager’s index (PMI). Factories in both China and the U.S., representing 40 percent of global economic output, are currently in expansion mode, with the official China PMI up for the past five straight months. Later this week we’ll see the PMI numbers for August, and I’m expecting them to have ticked up even higher.

This type of activity is inflationary. New orders means greater demand for metals, energy and other commodities and raw materials, and this has the effect of pushing prices up.

This is why we’ve seen the copper price rise steadily off its pandemic low. Sometimes referred to as “Doctor Copper” for its role as an economic bellwether, the red metal is universally used in electrical wiring, construction, industrial machinery and more.

It’s not just asset prices that drive up inflation, of course. There’s also wage growth, and in many economies that produce much of the world’s goods, especially those in Asia, wages are on the rise.

Of the countries featured above, China remains the most expensive to manufacture goods in based on a monthly base salary of $493, but according to CLSA, Indonesia and Thailand both saw relatively high wage increases in 2019. You can see why many companies, including Apple, Samsung, Nintendo and GoPro, are moving out of China and relocating to Vietnam and other lower-wage economies.

Before you go, be sure to take our poll below!

The dividend yield is a financial ratio that shows how much a company pays out in dividends each year relative to its stock price. A basis point is one hundredth of one percent, used chiefly in expressing differences of interest rates.

Holdings may change daily. Holdings are reported as of the most recent quarter-end. The following securities mentioned in the article were held by one or more accounts managed by U.S. Global Investors as of (06/30/2020): The Home Depot Inc.