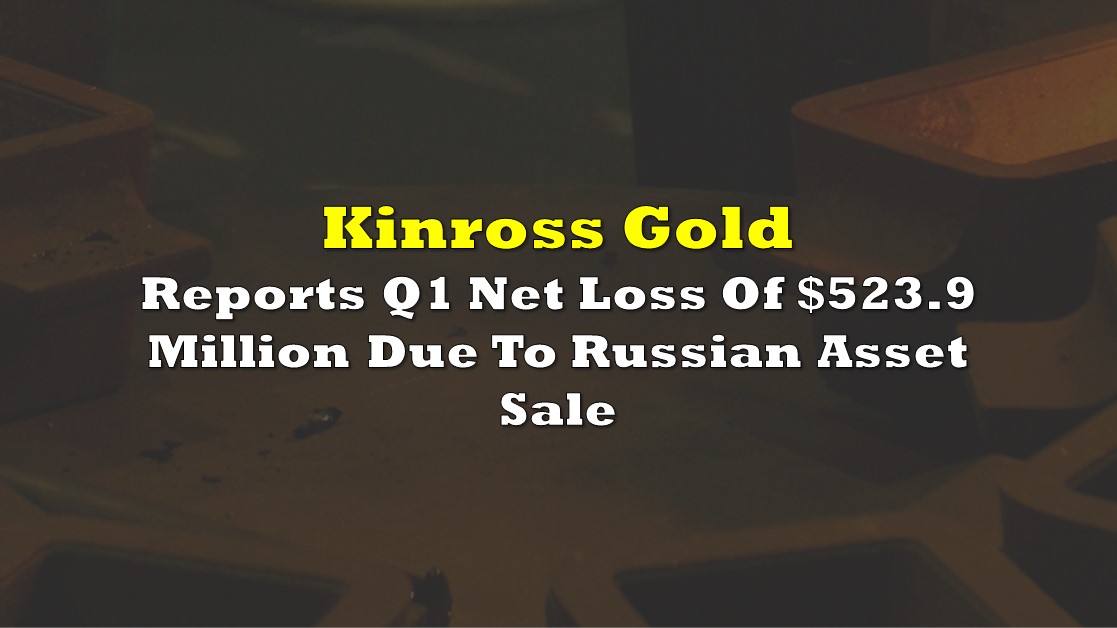 Kinross Gold (TSX: K) yesterday evening announced its first quarter 2021 financial results. The results mark the first quarter in which the firm has not included the topline revenue from its former Russian operations, a result of the assets being classified as discontinued as of the quarter end.

Revenue for the quarter amounted to $768.0 million, a decline of 12.7% over the firms fourth quarter sales of $879.5 million. Production for the quarter, including the firms Russian assets, amounted to 509,241 gold equivalent ounces, of which 495,475 was sold. Comparatively, gold equivalent ounces from continuing operations, which excludes the Russian assets but includes the recently sold Chirano operation, saw 413,350 ounces produced and 409,538 ounces sold.

Net earnings from continuing operations amounted to $82.3 million for the quarter, versus a loss of $2.7 million in the fourth quarter. Adjusted net earnings meanwhile hit $70.6 million. Net cash flow meanwhile amounted to $261.0 million, while free cash flow was negative $1.1 million.

Once discontinued operations were factored in however, which amounted to a $606.1 million loss, the company posted a net loss for the quarter of $523.9 million, or a loss of $0.41 per share.

On a per ounce level, the average realized gold price from continued operations hit $1,875 during the quarter, while consolidated production cost of sales hit $1,003 per ounce. All in sustaining costs meanwhile hit $1,473 on a per equivalent ounce basis.

In terms of its balance sheet, the company saw its cash and cash equivalents position decline from $531.5 million to $454.2 million. Total current assets overall sits at $2,189.6 million, of which $1,044.4 million is attributable to inventories and $498.4 million is classified as assets held for sale. Accounts payable and accrued liabilities meanwhile sits at $441.8 million, while total current liabilities is currently pegged at $661.1 million.

Guidance meanwhile on a pro-forma basis is maintained for the full fiscal year at roughly 2.15 million gold ounce equivalents, plus or minus 5%. 2023 guidance meanwhile has been adjusted to 2.3 million ounces, while the company expects to produce 2.1 million ounces in 2024. On a per ounce basis, the company estimates product cost of sales per gold ounce equivalent to hit $830, while all in sustaining costs are guided to be roughly $1,150 per ounce.

With respect to the firms former Russian operations, the company notably recorded an impairment of $671.0 million related to the sale of the assets. The operation notably had net cash flow of $76.3 million for the quarter, while generating $153.5 million in revenues for the company.