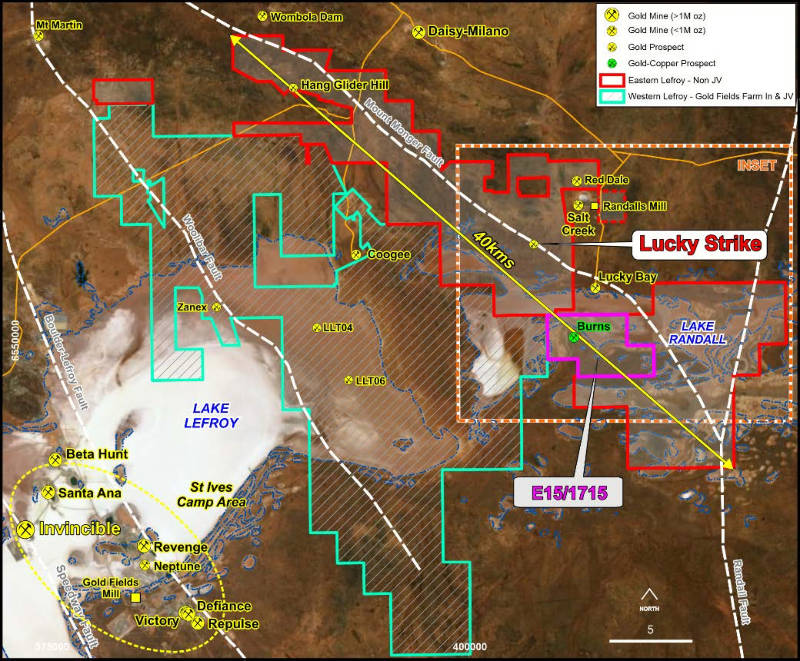 Special Report: Lefroy Exploration (ASX:LEX) has expanded the footprint of its namesake project near Kalgoorlie with the grant of a tenement over the Burns gold-copper prospect.

The 20sqkm tenement also contains the extension of the banded iron formation that hosts the Lucky Strike gold trend and secures a prime land position that now covers 40km of the Mt Monger fault.

Burns was discovered in 2011 and subsequent drilling intersected broad zones of gold and copper mineralisation.

The Burns system lies on the eastern margin of a large interpreted multiphase felsic intrusion, most of which is held by the company through its Eastern Lefroy tenements or the West Lefroy joint venture tenements with Gold Fields.

This intrusion has only been partially explored by shallow aircore drilling and is considered a priority exploration target for an intrusion related gold system such as the Gruyere, Mandilla Well and Hemi discoveries, and/or a porphyry gold-copper style of mineralisation.

“We are very pleased to have the Burns tenement granted within 9 months, to seal a missing gap at Eastern Lefroy that now covers 40km of prospective ground,” managing director Wade Johnson said.

“The Burns intrusion, with its unique geophysical signature, large footprint and associated gold and copper mineralisation makes it a very attractive target in the WA goldfields at a time of robust gold and copper prices.”

Lefroy has already integrated data from all previous exploration by Octagonal, WMC, Newmont and BHP into its drilling and geophysical database.

The company has started preparations to conduct a heritage survey at Burns in the December 2020 quarter ahead of a drilling campaign.

Drill planning is in its early stages and will include validation reverse circulation and diamond drilling at the prospect to facilitate a resource estimate as well as deep core holes to assess the mineralised potential of the Burns intrusion.


This article was developed in collaboration with Lefroy Exploration, a Stockhead advertiser at the time of publishing.