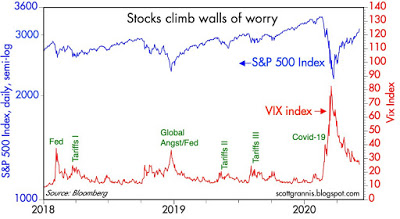 Economic fundamentals are definitely on the mend. It’s no wonder stocks are rising nearly everywhere: the virus is burning out and lockdowns are ending. People are anxious to get out and go back to work, and it shows. Numerous high-frequency indicators show sharp turnarounds, and the stock market appears to be pricing in a substantial recovery. There’s a whiff of a market “meltup” in the air, in the sense that those who cashed out when the cannons were blasting are now worried about whether and when to get back in. But it’s not at all clear that prices are overbought or that investors are over-confident.
Chart #1

As Chart #1 shows, equity prices have recovered a substantial portion of what they lost in March. The Vix Index (fear) is still elevated however, so it’s tough to say that investors are throwing caution to the wind, especially given the still-low level of 10yr Treasury yields (0.75% as of today). 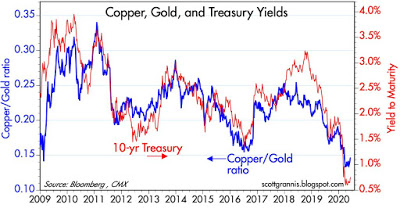 Both the 10yr Treasury yield and the ratio of copper to gold prices have turned up a bit of late (see Chart #2), and this is a good sign that global economic conditions are beginning to improve. Still, there is lots and lots of room for further improvement. 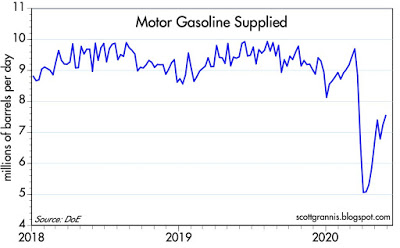 As Chart #3 suggests, consumption of motor gasoline has rebounded significantly. This is a good measure of the extent to which consumers are still sheltering at home and working at home. 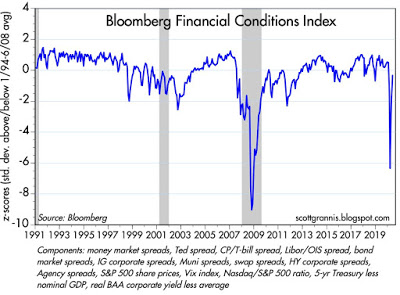 Thanks to aggressive Fed action to supply much-needed liquidity to the banking system, over financial conditions have improved dramatically, as Chart #4 shows. We’ve never seen such a rapid rate of financial healing after a recession. 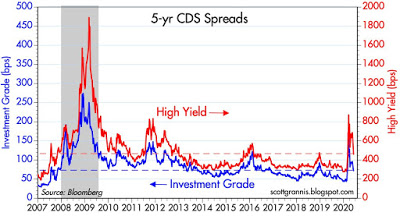 Chart #5 shows that credit spreads have narrowed significantly and rather rapidly. When liquidity is abundant and the economy is expanding, the risks to corporate profits decline. Spreads are still somewhat elevated, but they have retreated meaningfully from the edge of the abyss. 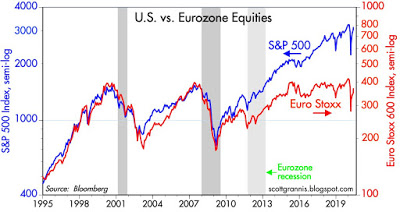 As Chart #6 shows, Eurozone equities have also rallied significantly. However, US stocks continue to be the strongest. The S&P 500 index has outpaced its Eurozone counterpart by roughly 100% over the past decade. 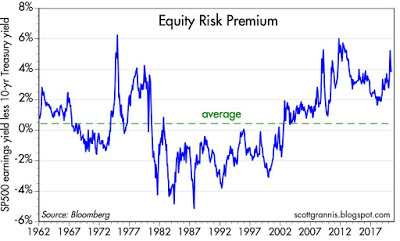 Earnings are very likely to be weak for the remainder of the year, but even discounting that, the equity risk premium is at least 3%. Investors are still willing to give up a substantial amount of yield in exchange for the safety of Treasuries. Again, no sign here that caution has been thrown to the wind. 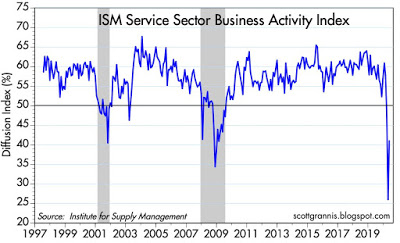 The business activity subset of the ISM service sector surveys (Chart #8) shows a significant rebound in the month of May. This should move higher still with this month’s survey. 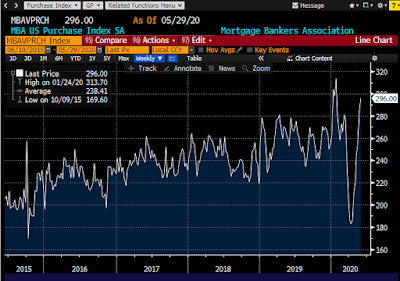 Chart #9 shows an index of new mortgage purchases (mortgages taken out for an initial home purchase, as contrasted to mortgage refinancings). Home sales must be doing quite well these days, despite the shutdowns. 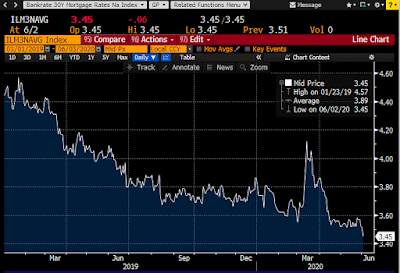 Chart #10 shows the national average of 30-yr fixed rate mortgage rates. Mortgage rates for conventional mortgages have never been lower in the history of the US. However, they do have room to decline further, since the spread between this index and the 10-yr Treasury is still unusually wide. 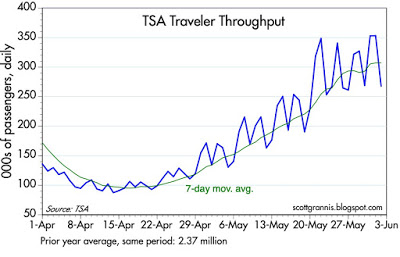 On a 7-day moving average basis, TSA screeners as of yesterday had processed three times the number they processed just two months ago. Still a long way to go to get back to normal, but there is a noticeable increase in the demand for air travel.

I still worry about a potential surplus of money. Monetary expansion has been off the charts in the past two months, and that is fine as long as the market wants precautionary and safe haven money balances. But as confidence returns the demand for money will inevitably decline, and it will be critical for the Fed to respond to this by raising short-term interest rates. Whether this will play out soon or later this year is an open question.

I can point to some evidence of declining money demand which is showing up as rising prices for stocks, commodities, and risk assets in general. But as yet it’s not clear that prices for any of these things is irrational, as might prove the case when and if the Fed is slow to offset declining money demand with higher interest rates. But I am keeping a sharp eye out for this.

In the meantime, the chance of an unexpected rise in inflation has probably never been so likely, given that hardly anyone is concerned about this at a time when the fundamentals could definitely support higher inflation. That increases the attractiveness of debt in general, and of real estate and other hard assets.