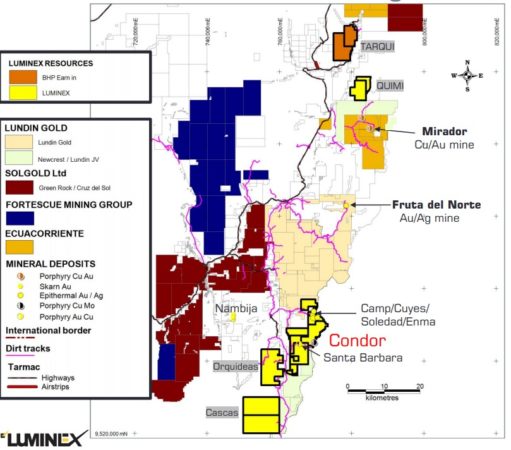 Luminex Resources (LR.V) released the results of additional metallurgical test work on the
Camp zone of its Condor project in Ecuador. According to the updated test
results, roughly 34% of the gold and 7% of the silver can be recovered through
a simple gravity recovery circuit while the majority of the gold and silver can
subsequently be recovered in the CIL plant. A third stage contains a flotation
circuit which squeezes out more silver from the rock and also recovers most of
the base metals at the Camp zone (although we would hope more work can be done
on increasing the base metal recoveries as that could be the key to further
improve future economics on the project.

The test result was based on a master
composite with an average grade of 4.3 g/t gold, 29.3 g/t silver 0.18% lead and
0.96% zinc so it’s clear that although there may be some additional base metals
to be recovered, the full focus should indeed be on the precious metals part as
that’s where the Camp zone’s money will be made.

Luminex recently also announced the results of five holes drilled at the Soledad Baja zone where the company continued to intersect gold mineralization.

Disclosure: The author has no position in Luminex Resources.