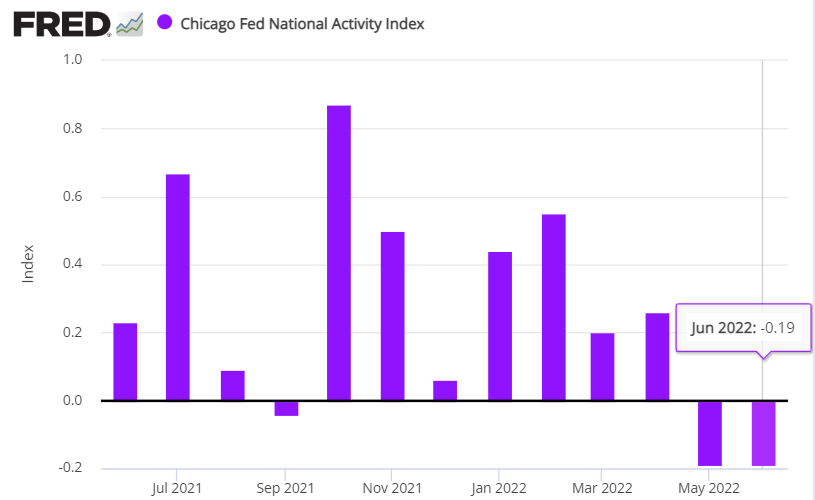 * Tensions rise between US and China over planned Taiwan trip by Pelosi
* Russia set to further cut gas deliveries to Germany
* Is the US recession? Deciding yea or nay is tricky at the moment
* Economist Nouriel Roubini predicts deep recession due partly to high debt loads
* Supply of negative-yielding debt has fallen sharply since late-2020
* US growth running below historical average for second month in June:

The US economy may be on brink of recession and the Federal Reserve could push it over the edge. “The more the Fed is set to deliver on further significant hikes and slow the economy sharply, the more likely it is that the price of inflation control is recession,” Goldman Sachs economists wrote in a research note. “The persistence of CPI inflation surprises clearly increases those risks, because it worsens the trade-off between growth and inflation, so it makes sense that the market has worried more about a Fed-induced recession on the back of higher core inflation prints.”

The outlook for gold may soon start to improve, predicts a fund manager. The metal has fallen since March, but “The Federal Reserve’s hawkish posturing is cratering the economy,” says John Hathaway, senior portfolio manager of Sprott Hathaway Special Situations Strategy. “Any sign that the Federal Reserve is relenting on rate hikes will be good for gold. By the end of summer, inflation could moderate from 9% and the Fed will declare victory. But moderation is not a victory, inflation will still remain high and a problem for consumers.”

Walmart is cutting prices on clothing, a possible sign of easing inflation. “The increasing levels of food and fuel inflation are affecting how customers spend,” reports Walmart CEO Doug McMillon. “Apparel in Walmart US is requiring more markdown dollars.”

Declining capacity for US gasoline refining suggests high prices will persist. “We are going to be operating a shrunken, old and in-need-of-repair refining system a lot harder,” says Bob McNally, head of consulting firm Rapidan Energy and a former senior director for international energy on the National Security Council. “Future presidents and administrations are going to be absolutely bedeviled by high gasoline prices.”