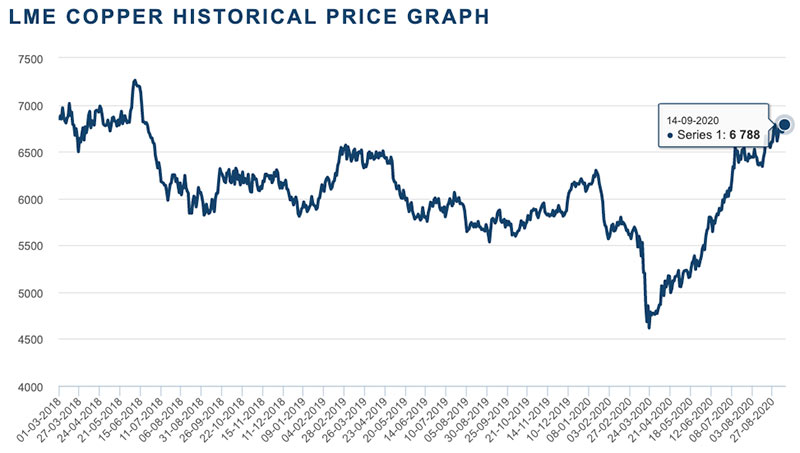 The copper price is at its highest point since June 2018, driven by China’s post-COVID stimulus and a more general recovery in global economic activity.

Like iron ore – which just hit six-year highs – copper prices can be used to measure market sentiment and the perceived health of the global economy.

But we also need a lot more copper going forward. These explorers (and many others) are stepping up to the plate.

Redbank’s shares resumed trading on the ASX this morning for the first time in over 12 months … and immediately shot up almost 200 per cent.

“Redbank is well positioned to take full advantage of the strengthening copper cycle, driven by increasing global demand and a lack of copper development projects, so we are understandably excited by the future prospects of the company,” says Wayne McGrath, chairman of major Redbank shareholder Wyllie Group.

“Ultimately, this resource outcome – 30 per cent more copper, a near doubling of grade and greater confidence levels – should have a positive impact on the mining and processing costs,” KGL chairman Denis Wood says.

“KGL is approaching the project financing and development stage of Jervois at a time of strengthening copper and silver prices and positive medium and long-term market outlooks.”

A pre-feasibility study on a development at Jervois is expected to be ready for release during the fourth quarter of 2020.

Who says coal is dead?  Fresh listing Montem Resources (ASX:MR1) hit the boards today and is already up +20 per cent in early trade.

It successfully raised $8 million at $0.25 a share in its IPO after an initial attempt to join the bourse in 2018 failed.

In response to an ASX price query yesterday, Ecograf pointed the finger at “improved sentiment for battery mineral markets” and articles in The Age and Sydney Morning Herald which included quotes from managing director Andrew Spinks.

Also up on no news is advanced US lithium play Jindalee Resources (ASX:JRL).