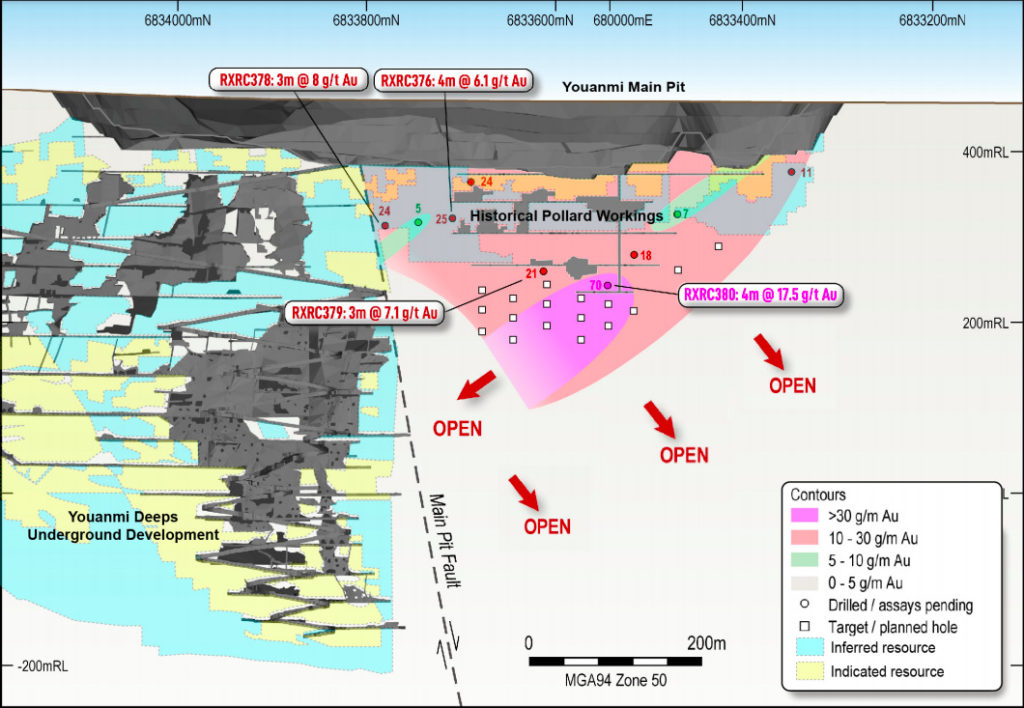 Rox has expanded the mineralised footprint of the Junction prospect at its Youanmi project with drilling returning high-grade gold hits.

Assays from a further six holes drilled at Junction were received with all of them intersecting gold mineralisation including top hits of 4m grading 17.5 grams per tonne (g/t) gold from a depth of 259m and 4m at 6.1g/t gold from 170m.

Rox Resources (ASX:RXL) added the results have extended the known area of high-grade mineralisation at Junction by 150m below the historically mined Youanmi main pit.

The results from Junction come just days after the company recorded high-grade gold hits at the Link prospect just 1km along strike to the north.

Assays are pending for a further nine holes with reverse circulation drilling ongoing to follow-up on the successful results to date at the Link, Junction and Grace prospects.

The Junction area is an interpreted convergence zone at depth between the historically mined Main Lode and the recently discovered Grace Lode.

It is situated under the southern extent of the Youanmi Main Pit in the vicinity of the historically mined, high-grade underground Pollard Lode that was recorded to have produced 260,000oz of gold at an average grade of 15g/t.

Junction is located within the Pollard mineralised envelope and represents a high priority target area that is largely unexplored at depth by historical drilling.

Rox plans to drill a further 15 holes to delineate a new mineralised shoot within the Junction structure.

Drilling will also delineate and extend shallow high-grade ore shoots at Grace, Link and Junction with the goal of increasing near-mine mineral resources.

Results from the RC drilling will also aid in refining deeper down plunge targets for drill testing with an extensive upcoming diamond core drilling program.

Further work for this year includes more RC and diamond drilling along with metallurgical, hydrogeological, geotechnical and environmental studies to underpin an updated development plan.

This article was developed in collaboration with Rox Resources, a Stockhead advertiser at the time of publishing.