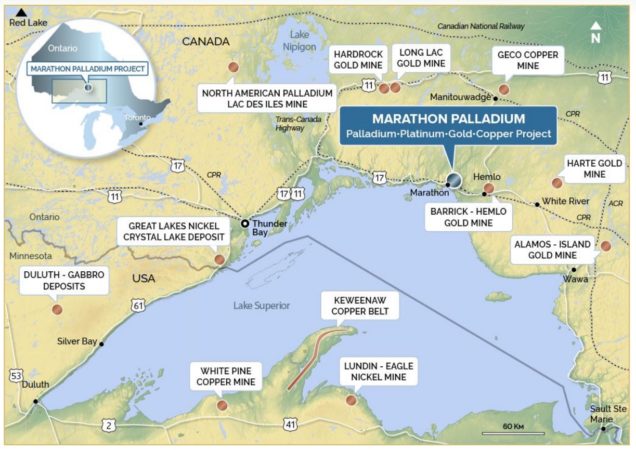 •             Let’s start with your exploration program. A few weeks ago, you announced a new magnetotelluric-based drill target which appears to be the literal extension of the mineralized zone that hosts the current resource at Marathon. Why hasn’t this zone been drilled before? Is this the first ‘real’ indication you got the mineralization may just continue?

The mineralization in our deposits was emplaced by a series of volcanic eruptions about 1.1 billion years ago. By its very nature this means that there had to be a conduit which brought the magma up towards the surface. So we expected that the mineralization would continue down.

However, this was not drilled in the past because it was too deep for an open pit, and too low grade to mine with underground methods.  The reason for our excitement over the MT target is that it is more conductive than the main zone, which could mean a higher concentration of metal. The model, which you can see on the next image (and in our corporate presentation), shows how massive sulphide deposits are formed. Basically, if a natural “trap” exists which will concentrate heavy particles (including PGMs and copper) this could explain the anomaly.

•             At a vertical depth of 650 meters, may we assume the limits of the pit have been reached, and you will look at the drill target as an underground target?

Yes, this would be an underground mining target. The idea would be to add a small amount of high grade mineralization to the mill feed and increase the overall grade. But we have to find that first.

•             The drill program is currently underway, when may we expect the initial assay results? October? What’s the main reason only two holes will be targeting the MT anomaly we just discussed? Is your confidence level in the W horizon drill target higher?

Hard to say when the assays will come, there is a lot of exploration going on and the labs are really busy. We expect the first hole to be finished in a week or so (as we write this on Friday, Aug 28) then several days for logging, cutting, etc, then shipping to the lab. Unfortunately, it is nearly impossible to guess the PGM grades from the drill core so we will have to wait for the lab assays.

The MT target is the probable conduit for the Main Zone which is much thicker than the W Horizon, but covers a smaller horizontal extent. The Main Zone is where most of our copper is which is why we are excited about the MT results. The W Horizon is a narrow but high grade Palladium  zone which is low in copper, The low copper meant the conduit didn’t show up in the geophysics, and so we don’t know exactly where theconduit is, we have to feel our way around (thus more holes).  We are looking for high grade shoots which could be mined underground from a ramp in the bottom of the pit. There are a few of these shoots within the known resource and we are drilling down dip from them. They can add ounces very quickly. Bear in mind that Lac des Illes is making lots of money mining 3 g/t material underground.

•             Your PEA in January indicated an after-tax NPV5% of C$871M using US$1250 palladium. Looking at your sensitivity table, the NPV increases to C$1.54B at $1900 palladium (the current price is $2085/oz). Last week, you announced updated met results which boosted the recovery rates of the main metals. The palladium recovery increased by 4% which means your payable output increases by 56,000 ounces while you will also sell about 30,000 additional ounces of platinum and 10 million additional pounds of copper. At current spot prices, this increases your incoming cash flow by US$170M at virtually no additional cost. We estimate the positive impact of the updated met work to be around C$100-125M, would you agree with this assessment (of course, we understand you cannot give exact numbers as you are bound by  NI43-101 regulation but feel free to point any flaws in this interpretation)? Also, do you think there is additional upside potential to be unlocked from additional met work, or is this ‘it’?

The positive impact range you give is probably reasonable. We can’t really comment any further as I’m sure you can understand. All I can say is that the definitive feasibility study is underway and we are anxious to see how we can improve on the PEA.

Bear in mind that virtually all of the PEA numbers will be adjusted upwards or downwards as we complete engineering, detailed pit design, more exacting process costs, etc. This is standard process and at this stage we would be off side if we tried to give you exact numbers at this stage. The PEA numbers by their very nature are I think +/- 40%.   The met numbers are close to final, but the work on the pilot plant could mean a small adjustment up or down.

•             At the current palladium price and assuming the higher recoveries, the after-tax NPV5% of the Marathon project could be estimated at C$1.8B, or around C$13/share (for a 100% basis, so around C$10.40 assuming you will form a 80/20 JV with Sibanye-Stillwater) while the upcoming drill program could add more tonnes to the resource and mine plan. So, we’ve got to ask why you remain so undervalued? Your current market cap is represents just 0.05 times your attributable NPV at spot prices. Even using your more conservative base case with $1275 palladium, you are trading at less than 0.1 times NPV. What causes this dirt-cheap valuation for a feasibility-stage project with exploration upside?

We are wondering the same thing! We noticed the shares of palladium developers ran up in January, and in March when the Pd price got cut in half, it was like they got kicked in the stomach. Most of them have not recovered. Also, we keep hearing that our project is too good to be true. When we offered Drew Anwyll (ex-Detour Gold) the COO position he did six weeks of due diligence, because he thought it was too good to be true as well. Then he joined us and started buying shares.  Also, we aren’t gold and this is a gold market and also a drill hole market.

We expect that the feasibility study will put this notion to rest and we will be seriously re-rated. In the meantime, any good drill results or additional improvements to the economics will be icing on the cake.

Disclosure: The author has a long position in Generation Mining. Generation is a sponsor of the website.