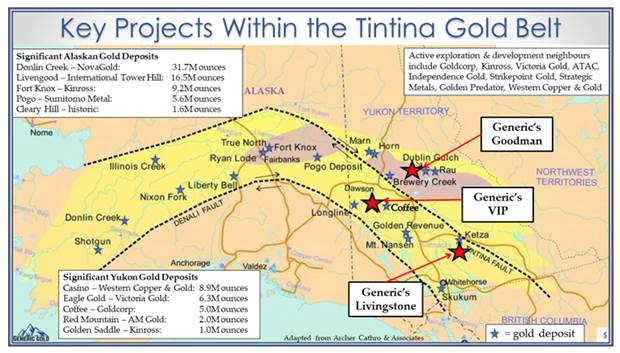 Golden Sky Minerals is advancing its properties in the Yukon in an area that has seen larger miners move in.

Mining in Canada’s Yukon Territory goes all the way back to the 1897 Klondike Gold Rush, so the region has a long history in mining and exploration.

Today, mining is an important part of the Yukon’s economy as it experiences a modern-day gold rush, Golden Sky Minerals Corp. (AUEN:TSX.V; LCKYF:OTC) CEO John Newell told Streetwise Reports. “For years, smaller companies, placer miners ‘working the creeks,’ dredging barges ‘working the rivers,’ prospectors and mining entrepreneurs have walked and staked the ground throughout the Yukon. But now, the majors are discovering what the juniors have long known: This region is largely underexplored, has exceptional geology, and has strong potential for district-size mining operations that can replace the declining reserve profiles that the majors are experiencing.”

Along with mineral potential, “mining companies continue to invest in the Yukon because of the clarity provided at all levels of government, programs, and partnerships with First Nations,” Newell said.

The area is part of the Tintina Gold Belt, a 1,200 km long and 200 km wide arc that extends from the south corner of Alaska into the northern part of British Columbia. “Its central section spanning the Yukon Territory including where it crosses the un-glaciated Dawson Range is underexplored,” Newell explained. “The Tintina Gold Belt production mines and significant exploration and mine development projects demonstrate the geologic potential in the Dawson Range.”

Over 50 million ounces of gold have been discovered in this belt over the last 20 years, Newell said.

The sources of the Yukon’s White Gold District remained uncovered until the discovery of the Golden Saddle (Underworld, Kinross, now White Gold) and Coffee deposits (formerly Kaminak, now Newmont/Goldcorp) in the district. “Many geologists and experts believe there are many more sources,” Newell said. “While exploration for hard rock deposits has been limited in the past, this started to change in the past 10 years, when over 7 million ounces has been discovered in this area. Over time new technology, innovation, and more experience has continually enhanced companies’ abilities to discover new deposits, as well as expand on existing ones, which is encouraging senior miners to take a closer look and invest in the district.”

The Yukon territorial governments, along with the Canadian federal government, have committed CA$360 million to improve roads and infrastructure throughout the Yukon, including the White Gold District, which could drive down capex costs and improve project economics for companies in the area. “Major gold producers are moving heavily into the area. The region offers vast areas of underexplored prime terrane, geopolitical stability, infrastructure that is decent and improving, a mining friendly culture, and new large deposits are being found, examples being Goldcorp’s Coffee project, Victoria Gold‘s Dublin Gulch, and ATAC’s Carlin style target,” Newell explained.

Golden Sky Minerals, a mineral exploration company, has a Yukon focus and is currently advancing three main assets out of the six properties it holds:

All three properties are all 100% owned by Golden Sky and have no underlying royalties or property payments. 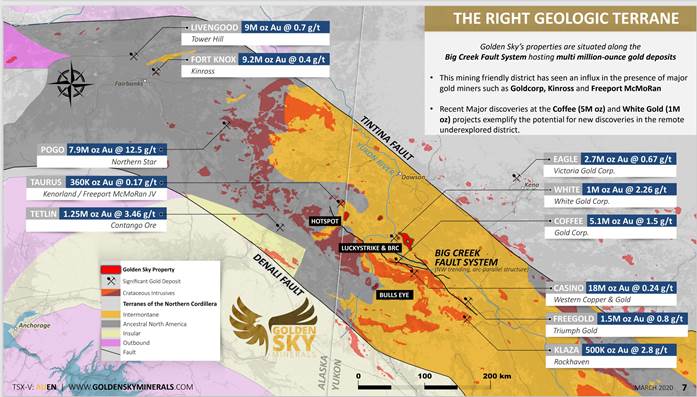 The project, in a previously unrecognized gold sub-district, is contiguous to K2 Gold’s Wels project, Newell explained. “Drilling conducted by K2 at Wels in 2015 and 2017 yielded notable drill intercepts of 0.76 g/t over 97.5m and 2.37 g/t over 28.5m, respectively. During field work in 2017, Golden Sky identified the Gold Crest Zone, a 200m by 250m gold-in-soil anomaly that remains open.”

This year’s phase 1 program involved the collection of 560 soil samples, 50 prospecting grab samples and the completion of a 134-meter-long trench. The majority of exploration, including the trench, was focused on the Gold Crest zone.

The company announced on August 31 that the assays from the discovery trench “returned a value of 0.69 g/t gold (Au) over 78m with significant higher-grade intercepts.”

“On the comparison chart below, two past trenching programs in the region—50 km away—later went on to become major discoveries after drilling. This suggests that Golden Sky along with its neighbors K2 Gold (and its great results) and White Gold could be in a new, previously unrecognized gold district,” Newell noted.

“Visual results from trenching indicate widespread quartz stockwork, silicification, sericite alteration, and pyrite mineralization within the soil geochemical anomaly,” Newell reported. “Reconnaissance soil sampling and prospecting was also completed on unexplored areas of the property. Due to favorable visual results, 30 additional claims were staked to bring the property to a total of 142 claims (2,968 hectares).” 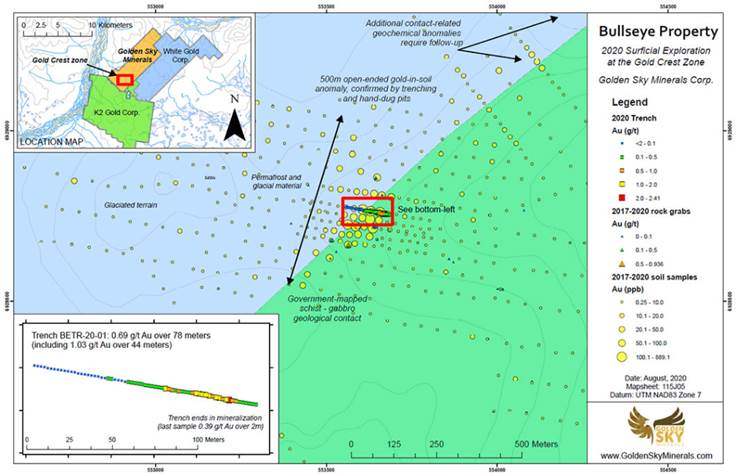 The Hot Spot property is a “newly discovered gold occurrence located in a largely underexplored part of the Yukon,” Newell said. “It is located 25 km south of the Tanacross copper, molybdenum and gold porphyry deposit (360,000 oz Au) in eastern Alaska, right against the Yukon Border.” Tanacross is being explored by a joint venture between Kenorland Minerals and Freeport McMoRan.

Situated along the Big Creek Fault, “Hot Spot hosts a 1.7-kilometer-long mineralized structure with gold-in-soil values up to 4.1 g/t Au and a pathfinder signature indicative of a low-sulphidation epithermal system. A short trenching program in 2018 returned values of 0.42 g/t Au over 44 meters,” Newell said.

Golden Sky Minerals has announced the mobilization of an exploration team to its Hot Spot property. The company noted that the phase 1 program will involve soil sampling to expand the Sure Bet zone, and preparation for a phase 2 inaugural drill program to be conducted September 2020.

The company stated that it will also conduct an exploratory drill program at Hot Spot to test shallow low-sulphidation epithermal gold mineralization. A follow-up drill program will be executed to test the extent of this mineralization, as well as for, potential buried porphyry systems. 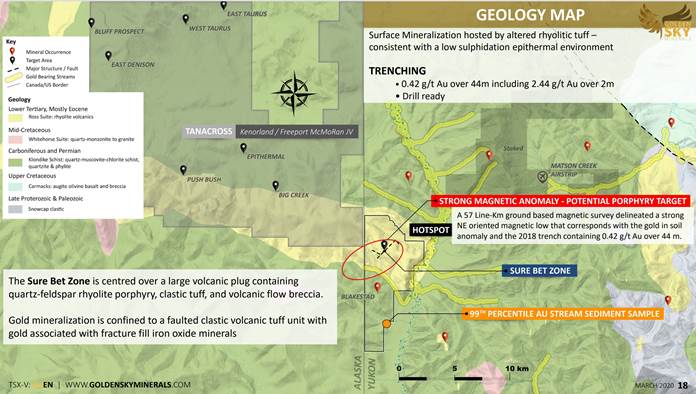 “The Luckystrike property is contiguous with White Gold‘s Golden Saddle property in a mining district that has seen over 7 million ounces of gold discovered since 2007. This area has excellent access by road with Goldcorp’s haul road crossing the property in three locations, as well as two barge landings for river access, a permitted airstrip on the property and a larger well-maintained airstrip in the area,” Newell said.

“The discovery drill hole was drilled in 2017 in the Monte Carlo Zone and returned 5.36 g/t gold over 22meters. Follow-up drilling in 2018 was encouraging and included an intercept of 4.55 g/t gold over 7.6 meters,” Newell said. “Future drilling on the property will focus on the Monte Carlo Zone, which is the only drill-tested zone to date. Strong potential for new discoveries remains on the other zones.” 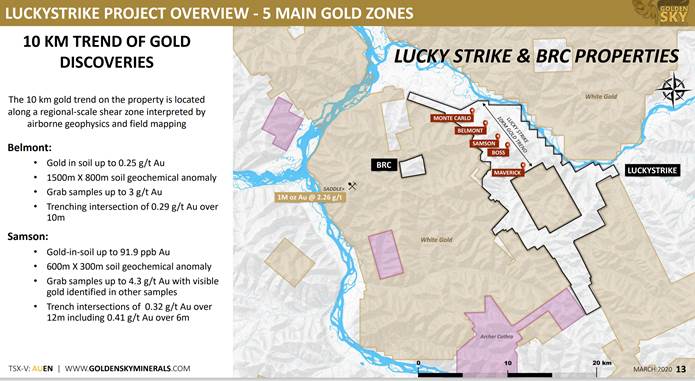 “Soil sampling and trenching has been a prime tool in locating mineralized areas in the unglaciated White Gold District, and results from trenches in the Monte Carlo Zone at Lucky Strike are like those seen in the initial discovery trenches at both Coffee Creek and the Golden Saddle that led to the drilling of those deposits,” Newell explained. 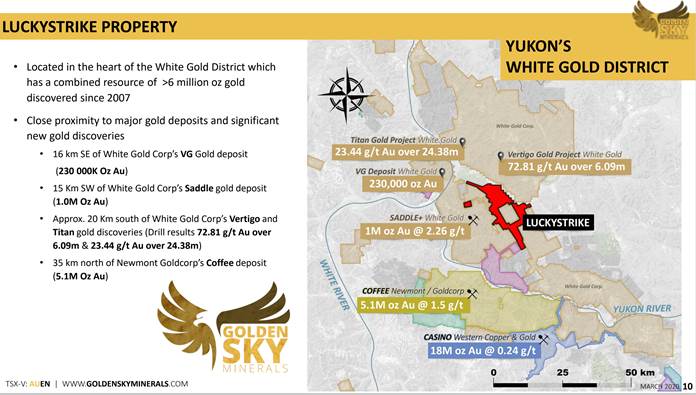 To date, “all eight trenches along the 450m strike length at Monte Carlo have encountered near surface gold mineralization in bedrock and many drill targets remain to be tested,” Newell said. “Monte Carlo has a northwest trending geophysical signature indicating a mineralized contact or structure that has been mapped using IP, ground magnetics and airborne geophysics. This is coincident with gold mineralization seen in the 2016 and 2017 trenches. This anomaly is observed at depth and along strike for 700 meters and remains open.”

John Newell serves as president, CEO and director of Golden Sky. He has 38 years of experience in the investment industry acting as an officer, director, portfolio manager and investment advisor in some of the largest investment firms in Canada including Scotia McLeod, CIBC Wood Gundy and Richardson Greenshields (RBC Dominion Securities) and has raised over $500 million in capital for exploration teams and producers. He is concurrently a portfolio manager at Fieldhouse Capital Management, specializing in precious metals equities.

Rein Turna, a geologist and director, has over 40 years of experience in mineral exploration in Canada. He is a registered professional geologist with the Association of Professional Engineers and Geoscientists of British Columbia since 1993. Turna has held staff and consulting roles with major and medium companies including Placer Dome, Falconbridge Ltd. and Lac Minerals.

“Located in a highly prospective region that is inhabited by majors and boasts of several multi-million-ounce gold deposits, Golden Sky’s upcoming exploration program, as well as the potential acquisition of new properties, present the company with near-term price catalysts,” Newell concluded. “One cautionary note is shares could be thinly traded and subject to large swings in this market, so liquidity may be an issue, given the low share count, currently 9.4 million.”

Technical analyst Clive Maund follows Golden Sky and wrote on CliveMaund.com on August 31, “there is news out this morning that should get it moving in the right direction again, which is that it has trenched 78m of 0.69 g/t Au at its Bull’s Eye property and prepares to drill Hot Spot. . . We therefore stay long and Golden Sky is rated a buy again here.” 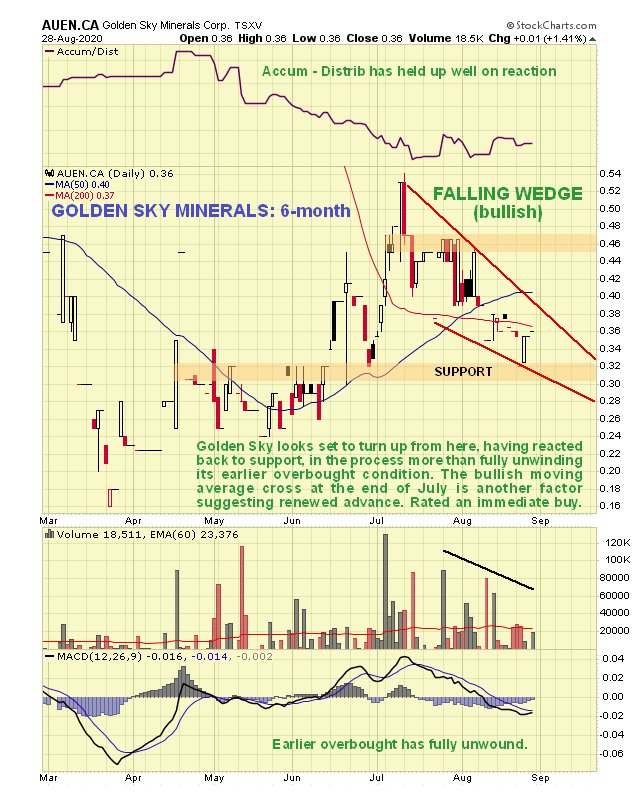 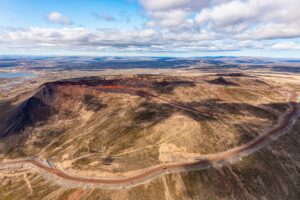 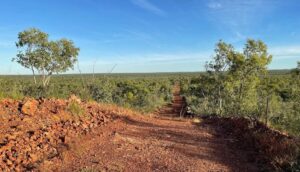