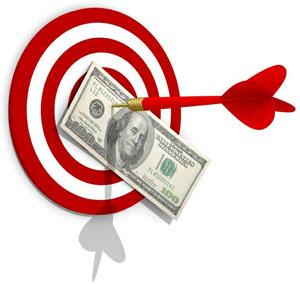 Over at TheMoneyIllusion I did a post discussing Steve Ambler’s presentation on NGDP targeting, and Nick Rowe’s subsequent discussion. Now I’d like to address some concerns expressed by Stephen Williamson.

One concern is that NGDPLT (or average inflation targeting) might be rather complicated to communicate. I believe that’s true of average inflation targeting, but not NGDPLT. Williamson mentioned that each year there would be a different NGDP target growth rate, depending on whether current NGDP was above or below the target path. But I believe it’s a mistake to think in terms of growth rates when evaluating a level targeting regime.

I favor a system where the Fed targets 12-month forward NGDP at exactly the rate implied by a predetermined target path, growing at 4% per year. The focus should not be on current NGDP, or the expected growth rate over the next 12 months, rather the focus should always be on the expected level of NGDP in 12 months. And that expected value should always be equal to the target value. In other words, monetary policymakers should “target the forecast”. Over time, I believe that people would begin to think in level terms, just as with they did with exchange rates under Bretton Woods.

If 12 months is too short (arguably true in the special case of Covid-19) then use a 24-month forward target.  But even with inflation targeting there will be special cases, as with severe supply shocks.

Williamson also argued that NGDPLT might lead central banks to adopt a “lower for longer” policy after an event like 2008, as both RGDP and inflation would be below trend.  In contrast, with an inflation target the central bank need not make up for depressed RGDP.  (Actually, with the Fed’s dual mandate that distinction is less clear, but I’d like to focus on some other issues.)

I have two responses to the questions raised by Williamson:

1.  I believe it’s incorrect to treat the severe NGDP gap of 2008-09 as a given.  In my view, the big drop in NGDP was mostly caused by the Fed’s unwillingness to adopt a policy of 5% NGDP level targeting in 2007.  Had such a policy been in place, the drop in NGDP during 2008-09 would have been far smaller.  This is consistent with models developed by Michael Woodford and others, where current levels of aggregate demand (NGDP) are heavily dependent on expected future aggregate demand, i.e. expected future path of monetary policy.  In 1933, FDR raised current gold prices by promising to raise future gold prices.  Then in 1934, FDR did raise the price of gold from $20.67 to $35/oz.  If the Fed promises to quickly push NGDP back to the 5% growth trend line, then NGDP will fall less sharply below the trend line in the short run.  (Of course that’s not to say there wouldn’t be a recession in 2008-09, but it would have been considerably milder.)

2.  I believe it is a mistake to assume that if a central bank did X and fell short of its inflation and/or NGDP goal, it would have had to do 2X or 3X to have hit the goal.  My claim sounds counterintuitive, but in fact my argument has an affinity to NeoFisherian ideas that have been developed by Williamson.  The very low interest rates of 2009-15 to some extent reflected the low levels and growth rates of nominal GDP during this period.  With higher NGDP and/or faster expected growth in NGDP, the equilibrium (natural) interest rate would have been higher in nominal terms, perhaps allowing the central bank to hit its policy target with a higher policy interest rate.

In 2001, Lars Svensson proposed a “foolproof” method for Japan to escape its liquidity trap.  Svensson’s proposal called for a one-time depreciation of the yen, but the most important part of the proposal was that the yen would subsequently be pegged to the US dollar.  In the long run, this would raise Japan’s inflation close to US levels, due to purchasing power parity.  But due to interest parity it would also raise Japan’s nominal interest rates up to US levels, which were still well above zero back in 2001.  I believe Williamson would recognize Svensson’s proposal as being NeoFisherian in spirit, even though Svensson himself is a New Keynesian.  Svensson reassured his readers that the policy would be expansionary “in spite of” of higher Japanese nominal interest rates, but a NeoFisherian would say there’s no need to say “in spite of”.

We should never assume that if low rates and lots of QE failed, then even lower rates and even more QE would have been needed to hit the target.  That’s one option, but regime change is another.  The Australian central bank did not cut rates to zero, and didn’t do any QE, and yet completely avoided recession in 2008-09.  A credible and successful policy of maintaining adequate NGDP growth expectations in the long run is the best way of keeping equilibrium interest rates above zero, and avoiding the need to do QE.