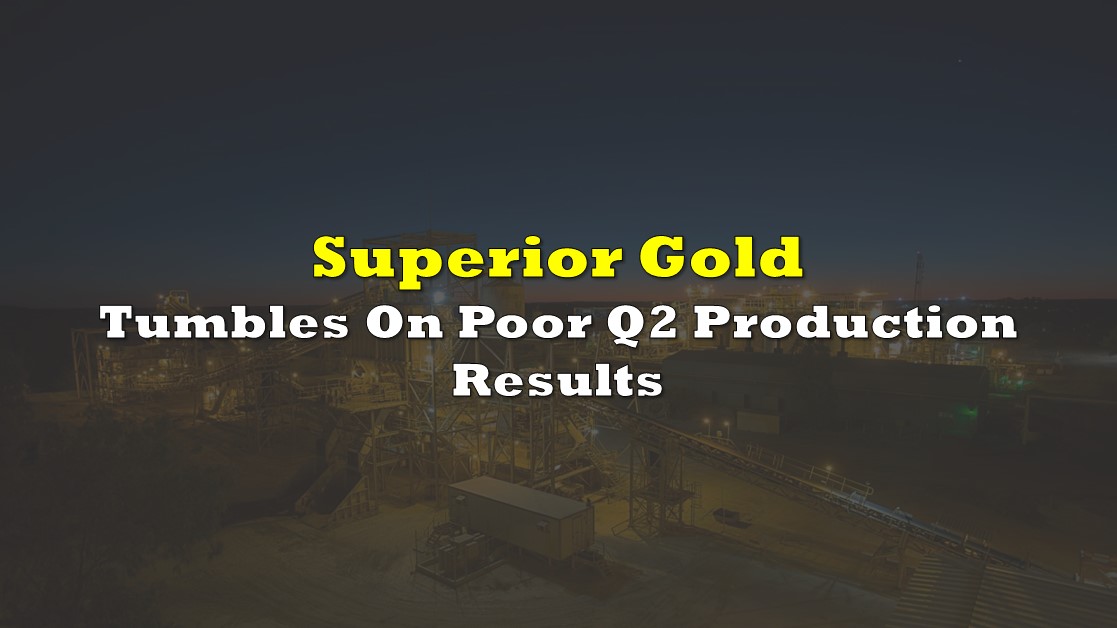 Superior Gold (TSXV: SGI) fell as much as 16.9% today before rallying slightly following the firm posting its second quarter production results. Production during the quarter was said to be hampered by both the ongoing pandemic as well as adverse weather events.

Superior managed to produce a total of 15,196 ounces of gold during the quarter, a 21% decline versus production levels from the year ago quarter, and a 9% decline from the first quarter. This works against previously issued guidance, which had anticipated that the first quarter would be the weakest quarter seen in 2022.

The poor production result was blamed on the firms Plutonic Gold mine in Australia receiving a total of 143mm of rain in May, versus seasonal averages of 15mm, as well as on the removal of Covid restrictions that lead to spikes in illness.

Combined, the issues are said to have prevented planned production, while the company emphasized that it was unable to use mill feed from the Main Pit, which is expected to contain higher grades.

Gold sales for the quarter meanwhile amounted to 16,726 ounces, a 6% increase on a quarter over quarter basis. Ore milled also improved, with a total of 407kt processed.

Looking forward to the second half of the year, CEO Chris Jordaan commented, “We are targeting production and cash flow increases in the second half of 2022, while carefully monitoring for any further disruptions from COVID-19 or other possible situations which could affect production levels.”

The company however elected to not address the issue of guidance as of yet. In January, the firm guided to 2022 production of between 80,000 and 90,000 ounces of gold. The first half of the year however saw just 31,943 ounces produced, setting the company up for a busy second half to the year if they wish to maintain, and meet, current guidance levels. The company notably did previously indicate that it intends to reach a production rate of 100,000 ounces per annum within the second half of the year.

Cash meanwhile has fallen to $18.2 million, down from $20.0 million at the start of the quarter.

Superior Gold last traded at $0.65 on the TSX Venture.