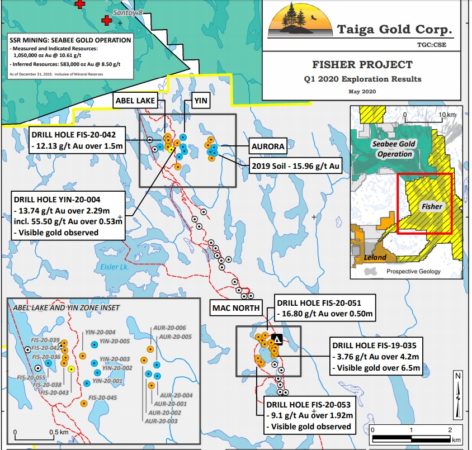 In Saskatchewan, Taiga Gold (TGC.C)
has staked a block of claims it deems to be prospective for gold mineralization
in the Trans Hudson Corridor. The area of interest covers a 1677 hectare zone
no called the Mari Lake claim group and is located within walking distance from
Flin Flon in Manitoba which is well known for its VMS systems with Hudbay
Minerals (HBM, HBM.TO) has a significant presence.

The Mari Lake area has been subject to historical exploration programs and Taiga Gold decided to stake the claims upon confirming two high grade gold occurrences that are about 2.8 kilometers apart and carried grades of 12.69 g/t gold and 14.4 g/t gold. That sampling program was carried out by BHP Minerals Canada in the early 1990s. Despite these promising samples, no dedicated drill program has been carried out and the two holes that have been drilled on the property actually failed to drill-test the stratigraphy Taiga Gold expects the gold mineralization to occur in. This project also appears to be part of the Trans-Hudson corridor, which hosts several gold mines and promising gold projects, including Seabee and Fisher.

The new project could be a welcome
diversification for Taiga shareholders as the company remains subject to SSR
Mining’s (SSRM, SSRM.TO) exploration pace on the flagship Fisher project
where SSR can earn an 80% interest by completing C$4M in exploration
expenditures and making C$3.3M in cash payments to Taiga. So far, SSR Mining
has already spent C$10.3M on exploration but as it hasn’t served Taiga with a
notice, Taiga technically still is the 100% owner of Fisher.

As you remember from our May update, SSR Mining made a new discovery at the Yin Zone which is pretty close to the existing mining operations on SSR’s own land package. With initial drill results encountering 2.29 meters of 13.74 g/t gold, the Yin zone could be seen as the fourth discovery on the Fisher property. Unfortunately COVID-19 prevented SSR Mining to complete its planned winter drill program as the senior producer was only able to complete 9,100 meters of drilling. A new drill program consisting of 3,000 meters of drilling will be kicked off in September and will be focusing on the Mac North area where SSR will follow up on a new discovery made in 2019 when the drill bit encountered 4.16 meters containing 3.76 g/t gold. Drill results of the new drill program should be available in the fourth quarter, so let’s hope SSR Mining immediately shares the results with Taiga.

Disclosure: The author currently has no position in Taiga Gold. Taiga Gold is a sponsor of the website.