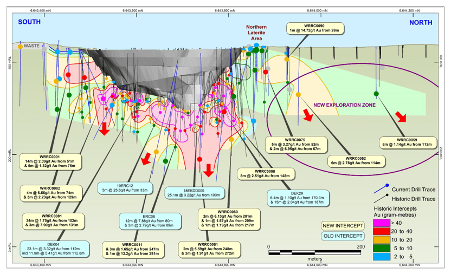 Before TNT came along there had been minimal exploration completed outside the known pit area at Eureka, about 50km from Kalgoorlie.

TNT is yet to find the edges of this gold system following this latest 89-hole drilling program — designed to test four separate target areas.

All assays excluding three holes 800m south of the pit have now been received.

Significant assays returned from the second half of the first pass program at Eureka include:

The first two intersections highlighted above were from a previously untested area 600m north of the Eureka Pit.

The gold here remains ‘open’ at depth and to the North East where the mineralisation is now interpreted to be striking.

Follow up drilling is being designed for this area as part of the next program.

Consistent gold grades were also returned from a lateritic horizon extending directly north of the pit — a potential low-cost source of easily accessible oxidised ounces which had previously not been included in any resource inventory.

TNT will now complete a reinterpretation of the existing mineralisation and prepare an updated resource estimate for Eureka in the coming weeks.

“The results from the Eureka northern high-grade area and also the NE extension are very encouraging, as little to no previous exploration has been carried out testing structures,” TNT chief exec Matthew Boyes says.

“The NE area is of particular interest due to the potential for material incrementation to the current resource inventory as in excess of 2,000m of strike remains untested.”

Meanwhile, drilling below the historic mine at Reids Ridge is underway.

Three holes to date have pierced the structure with visible gold encountered in one of them. Assays are expected shortly, TNT says.

TNT intends to return to Eureka and follow up on the initial drill program once the first pass drilling at Reids Ridge is completed at the end of April.

Program design is currently being finalised with early estimates suggesting around 4,000m of drilling is required.

This article was developed in collaboration with TNT MINES, a Stockhead advertiser at the time of publishing.