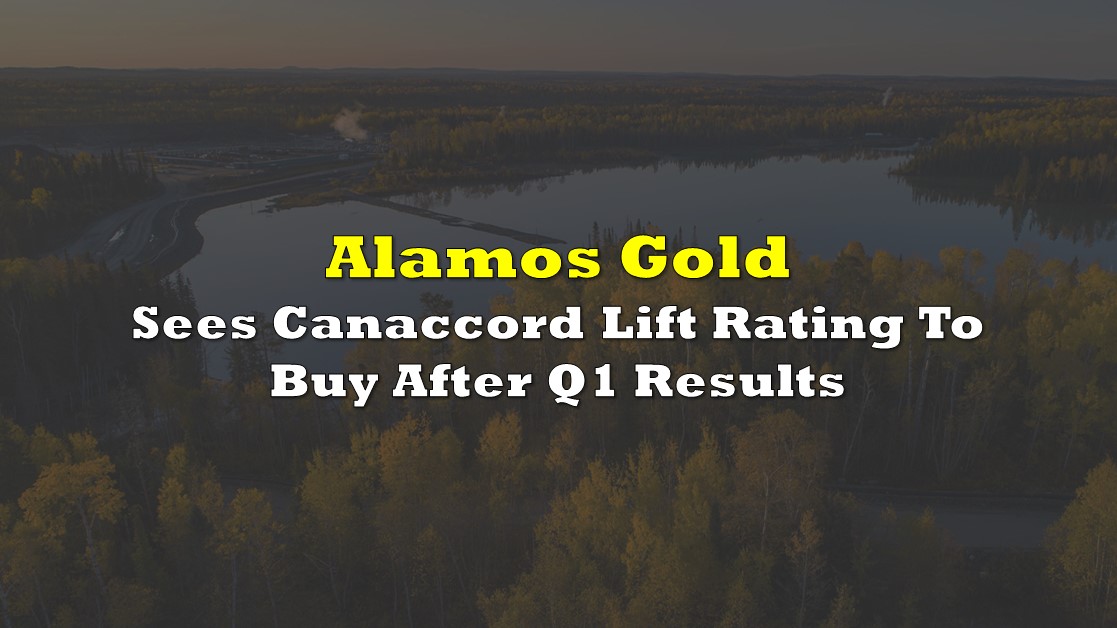 This past week Alamos Gold Inc. (TSX: AGI) reported its first quarter financial results. The company announced revenues of $184.5 million, which is down almost 19% year over year, while gross profits dropped by 44% to $49 million. Alternatively, the company couldn’t outrun inflation, in which it saw its total expenses grow 40% year over year to $16.5 million.

The company reported negative earnings from operations and net earnings as opposed to the positive results it recorded during the same period last year. Alamos saw its net earnings drop from $51.2 million to ($8.5) million, while the company recorded free cash flow of ($40.8) million for the quarter.

The company announced that it produced 98,900 ounces of gold during the first quarter and sold 98,466 ounces, which was sold at an average realized gold price of $1,874. Total cash costs per ounce were $992 and the all-in sustaining costs were $1,360 this quarter.

Full-year 2022 guidance was also provided, wherein Alamos estimates that gold production will be between 440 and 480 thousand ounces. Total cash cost of $875 to $925 per ounce and an all-in sustaining cost of $1,1190 to $1,240 per ounce is expected. Additionally, the company expects to see total capital expenditures and exploration costs of between $332 and $372 million.

In Canaccord Genuity’s note on the results, they upgrade Alamos Gold to a buy rating from hold and reiterate their C$12 12-month price target. They say that the company’s valuation looks attractive, for its pure gold exposure, and “safe jurisdictional risk profile.” Alamos trades at 0.55x NAV versus their competitors, which trade at an average of 0.67x.

Lastly, they see a number of catalysts forming into the second half of the year on top of an “aggressive” share buyback program to be done under the company’s 30 million share NCIB.

On the results, Canaccord says that Alamos came in slightly below estimates but believes that the first quarter will be the weakest for the year as grades at Island Gold improve. Below you can see their estimates for the first quarter.

Canaccord touches on inflation in relation to Alamos, wherein they say that the company is in a good shape and “relatively immune” given the hedges in place, on top of the fact that the Canadian mines are underground and are connected to the grid.

Lastly, Canaccord says that they expect an updated study on the Island Gold Phase III expansion in the near future, and since the original study the mine has added 1.4 million high-grade ounces to the reserves and resources. They say “the new study could envisage an expansion up to the permitted 2,400tpd (from 2,000tpd), along with a re-sequenced mine plan to bring higher grades forward and possibly a new mill.”