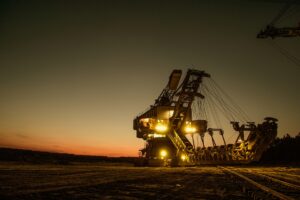 When the investors, brokers, traders and portfolio managers turned on their trading terminals early Monday morning they were encouraged to see the futures markets up and the U.S. dollar down. They knew that since the markets tend to look out about 8-months – this turn in futures and the Greenback could be signaling that perhaps the worst of the U.S. Fed credit tightening cycle might be behind them.

Fission Uranium Corp. ‘FCU-T’ made another significant step towards an eventual production decision for its prized Triple R uranium deposit in Northwest Saskatchewan after the Kelowna, BC based mineral company announced it had entered into an engagement and communication agreement with the local Buffalo River Dene Nation.

Suncor Energy Inc. ‘SU-T&N’ announced that in an effort to enhance shareholder value, the Calgary, Alberta integrated energy company had formed a committee to oversee a strategic review of its downstream retail business that may include selling part or all of their Petro-Canada retail operations.

The way I see it – While the oil & gas industry continues to lead the resource sector with outstanding revenue and earnings reports, the stock market continues to value this sector at much lower multiples. Sooner or later – the stock market always gets it right. So, this means one of two outcomes. Either the market is right now, and petroleum company share prices are going to sink to much lower levels or, the market is wrong at this time and the price of oil & gas stocks will rise to much higher prices.

And further to the observation that the market reacts to rumours – the share price of West Fraser Timber Co. ‘WFG-T&N’ soared up by $15.89 or 14.72% to $123.83 on unconfirmed reports that the world’s largest forestry company was a take-over target.

The Canadian Nuclear Association believes that the pressing need to slash emissions makes the Canadian oilsands, with their remote locations and high energy requirements, ideally suited for the new small modular nuclear reactors (SMNRs) that are designed and built to meet the needs individual operations.