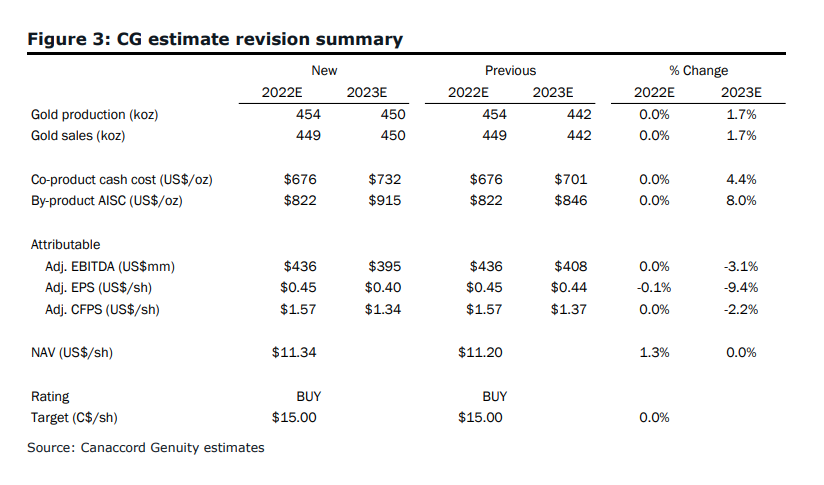 Lundin Gold says that the 2023 gold production estimate is based on an average throughput rate of 4,400 tpd with an average head grade of 9.67 gold per tonne. Though they expect fluctuations during the year, “as different sections of the ore body are mined.” Additionally, they say that cash costs are expected to jump around for 2023.

Lastly, Lundin Gold said that they will be continuing their near mine and regional exploration programs and are planning 28,000 meters of drilling. While the near mine program is expected to drill 15,500 metres and cost $9.4 million.

In Canaccord Genuity Capital Markets’ note on the results, they reiterate both their buy rating and C$15.00 long-term price target, saying that this update, “delivered in a big way, featuring significantly increased expectations.”

Canaccord also believes that the guidance of the mine hitting 500k production, “should attract plenty of attention.” In contrast, the mine has relatively stable all-in-sustaining costs over the next three years. They say that an all-in-sustaining cost of under $900 an ounce is “extremely attractive” and that this low cost “underscores its status as a true cornerstone asset” for the company.

Canaccord adds that FDN would “rank among the best mines in the world” if it were to just hit the midpoint of Lundin Gold’s 2025 guidance. It would also put the mine in the top 6% of production and the bottom 20% of all-in-sustaining costs for primary gold mines. They expect the first quarter of 2023, when the company is expected to give an R&R update for the mine, to be a key event.

Information for this briefing was found via Edgar and Refinitiv. The author has no securities or affiliations related to this organization. Not a recommendation to buy or sell. Always do additional research and consult a professional before purchasing a security. The author holds no licenses.