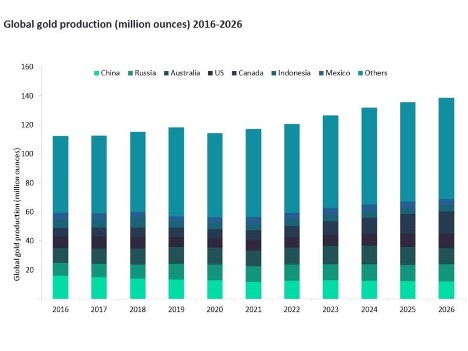 This North American natural resource explorer is advancing the potential of its key gold projects at the 60th parallel of Canada’s Northwest Territories.

By advancing the potential of its gold projects, Rover Metals $ROVR.V said it is helping to assert Canada’s Arctic borders and safeguard the nation’s northern sovereignty above the 60th parallel.

Within the Arctic region’s 21 million square kilometers, eight countries — Canada, Russia, the United States, Denmark, Sweden, Finland, Norway, and Iceland — have exclusive economic rights to resources up to 200 nautical miles from their shores.

Potential at the 60th Parallel

But action is needed to capitalize on these trends. “If there are no new mines coming online in the Northwest Territories, the population, taxes, and government needed to assert Canada’s northern border dwindles creating a potential power vacuum in the arctic,” said Rover Metals Chief Executive Officer and Director Judson Culter.

With its strategic proximity to the key city of Yellowknife, Rover’s 100%-owned Cabin Gold asset and minority owned Up Town Gold asset could be the catalysts that build a critical mass of population, infrastructure, employment, and income, he said.

Cabin Gold is located 110 km northwest of the city of Yellowknife, close to hydro lines and to the Tlicho All Season Road (TASR), the newest corridor of mining infrastructure in the Northwest Territories. Two new gold mines along the TASR are scheduled to see advanced-stage mine development over the next five years: Fortune Minerals Ltd.’s (FT:TSX) NICO Project and Nighthawk Gold Corp.‘s (NHK:TSX.V) Indin Lake project.

Supported by a grant from the government of the Northwest Territories’ Mining Incentive Program, under a mandate to ensure that mineral resource exploration and development continues to flourish in the north, Rover commenced Phase 3 exploration in Cabin Gold in March 2022.

“The project will be a success even if we prove up only 500,000 ounces of gold because we can do a milling offtake agreement with either Nighthawk or Fortune,” Culter said.

New drilling results are expected sometime this summer, but for now, Culter considers Sabina Gold & Silver Corp.’s (SBB:TSX; RXC:FSE; SGSVF:OTCPK) Back River project to be “the closest geological analog in terms of how we’re going to follow on our discoveries. Plus, we’re in the same neighborhood and with relatively the same type of rocks.”

“We believe the Up Town Gold project has the potential for a million-plus ounces,” Culter said.

If exploration continues to be successful in proving up ounces of gold, Up Town has a high chance of resale within the next two years. Newmont Corp. (NEM:NYSE) is active in the Yellowknife area, having optioned their gold claims at the southern city limits to Gold Terra in 2021.

In addition, Culter said, “A new producing gold mine pushes the demand for new exploration and discoveries in the northern territories, paving the way for shipping and airborne logistics, new jobs, and the potential for new highways and hydro infrastructure. For every new head hired into a junior mining company, there’s a multiplier of two and a half new jobs hired into the supply chain that supports that company.”

With assets in all the right places, Rover Metals is relatively under-appreciated and undervalued, Culter said.

“We’re at the very bottom of the Pierre Lassonde discovery curve, with only one direction but moving up ,” he said. “We need another $4 million or $5 million in drilling, but over the next two years, there’s critical ounces and value in our Cabin Gold project.”

The company has just raised $2 million dollars at a time when other junior miners have struggled to raise anything.

Newsletter writer Clive Maund agreed, writing when the share price was $0.04 that Rover Metals was an immediate speculative buy. The price hovered at $0.04 on Monday.

“This, therefore, looks like a good low price to pick it up and this is said in the knowledge that it could temporarily break even lower,” he wrote. “As it is only at 4 cents now, it can’t drop much lower.”

2) The following companies mentioned in this article are billboard sponsors of Streetwise Reports: Rover Metals Corp. Click here for important disclosures about sponsor fees. The information provided above is for informational purposes only and is not a recommendation to buy or sell any security.

4) From time to time, Streetwise Reports LLC and its directors, officers, employees or members of their families, as well as persons interviewed for articles and interviews on the site, may have a long or short position in securities mentioned. Directors, officers, employees or members of their immediate families are prohibited from making purchases and/or sales of those securities in the open market or otherwise from the time of the decision to publish an article until three business days after the publication of the article. The foregoing prohibition does not apply to articles that in substance only restate previously published company releases. As of the date of this article, officers and/or employees of Streetwise Reports LLC (including members of their household) own securities of Rover Metals Corp. and Gold Terra Resource, a company mentioned in this article.