All of this in the face of the worst quarterly decline in GDP ever in Q2, and continuing unemployment over 10%. What’s going on?

Before I continue further, let me emphasize that I am not giving investment advice, and I do not believe there is any “actionable information” for investors in this post. But I do think there is a decent explanation for the huge bifurcation between the economy as a whole and the stock market.
There are 3 points to be made:
1. Background longer term fundamental factors for the economy are very positive.
2. All other industrialized countries beside the US have controlled the pandemic.
3. Market gains are completely bifurcated, and are essentially limited to the 6 biggest players in the global economy and in home delivery.
Let’s go in order.
1. Background longer term fundamental factors for the economy are very positive.
The most important longer term leading indicator for the economy is interest rates. Low interest rates and easy money power strong growth. Higher interest rates and limitations on credit strangle growth.
And on that score, interest rates are the lowest they have ever been, whether we measure in terms of corporate bonds (blue), US Treasury’s (red), or mortgage rates (gold):

We would expect this to power growth, and it has already made an impact on the housing market, as shown when we compare mortgage rates (gold, inverted) with housing permits (green):

Lower mortgage rates cause more people to buy houses. Housing permits have already made back about half of their pandemic losses as a result.
Add in easy credit, as shown by the Chicago Fed Adjusted Financial Index (below), and you’ve got the basis for a healthily growing economy as soon as the pandemic is contained (note: in this index a negative number is good):

As a result, Wall Street believes that the worst in corporate profits is behind us, and that over the next year, profits will gradually grow towards a new record: 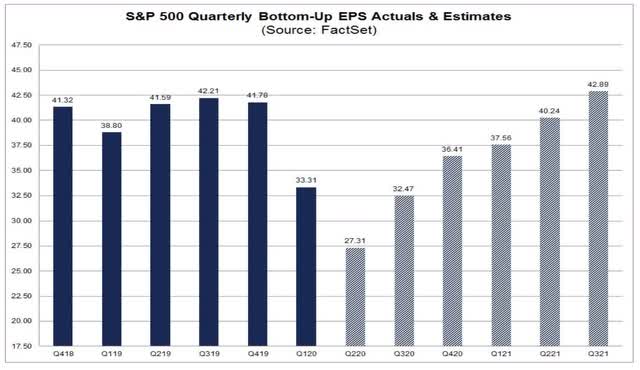 2. All other industrialized countries beside the US have controlled the pandemic.
Here’s the graph of the 7 day average of deaths from the coronavirus for all the other major industrial powers (+NY, our best large State, for comparison): 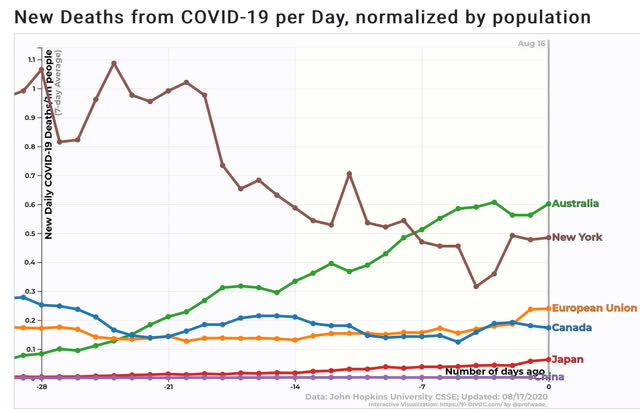 All except Australia have less than 0.2 deaths per million per day on average. Even Australia is only slightly worse than New York.
In other words, the lion’s share of the developed world’s economy has returned to normal or close to it, and every US company exposed to that economy is benefiting from it.
3. Market gains are completely bifurcated, and are essentially limited to the 6 biggest players in the global economy and in home delivery.
The 5 FAANG companies – Facebook, Apple, Amazon, Netflix, and Google – +Microsoft account for almost 1/4 of the entire S&P 500 by market capitalization: 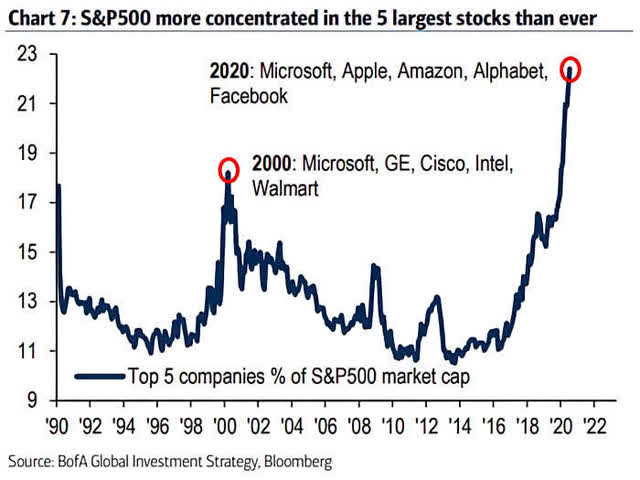 This is the most concentrated the market has been in generations.
What is most noteworthy is what happens when we break out their profits vs. the profits of the other 494 S&P 500 companies: 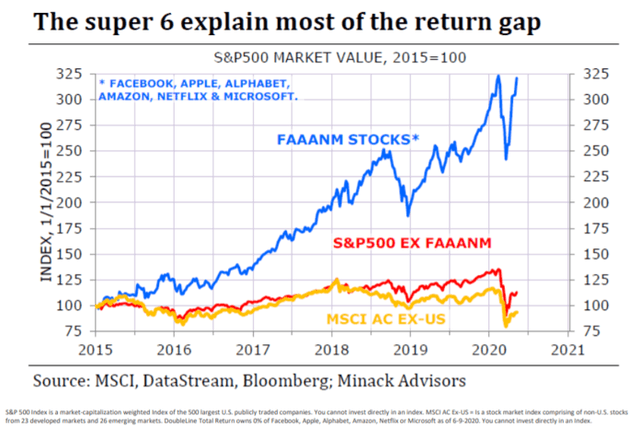 The above graph norms the categories as of the beginning of 2015. What is more important for our purposes is to compare vs. the beginning of 2018. Since then, FAANG+Microsoft  stocks have increased over 40% in price, while the rest of the S&P 500  has gained virtually nothing. Even at its record in February it was only about 12% higher than its high in January 2018. In short, except for 6 stocks, the S&P has gone nowhere in over 2 1/2 years.
What do the 6 FAANG+Microsoft stocks have in common? They either exclusively have a digital hardware and software presence (Facebook, Apple, Netflix, Google, Microsoft), or couple that with a delivery service (Amazon).
In other words, those six have both a global footprint, so they benefit from the recovery in the rest of the world outside the US, and inside the US, they either are not affected by the closure of many businesses, or else actually benefit by delivering goods and/or online content to homes.
In short, the S&P 500 is close to a new record high because the market anticipates a solidly improving domestic economy over the next year, globally exposed companies experiencing robust international growth now, and the market’s biggest players are actually *benefitting* from so many people inside the US staying home.