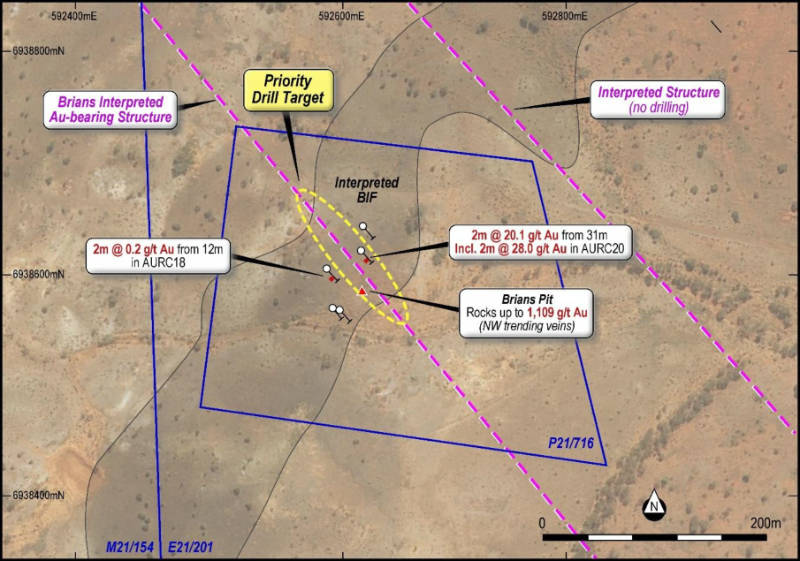 The prospectivity of Silver City’s newly acquired Austin project has received a boost after resampling of drilling by the vendor returned high grade gold hits.

Resampling of samples from previous shallow reverse circulation drilling at the Brians prospect by Gardner Mining in 2020 returned a top hit of 2m at 20.1 grams per tonne (g/t) gold from 31m, four times greater than the original composite spear sampling result of 2m at 4.9g/t gold.

The results suggest that 1m composite samples and leachWELL assay are a superior representative assay for the intersected mineralised interval and may indicate that other historical spear sampling results are potentially understated.

More importantly, Silver City Minerals (ASX:SCI) believes that the results are related to high-grade gold veins at surface which returned rock chip samples of up to 1,109g/t gold that were observed in the Brians pit that trend northwest.

This is a similar orientation to the mineralisation at the nearby Starlight, White Light and White Heat discoveries made by Musgrave Minerals (ASX:MGV) at the adjacent Cue gold project.

Work by the company has identified at least one high priority drill target where the interpreted northwest trending structure intersects the BIF host rock, that has not been tested by previous drilling.

“These exciting gold results and interpretation work at Brian’s help to confirm the critical northwest control to high-grade mineralisation,”

“This detailed work not only highlights an exciting local drill target but also represents a detailed study area that has provided key geological parameters that will greatly assist our regional strategy to aggressively explore the Austin Project.”

It also contains several historical gold intersections and highly mineralised outcrops that have never been properly followed up.

Reprocessing of airborne magnetic data to target and interpret cross structures, particularly those on a northeast orientation that are known to host high grade gold in the district, is currently underway.

The company is also carrying out regolith mapping to identify subtle gold-in-soil anomalies as well as comprehensive fine fraction multi-element soil sampling programs along the Teds trend and Shadow Target, to identify further drill targets in areas with no historical soil geochemistry coverage.

Over the coming months, Silver City plans to carry out a gradient array induced polarisation survey over the area from Mt Brunswick to Brians in order to identify areas of extensive disseminated sulphide and silicification/quartz veining associated with gold mineralisation.

Limited shallow drilling at Brunswick Hill has returned high grade hits such as 6m at 15.8g/t gold from 36m.

It will also complete a targeting matrix across the project to rank each of the targets and launch a preliminary drilling program on highly mineralised gold intersections that have never been followed up at depth.

Additionally, strategic diamond drilling will be carried out to accurately define the orientation of gold-bearing veins and sulphide alteration.

This article was developed in collaboration with Silver City Minerals, a Stockhead advertiser at the time of publishing.