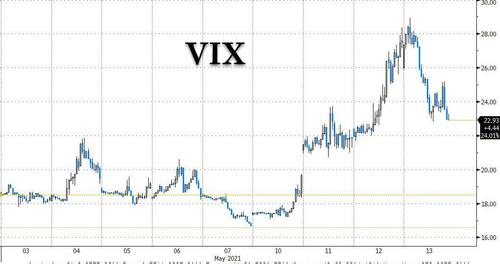 It was an erratic day, which in so many ways was a mirror image of yesterday, and even though today's blistering PPI print confirmed yesterday's near-record CPI number, traders who expected a continuation of yesterday's action were left nursing big losses.

Perhaps it was the fervent defense of the "transitory inflation" narrative on Wall Street, but whatever the reason, yesterday's surge in the VIX reversed sharply, with the fear index tumbling from yesterday's high of 29, sliding to session lows of 23.

This was enough to activate risk on mode in vol-targeting funds and momentum chasers, which saw spoos surge 90 points form a session low of 4030 to 4120 at the close...

... even as tech stocks found it more difficult to overcome gravity with the Nasdaq dipping into the red by mid-day only to rebound as we approached the close, with Bloomberg pointing out that after months of misery, the NYSE FANG index may be poised to blast off having formed a triple bottom around 6,100.

Helping the risk-on mood was not just the plunge in the VIX but also the sharp drop in yields, and despite a rather ugly, tailing 30Y auction,. the 5Y breakeven yield tumbled all day and was set to close below Tuesday's low, completely fading yesterday's CPI spike.

Which is not to say that all stocks were roaring higher: Cathie Wood's ARK Innovation ETF, which from "do no wrong" has turned into the market's Anti-Midas, tumbled again, dropping below $100 per share..

Nowhere is the pain as concentrated as in the index of profitless tech companies, where the slide has continued and after peaking in late February, the index is now down almost 40% from the highs!

There were also important developments in the commodity sector which many have been keeping an eye on recently to gauge upstream price pressures, with oil sliding after the reopening of the Colonial Pipeline (which merrily paid $5MM in crypto to its ransom-seeking hackers)...

... while the closely watched lumber price appears to have finally peaked, dropping limit down for the 3rd consecutive day as the commodity never managed to catch up to gold...

But the biggest highlight of today's session was neither stocks, nor bonds, nor currencies, but crypto which had a dismal day, first after Musk's tweet, then hit more after Bloomberg announced that Binance was being probed by the DOJ and IRS, and finally after Gasparino tweeted that regulators may be looking into crypto electricity consumption.

So with this confusing set up, one where commodity inflation appears to be peaking even as CPI and PPI are finally soaring leading to further tech stock revulsion, we look toward tomorrow's potential data tiebreaker, the April retail sales, which as we noted earlier (using BofA card spending data) will likely be a big miss to consensus expectations. Whether that resets the reflation scare and whether growth stocks will surge as a result, is anyone's guess.

This article was originally published at http://feedproxy.google.com/~r/zerohedge/feed/~3/gZUAuPro24Q/stocks-surge-crypto-crushed-commodity-fever-breaks-lumber-slides-3rd-day