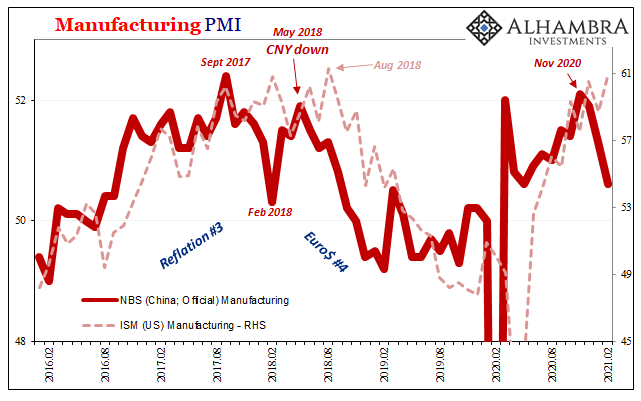 The offside of “synchronized” is pretty obvious when you consider all possibilities. In economic terms, synchronized growth would mean if the bulk of the economy starts moving forward, we’d expect the rest to follow with only a slight lag. That’s the upside of harmonized systems, the period everyone hopes and cheers for.

What happens, however, when it’s the leaders rather than laggards who begin to shift toward the other way?

It’s a question the global economy has confronted four times over the past thirteen years. Each time, at least during the introductory inflection phase, rather than being clear it becomes a muddied mess of disbelief. The word “decoupling” enters the discussion as if “synchronized” applies only in the one direction.

On September 4, 2018, America’s ISM reported its Manufacturing PMI for the month of August had climbed to 61.3. Not only had that beaten expectations of a modest “trade war”-driven deceleration, this would be the highest this index had gotten since 2004. This 14-year best was claimed to be further evidence, along with the declining unemployment rate, of that year’s biggest mainstream themes: stimulus-driven inflation easily overcoming any residual negatives leading toward 2019 finally behaving like the first real recovery since, ironically, around 2004.

The reason “trade wars” had entered the conversation at all had been due to a good part of the rest of the world, particularly global leaders like Japan, Germany, and China, countries who were suddenly stumbling even before mid-year. Rising dollar, too.

If it had been Trumpian tariffs to blame, then why not “decoupling?” When the ISM’s number came out early September 2018, many influential observers saw it exactly that way:

Mohamed A. El-Erian, chief economic adviser at Allianz, tweeted, “In addition to highlighting the strength of the U.S. #economy, this also points to the more general theme of divergence in advanced countries’ economic performance and policies.”

China’s Manufacturing PMI, in contrast to the ISM (or Markit’s for the same sector of the US economy) had peaked all the way back during the month of September 2017 – eleven months earlier. Not only that, it had dropped considerably to begin 2018 (February) as contrary warning signs accumulated; and then fell again late spring following the dollar’s sharp rise during April and May.

It’s always this transition where interpretation finds it most difficult (how can central bankers get it so wrong again?)

Sticking with the same PMIs (you could also use other datapoints, too), way back in the early months of the post-2008 “recovery” throughout the curiously wild volatility of 2010 China had yet again reached its high a long way before certainly the US would: China’s NBS climaxed in early 2010 while it would take another year for the ISM to reach its own peak a year later.

Either way, by the middle of 2011 the same problems had become similarly obvious; no recovery, only downturn where recovery should have been. Nothing decoupled.

The same would repeat in 2014, with the two PMI peaks at least occurring closer together this time before a third globally synchronized fall-off.

The ISM reports today that its manufacturing PMI moved back above 60.0 for the month of February 2021. Rising to 60.8 from 58.7 in January, that’s better than the 60.5 the index had registered for December 2020 now taking over the highest since August 2018.

Over on the other side of the Pacific, China’s NBS Manufacturing PMI has moved more noticeably in the opposite direction. Peaking instead back during November of last year at 52.1 – incidentally, that had been the best since September 2017 – over the last three months Chinese manufacturing sentiment has declined back to just 50.5 for February 2021.

As noted last month, it’s even worse, much worse, for China’s services sector; the NBS had reported a massive decline in its Non-manufacturing index during January (from 55.7 in December to 52.4) and now another sharp drop to 51.4 in the latest estimate for February. The New Orders subindex was below 50 (48.9 latest) in each of those two months.

How bad is 51.4? The non-manufacturing index value has only been less on just three prior occasions going back to the start of 2007: February 2020 and November, December 2008.

In other words, here we are yet again in the same proper position, wondering, first, if China’s data might hopefully be anomalous; the NBS manufacturing PMI, in particular, had demonstrated serious volatility during these similar reflation-becoming-downturn periods which had convinced some to believe the Chinese economy was experiencing only shorter-term turbulence. This particular sentiment index had dropped sharply from 51.6 for December 2017 to just 50.3 for February 2018 before rebounding almost as quickly coming back to 51.9 for the month of May 2018.

Such volatility, however, in both those cases it ended up merely the prelude to the eventual downturn which followed – in the data as well as in the real economy being measured by it.

If China’s growing retrenchment in 2021 is likewise something more serious than noisy data, then that leaves “decoupling” open for its certain return engagement (Decoupling #5); though it might take a few months because when the Chinese report their economic numbers later this month (for the combined January-February period) they’ll be compared to the same two months in 2020 (base effects) which, for China, had been the worst of it.

Perhaps China is no longer a leading economy. Maybe this really is just the volatility we should expect with economies struggling back from highly unusual circumstances. But what if this is really the same thing repeating itself for a fifth time?

If the last of those, the Chinese “no sharp turns” policy takes on a drastically different interpretation. As does, importantly, the condition of that country’s service sector as maybe the most leading of any leading indications. Joe Biden’s upcoming helicopter isn’t likely to change any of these things, even if American consumers were in any mood to spend much of it.

Synchronized is and has been a double-edged sword, its downside continuously hacking “decoupling” to pieces.