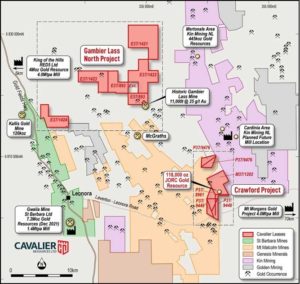 Cavalier Resources has boosted the resource at its Crawford gold project in the busy Leonora region of Western Australia, where the majors are on the hunt for more of the precious metal to fill their underutilised mills.

Cavalier Resources (ASX:CVR) revealed today a 17% increase in the Crawford resource to around 3.8 million tonnes at 1 gram per tonne (g/t) for 117,800oz of gold.

Importantly, this resource upgrade further de-risks mining at the project, with Cavalier’s goal to generate early cash flow from the project to fund exploration at its Ella’s Rock nickel-gold-lithium project in the Forrestania Greenstone Belt in WA.

“The company’s initial campaign over the existing resource was designed to provide further confidence for mining activities via infill drilling to grade control standards over the central supergene lode and test for potential extensions to the resource along strike and depth,” executive technical director Daniel Tuffin explained.

“Both goals have been achieved.”

The resource remains open along strike and at depth, which provides Cavalier with plenty of exploration upside potential and spurred the company on to undertake more drilling.

“Significantly, while the central supergene lode has now been de-risked for mining, the complexity of the remaining resource areas has increased,” Tuffin noted.

“The discovery of a new sub vertical zone and the confirmation of the northern fresh rock zone indicates that further exploration drilling is required at Crawford.

“The expert’s report concurs, recommending further exploration of the extent of the resource given it remains open along strike and at depth.”

Tuffin said in light of these new discoveries and developments, Cavalier would now look to pause the pre-feasibility study (PFS) to allow further time for review and to plan the implementation of a second drill program at Crawford to investigate the new zones and test the further extension of mineralisation along strike and at depth.

Majors crying out for gold

The upgrade comes close on the heels of Dacian Gold’s (ASX:DCN) plea to fellow nearby explorers to reach out and have a chat about toll treating their ore.

Things are getting spicier in the region, with a tug of war in play between Genesis Minerals (ASX:GMD) and Kin Mining (ASX:KIN) for Dacian.

Genesis’ interest in Dacian was likely driven by the already built and operating Mt Morgans mill, which would cost well over $200m to replicate in today’s construction market.

The gold price has recently staged a bit of a recovery, heading back over $US1800 ($2,645) an ounce, and is headed for further gains, according to the Bank of America.

Commodity strategist Michael Widmer sees gold getting back up to $US2,000/oz by the end of 2022 and taking a bit of a breather in the first quarter of 2023 before again resuming its climb to average around $US2,086/oz in 2024.

The key driver will be the anticipated halt to increasing interest rates by March next year, with cuts expected to resume by December 2023.

A good sign the market is heading for better times is the record level of gold central banks are buying. The World Gold Council said in early November central banks had topped up their reserves with just shy of 400 tonnes of gold, worth around $20 billion, in the third quarter of 2022.

This boosted purchases for the 12 months to September 2022 to 673 tonnes, far exceeding the previous quarterly record in data going back to 2000 and more than total purchases for any full year since 1967.

“Despite a shaky macroeconomic environment, demand this year has reflected gold’s status as a safe haven asset, underscored by the fact that it has outperformed most asset classes in 2022,” Louise Street, senior markets analyst for the World Gold Council, said.

“Looking ahead, we anticipate central bank buying and retail investment to remain strong and that could help offset potential declines in OTC and ETF investment that may prevail if the dollar strength persists.”

This story was developed in collaboration with Cavalier Resources, a Stockhead advertiser at the time of publishing.