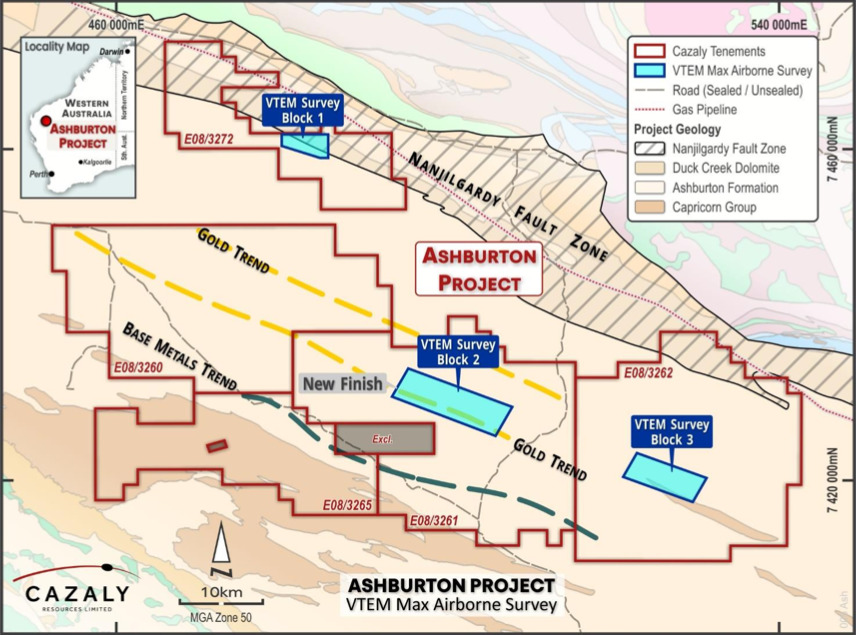 Cazaly is drilling at its Halls Creek copper project, but has continued exploration at its other prospective gold plays in WA – namely the Ashburton and Yabby projects.

An Airborne Electromagnetic (AEM) Survey is expected to be flown this week across several targets at the Ashburton Project which covers more than 2,450km2.

Plus, surface sampling of fine fraction soils and streams has recommenced.

“The work at our Ashburton Project will complete our comprehensive surface geochemical database for the area,” Cazaly Resources (ASX:CAZ) MD Tara French says.

“We will then be able to use this information along with any EM conductors identified in the AEM survey to rank and prioritise areas for further work.

“The work at our Yabby Project has refined discrete gold targets; ranking will be confirmed following a ground truthing assessment, and the best targets will be tested with aircore drilling.”

The AEM survey is designed to fly 275-line kilometres across three blocks, with block 1 to test an area along the Nanjilgardy Fault with anomalous historical surface geochemistry.

The Nanjilgardy fault is a major regional scale structure marking the boundary between the Capricorn Orogen and the Pilbara Craton and is associated with deposits including Black Cat’s (ASX:BC8) Paulsen’s gold mine and Kalamazoo’s (ASX:KZR) Mount Olympus gold mine.

The Yabby project covers 16km2 of the highly prospective Laverton Greenstone Belt, with tenements 10km west of Laverton, and directly west of the Chatterbox shear zone – which is a known host to several gold mines currently owned by Focus Minerals (ASX:FML).

Recent surface sampling at Yabby has defined surface anomalies suitable for drill testing and the N-NNE orientation of the refined gold mineralised trends is analogous to the adjacent Chatterbox shear zone host to Apollo, Whisper and Eclipse gold deposits mined by Focus in the 2010s.

“This provides further encouragement that these surface anomalies reflect gold in the bedrock beneath and are drill worthy targets,” Cazaly said.

This article was developed in collaboration with Cazaly Resources, a Stockhead advertiser at the time of publishing.