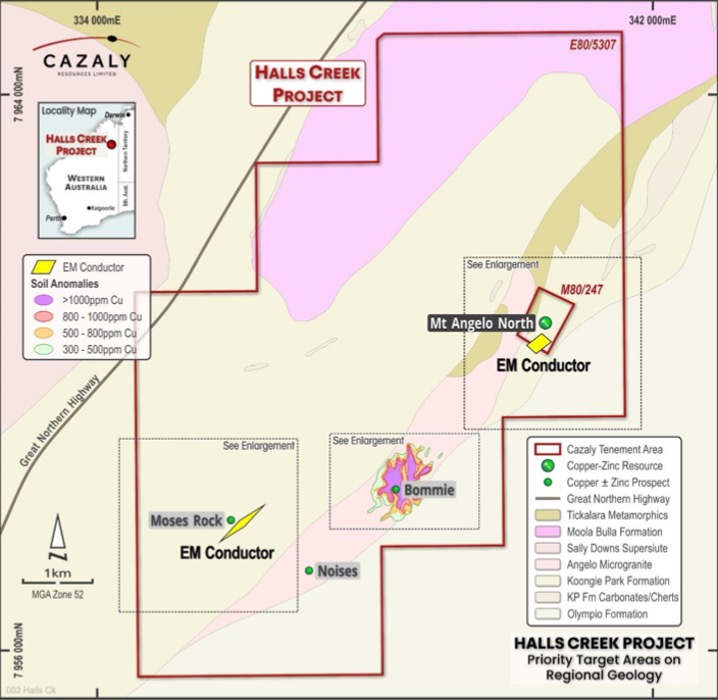 Cazaly is champing at the bit to start around 2,000m of RC drilling at its Halls Creek copper-zinc-silver project in WA.

But Cazaly Resources (ASX:CAZ) MD Tara French says Bommie could be something big.

“We’ve got a massive sulphide target, which is the Moses Rock prospect, but the Bommie prospect is exciting because of its large surface geochemical signature, and broad drill intercepts, which indicate the potential for a large scale, cohesive porphyry copper mineralised system,” she says.

“The aim at Bommie is to drill it out sufficiently so that an inferred copper resource can be estimated.

“Moses Rock is a discrete copper-silver-zinc VMS target while Bommie is a large porphyry copper target – where we’re drilling some deep holes to 350m to test for higher grades of copper and gold at depth.”

“At Halls Creek, the Koongie Park formation is host to several small but high grade VMS deposits, more tonnage is required to make it more of a profitable economic proposition,” French said.

That’s where Cazaly comes in.

“The Bommie Project is potentially a larger scale project with high tonnage potential, the lower copper grade could be blended with the high grades that we’re hopefully going to see at Moses Rock – and we know we already have in spades at Mount Angelo North.”

Exploring the Ashburton and Yabby projects

French says the Ashburton project in the Pilbara is a big gold and base metals exploration play for the company – and its smack bang in the region hosting Northern Star’s (ASX:NST) Paulsen’s gold deposit and Kalamazoo’s (ASX:KZR) Mount Olympus gold deposit.

“We’ve already completed a lot of on ground work there given that the tenements were only granted late last year,” she says.

“We finished first pass surface geochemistry across 65% of the project area which has identified 50km long mineralised trends – and we’ve still got about 30km left to test.

“The aim there is to test the remainder of the tenements with surface geochem, but because it is a big land package – almost 2,500km2 – it will take time to work up and prioritise targets using surface geochemistry and structural interpretation to generate drill targets.”

Infill sampling has also recently wrapped up at the company’s Yabby project about 10km west of Laverton in Western Australia’s north-eastern Goldfields.

The company also has a stake in the McKenzie Springs Nickel JV with FIN Resources (ASX:FIN) and the Mt Venn nickel-copper JV with Woomera (ASX:WML).

Add some royalty streams to the mix from divested assets

“I think a good testament to that is the two royalty stream agreements that we’ve got in the Parker Range and Hamersley iron ore projects.”

“Mineral Resources (ASX:MIN) started production at Parker Range in September 2021, and we’ll receive a royalty after the first 10mt that are produced.

“We anticipate that royalty stream will kick off in late 2024, if there are no delays to mining activities.”

On top of that, Cazaly retains 15.7% equity in Equinox Resources (ASX:EQN) and a royalty interest of US$0.30/tonne produced from the Hamersley project.

This article was developed in collaboration with Cazaly Resources Limited, a Stockhead advertiser at the time of publishing.

The post Cazaly takes a giant leap towards drilling into large tonnage at Halls Creek appeared first on Stockhead.