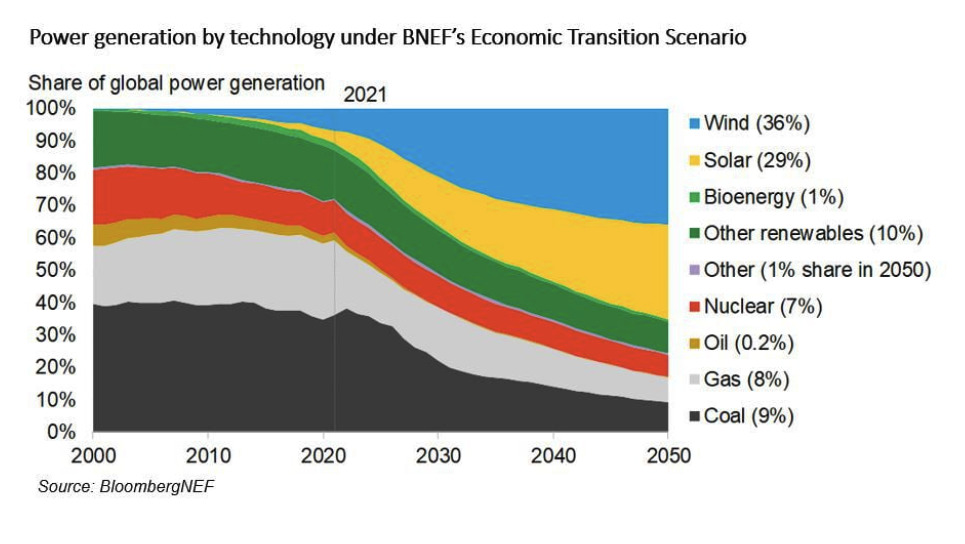 Bloomberg New Energy Finance (BNEF) says an energy transition pathway consistent with the Paris Agreement of keeping global warming well below 2C is possible but getting there requires immediate action and major investment in carbon capture and storage, advanced nuclear technologies, and hydrogen.

According to BNEF’s New Energy Outlook 2022, the Net Zero Scenario (NZS) sees a pathway consistent with a 1.77C temperature rise by 2050 (with a 67% likelihood) with no overshoot or the need for net-negative emissions post-2050.

This trajectory, BNEF says, gives a 33% chance of staying within 1.5C, but a better than 67% chance of staying below 2C with rapid deployments of clean power generation, electrification and to a lesser extent, carbon capture and storage (CCS) and hydrogen.

David Hostert, global head of economics and modelling at BNEF and lead author of the report, says to get on track this decade, there needs to be $3 invested in low-carbon supply for every $1 in fossil-fuel supply.

“Clean power deployment needs to quadruple by 2030,” he explains.

“There are also critical enabling factors to consider – electrification and economic growth will quadruple the planet’s power demand by 2050.

“We need to see a massive acceleration in the build-out of power grids, manufacturing capacity for low carbon technologies, and supply of critical metals and materials.

“These could become painful bottlenecks tomorrow, if left unaddressed today.”

Wind and solar domination by 2050 under Net Zero Scenario

BNEF says switching power generation from fossil fuels to clean power is the single biggest contributor to global emissions reduction, accounting for half of all emissions abated over 2022–2050.

The rest will be provided by renewables (7%), nuclear (9%), hydrogen and coal or gas with carbon capture.

Electrification of transport and industrial processes, buildings and heat – using increasingly lower-carbon electricity – is the next biggest contributor, abating about a quarter of total emissions over the period.

An investment opportunity of $194 trillion between now and 2050 is implied in both fossil and clean energy supply projects, as well as clean demand-side areas such as electric vehicles and heat pumps.

While electric vehicles alone draw 47% of all tracked investment to 2050, the ratio of investment in clean-energy supply to fossil sources must average 2.9 in this decade, and then rise to 4.9 in the 2030s and 9.7 in the 2040s, BNEF explains.

“This means that, for every dollar invested in fossil-energy supplies between now and 2030, $2.9 should be invested in clean energy supplies, such as renewable energy, clean hydrogen and carbon capture, rising to nearly $10 after 2040,” BNEF says.

“These ratios can provide a guide for financial institutions wishing to align their investing and lending activities to a net zero trajectory.”

Interestingly, the annual rate of emissions captured by CCS grows from very low levels today to 1.7 gigatons of CO2 in 2030, 4.9 gigatons in 2040 and 7.3 gigatons by 2050 – a volume comparable to the combined power sector emissions of China, the US and Europe in 2021.

Global hydrogen use also jumps more than fivefold to 2050 under the NZS, growing from over 90 million tonnes today to 501m tonnes. While most hydrogen production today is grey, produced from unabated fossil fuels, by 2050, BNEF finds low-carbon hydrogen produced with flexible grid-connected electrolysers powered by renewables and nuclear power becomes the dominant pathway in the NZS.

Growth is driven by use in the energy industry (163m tonnes), where it helps decarbonise fuel refining, fuel extraction and equipment operation, and by applications in steel making (144m tonnes).

RIO is planning to invest further $600 million in renewable energy assets in the Pilbara as part of the company’s efforts to decarbonise its Western Australian iron ore operations.

The investment will fund the construction of two 100MW solar power facilities as well as 200MWh of on-grid battery storage in the Pilbara by 2026.

This is in addition to the 34MW of solar power installed at the recently commissioned Gudai-Darri iron ore mine.

Construction, which will involve the installation of approximately 225,000 solar panels built to withstand the Pilbara’s cyclonic conditions, is expected to start next year ahead of project commissioning in 2025.

READ: Monsters of Rock: Rio says demand for its metals will rise 25% by 2035 thanks to the energy transition

MEZ has selected Woodside Energy as the preferred partner to move forward to the development stage of the proposed Southern Green Hydrogen (SGH) project in New Zealand.

While a final investment decision is expected to follow the development stage, MEZ chief executive Neal Barclay says the company is very pleased to be partnering with the oil and gas major.

“Like us, Woodside is focussed on progressing a world-class hydrogen and ammonia facility in Southland, New Zealand, that will provide significant benefits to the local community,” he says.

“Woodside has demonstrated climate change ambitions, and as we are a 100 per cent renewable energy company and committed to sustainability, that was a key focus for us in selecting a partner.”

Meridian says discussions are ongoing with Mitsui & Co to join the project and develop the potential market for ammonia offtake, with the aim of creating a world-class collaboration that covers the full hydrogen and ammonia supply chain.

Subject to finalising commercial arrangements, Meridian, Woodside and Mitsui will work towards commencing front-end engineering design for the project.

PGY has been approached by a group of investors to commit $2m in a placement to sophisticated, institutional and professional investors.

The company says strong investor interest was shown in the placement along with support for its focus on developing the Mid-West Clean Energy Project (including the Cliff Head CCS Project) in Western Australia.

Pilot is now funded to complete the next steps to progress the Cliff Head CCS Project to final investment decision.

Other activities like detailed front-end engineering and design, costings, and continued engagement for potential partnership arrangements for the CCS project are also included.

The post Emission Control: The world has a chance of staying below 2C… if clean power deployment quadruples by 2030 appeared first on Stockhead.