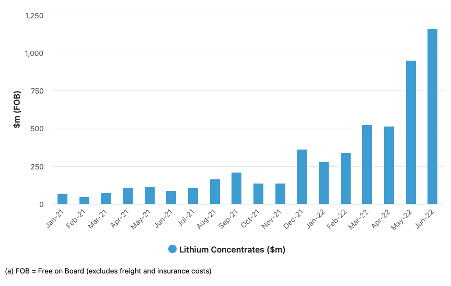 All your ASX lithium news for Friday, August 5.

The Australian Bureau of Statistics (ABS) says lithium is forecast to contribute $9.4 billion in revenue to our economy by 2023-24.

Not really surprising since Australia is the world’s biggest exporter of lithium.

“Australian exports of lithium are primarily in the form of spodumene concentrate however as global demand grows, several Australian lithium mines are commencing production of lithium hydroxide,” the ABS said.

For most of 2021, monthly lithium exports didn’t exceed $250m, but exports values more than doubled from November to December 2021.

From April 2022 to May 2022, exports of lithium almost doubled again, and in June 2022 surpassed a massive $1 billion for the first time.

WA accounted for over 99% of Australian lithium exports in each month since January 2021.

And China is the one buying it all.

Breaking that down into monetary value, in June 2022, $1,128m worth of lithium was exported to China.

That’s around 97% of the total lithium exports for that month.

The company has received a massive vote of confidence with premium automobile manufacturer BMW AG signing up to be its first offtake partner for battery-grade lithium hydroxide from the Wolfsberg project in Austria.

BMW AG previously flagged that by 2030, 50% of its sales would be electric vehicles, a move that is certainly welcome in the European Union given its move to effectively ban petrol and diesel cars from 2035.

BMW AG has been granted the first right to purchase 100% of the lithium hydroxide produced from identified resources at the project, which currently stands at about 12.88Mt grading 1% Li2O.

Should both parties agree to a binding contract, BMW AG will make an upfront payment of US$15 million, which will be repaid through equal offsets against deliveries of the battery chemical.

Proceeds from the prepayment will be used for the development of the Project including supporting the commencement of the construction phase and further progress towards the successful implementation of the Wolfsberg Project.

Greenwing has wrapped up a Transient Electromagnetic (TEM) Geophysical survey at its San Jorge Lithium brine project in Argentina, which it says has “significantly expanded the surface area underlain by a highly conductive response, indicative of an expanded brine body.”

CEO Craig Lennon said the information will be used to finalise locations for the Phase 1 drilling program, to confirm the range of lithium concentrations and porosity values in the project.

“We look forward to commencing the maiden drilling program when the permit is approved by the Mines Department, amid the continued strong outlook for lithium long term,” he said.

Drilling is planned for September/October.

Core has appointed a new CEO in Gareth Manderson, who has 28 years’ experience in various leadership and technical roles.

“There are many synergies between Gareth’s previous senior roles in managing complex mine, mineral processing, port, township and logistics operations during his tenure at Rio Tinto and the Finniss Project which is 25km from the Darwin CBD and port.

“Gareth’s previous Northern Territory experience and managing the effects of the annual wet season will also be essential as we plan to be operating in this environment for years to come.”

At Stockhead we tell it like it is. While European Lithium is a Stockhead advertiser, it did not sponsor this article.

The post Eye on Lithium: Lithium exports go parabolic, set to contribute $9.4b to Australia’s economy by 2023-24 appeared first on Stockhead.

Argonaut Gold Might Have A Gigantic Cash Problem Ahead, Magino’s First Gold Pour Not Yet In Sight 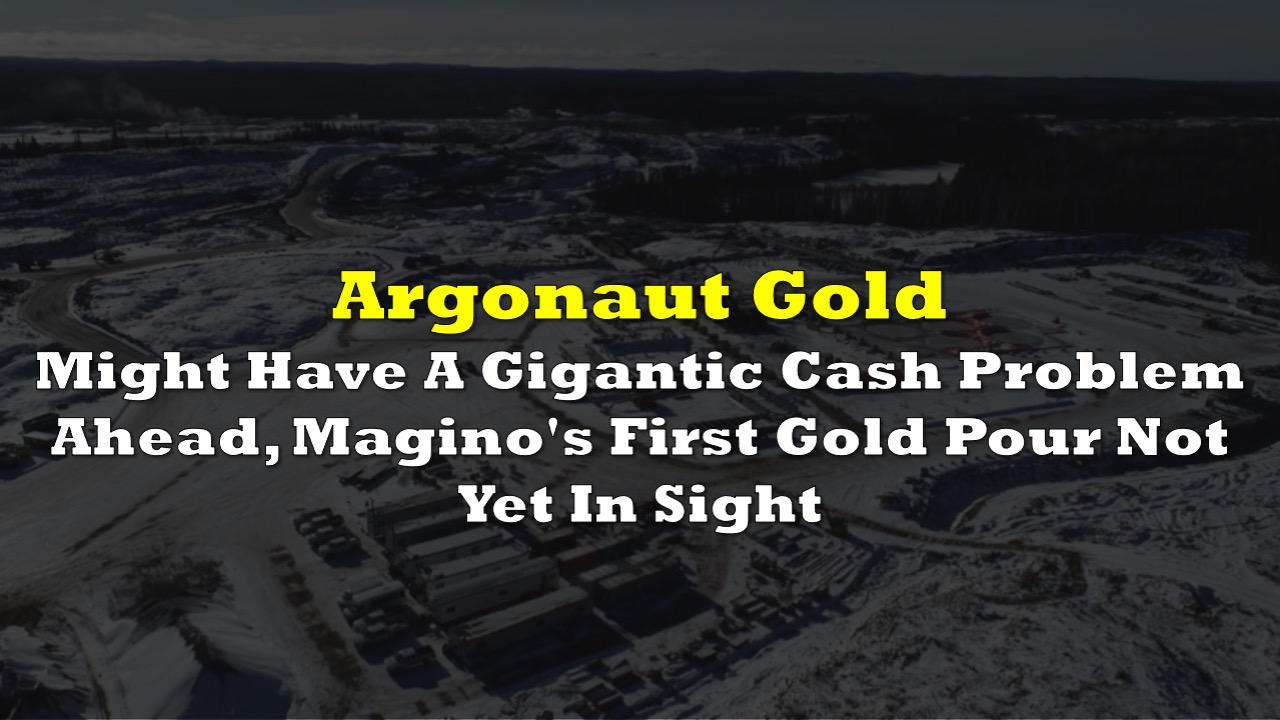