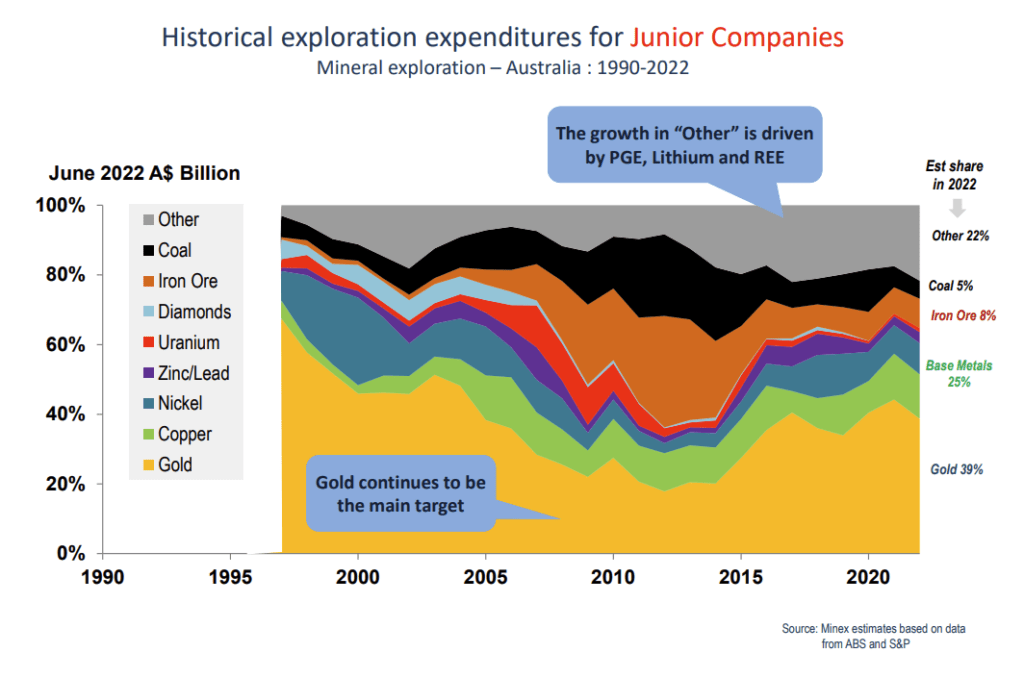 All your lithium news, Tuesday November 29.

Aussie junior explorers are forecast to spend around A$1,720m on exploration this year – an achievement which mirrors what was reached back in 2012 during the last mining boom, according to MinEx Consulting veteran minerals economist Richard Schodde.

Over the last couple of decades, he says the share of total exploration spend by junior companies has varied from 40% to 50% moving in synch with the business cycle.

Although gold may still be the main target for these companies, strong growth is picking up in exploration on critical minerals such as lithium.

Today, the bulk of the news in the ASX lithium space revolves around pegmatite finds, lithium drilling and resource development at various projects around the country and oversees.

Cygnus Gold (ASX:CY5), for example, was up 4.08% by lunch time on news its latest drilling program at the Pontax Lithium Project in Canada’s James Bay region has doubled the known depth of mineralisation to 230m after intersecting multiple pegmatites in all three holes.

The third drill hole intersected a fresh 13.3m spodumene-bearing pegmatite at bottom of hole on a new mineralised trend, demonstrating the system is continuous and completely open in all directions.

Spodumene was also observed throughout the recent holes and is the only lithium mineral observed within the dykes, with up to 40% spodumene in places.

Meanwhile, Atlantic Lithium (ASX:A11) continues to pull exciting grades out of the ground at the Ewoyaa Lithium Project in Ghana where ongoing resource extension work is being conducted.

35 lithium companies finished in the green, 36 fell flat, and 62 nose dived into a sea of red.

Who else has got news out?

FRS has identified a new pegmatite occurrence at the Calypso prospect – within its namesake project in Western Australia – which it says corresponds with significant pegmatite and granitoid intersections interpreted in historic aircore drilling.

This is an excellent outcome for the geology team, FRS chairman and CEO John Hannaford says.

“While it is still only early days in terms of our exploration efforts at Calypso, this is significant, being the first pegmatite outcrop, which corresponds with historic pegmatite drill hole intercepts on the western flank of the Forrestania project.

“The Calypso prospect is located around 5km west of our South Ironcap East prospect and 4.5km west of IGO’s South Ironcap prospect, where 50m at 0.95% lithium oxide was recorded in pegmatites in a nickel focussed drill hole.”

OCT has identified multiple pegmatites at the Pinnacle Well lithium prospect around 10km to the north of Global Lithium’s (ASX:GL1) Archer Lithium deposit in the East Pilbara.

Earlier mapping and pXRF analysis of soil samples had identified a number of priority targets within the wider Talga Project, including an extended area of elevated Li-index analysis results around and to the north of the Pinnacle Well prospect.

A number of rock samples have been collected for analysis with results anticipated to be received in the coming weeks.

Planning is underway for the initial aircore drilling of the lithium geochemical anomaly identified at the Merivale prospect, within the wider Eyre Project in Western Australia.

“Encouragingly, the required Program of Work has been approved and an aircore drill rig has been sourced to undertake the drill program.

“Some 4,000m of drilling is planned upon completion of heritage surveys that commenced this week.”

Latin Resources’ Cloud Nine halloysite-kaolin project in WA is more valuable than ever following a 33% increase in resources to 280Mt of kaolinised granite.

Notably, the company’s confidence in the resource has also increased with 70Mt of the resource now reporting to the Indicated resource category, meaning enough information on geology and grade continuity is available to support mine planning.

Adding further value for LRS, about 116Mt of the global resource (26.7Mt Indicated) is made up of bright, white kaolinite-bearing material while infill drilling has allowed for 85Mt of high-grade (58%) halloysite-bearing material to be defined in the Inferred Resources category.


The post Eye on Lithium: The ASX small caps busy drilling for more of that white gold appeared first on Stockhead.