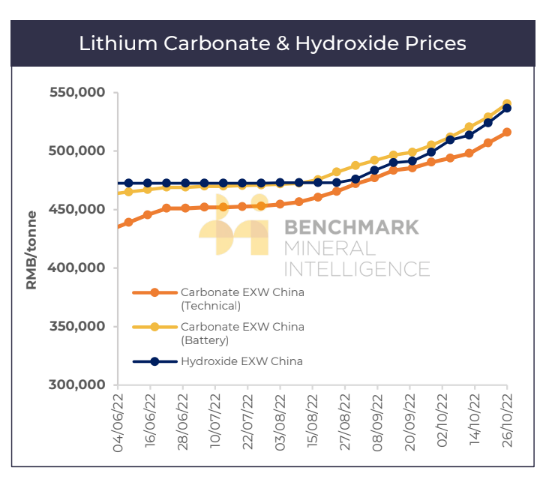 All your lithium news, Thursday December 8.

Lithium prices in China continued to climb in the first half of November before stabilising in the latter half, as rumours swirled that downstream battery supply chain players would limit production for the rest of 2022.

Benchmark added that some spodumene contract pricing mechanisms tied to the lithium chemicals spot market could have been successfully renegotiated, allowing for a shorter lag time for pricing movements in the chemicals market to be reflected in spodumene pricing.

This could have been behind the notable uptick on the lower end of pricing as these contracts moved closer in line with recent developments in the Chinese lithium chemical spot market.

New supply was brought online by NYSE listed Livent and Allkem (ASX:AKE), who both added new lithium hydroxide capacity at their respective projects in the US and Japan to meet growing demand from customers.

Downstream customers have also moved to secure supply with South Korea’s SK On signing an offtake agreement with Chile’s SQM, for the supply of 57,000 tonnes of lithium hydroxide over a five-year period from 2023.

On the spodumene front, feedstock supply has also received a boost after Pilbara Minerals (ASX:PLS) secured a $250m debt facility to support expansion of its Pilgangoora project in WA.

Only 28 lithium companies finished in the green today.

A program of initial site reconnaissance spotted widespread indications of pegmatite throughout the project – along with an outcrop hosting “abundant large spodumene crystals”.

The company plans to begin targeted and systematic on-ground exploration once its tenure has been approved by WA’s Mines Department.

Emerging lithium explorer SGQ  has entered into a memorandum of understanding (MoU) to establish a strategic relationship to collaborate with SVOLT Energy Technology Co.

The SVOLT MoU will last for an initial term of two years, with a range of potential outcomes.

One of them includes a $5m investment in SGQ by SVOLT subject to pricing and completion of due diligence, offtake arrangements to secure up to 25% of future spodumene concentrate production from SGQ’s Mt Alexander lithium project, funding support and a potential JV to acquire and develop new lithium projects.

LRS has defined a maiden resource at the Colina lithium deposit, within the Salinas Project in Brail in just 10 months from only 10,528m of drilling.

With eight drill rigs scheduled to be onsite from mid-January, Latin says it will be aggressively drilling throughout the new year.

Initial assays received from 10 out of 18 reverse circulation drill-holes have confirmed the presence of significant shallow, high grade lithium bearing pegmatite at Faraday prospect within the wider Mt Edwards Project.

WIN plans to accelerate exploration with RC drilling, which it says will begin in January to test potential down dip and strike extensions (over 400m of untested outcrop).

LPI has completed the acquisition of water rights covering its Maricunga lithium project in Chile.

With this acquisition of the 62 litres/second CAN 6 rights, the company can replace a long-term lease that it previously held for part of its water requirements.
The Stage One project will produce an average of 15,200 tonnes per year of  battery grade lithium carbonate and will have a low freshwater consumption of just 8 l/s.

Power Minerals has launched a preliminary economic assessment (PEA) at the Rincon salar at the Salta Lithium-Brine Project in the lithium triangle of north-west Argentina.

The PEA, which will be completed to Scoping Study level, is being conducted by global engineering and mining consultants Golder Associates and will assess the production and life-of-mine profile, along with engineering and process costs, plus capital costs and operating costs for a potential high-quality lithium carbonate (LCE) producing operation at Rincon.

PNN says it will contemplate conceptual production of a minimum of 2,000tpa LCE, via DLE, at each of the Rincon, Incahuasi and Pocitos salares; for a total of 6,000tpa LCE.