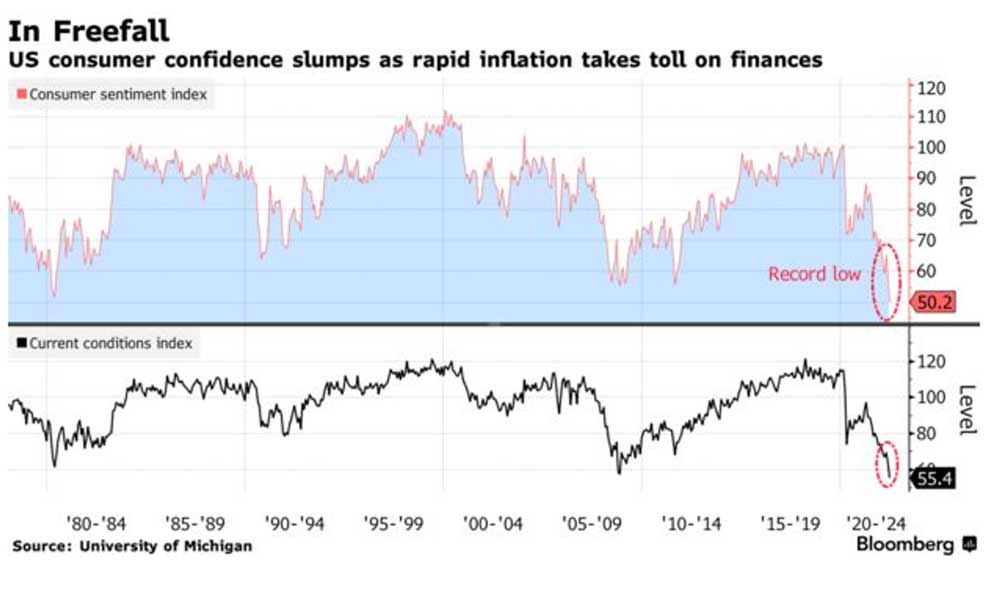 Fulp went on to point out that the Toronto Ventures Exchange (TSX-V), a bellwether for North American small caps, has been range-bound around 715 +/-20 points  for around 20 days of trading average volume of just 24 million shares per day; volumes not seen since August/September 2004 (the TSX-V was established 2002).

Kitco contributor Chris Vermeulen noted (10 June 2022) that crude oil appeared to accelerate in price even as consumers reacted to the rising interest rate cycle over 2005-2006.

The result was a more “aggressive” collapse.

Note the oil price move from US$70 to US$140/bbl versus the Consumer Discretionary ETF (IYC) over the same period (figure 2) as discretionary spending fell away.

As many of the Stockhead faithful recall, as the GFC took hold in October 2008, the IYC fell 55% with oil retreating to US$33/bbl.

IYC has been falling since early November 2021 (for over 7 months) and crude oil has already risen from $62 to $121/bbl. That would suggest we could be reaching a similar set of financial metrics soon.

Uranium (figure 4) was up over 7% to US$52.4/lb for the week on the back of the Democrats’ plan for a US$4.3 billion package to support domestic uranium enrichment and conversion (despite no existing operating facilities in the US) in an attempt to reduce its dependency on Russian supplies.

Not surprisingly the negative economic data saw copper come off 17 cents to close at US$4.30/lb for the week.

While both base and precious metals will continue to respond to economic data, the change in the use of metals (e.g., battery metals), the extreme supply disruptions as a result of the Ukraine War and Covid 19 together with the ongoing energy crisis will make forecasting all the more challenging; more than likely this will underpin a longer-term metals super cycle.

Those who believe that CO2 is directly related to global warming should stop reading now.

Brener (2001) pointed out that if CO2 levels were over 4000 ppm between 400 and 500 million years ago and these levels couldn’t end a deep freeze Ice Age lasting millions of years, why would 400 ppm do it now?

Is there something special about the CO2 we got now? It appears figure 6 is not something that will appear in the current politically correct environment as it is very harmful to the CO2 global warming argument!

For further reading I recommend https://www.adividedworld.com/scientific-issues/co2-levels-in-air-dangerously-low-for-life-on-earth/.

Spare a thought for the recently dismissed HSBC head of responsible investing Stuart Kirk who gave a presentation at the Financial Times Moral Money conference in London in May 2022 entitled “why investors need not worry about climate risk”.

Apparently these statements didn’t accord with “HSBC’s strategy and do not reflect the views of the senior leadership of HSBC or HSBC Asset Management”.

Well, I believe Stuart is correct. Don’t worry Stuart, as Jim Carrey said, “…the truth will set you free” (Liar Liar, 1997). https://www.youtube.com/watch?v=1jQP0Y2T2OQ. Mind you, a slightly different context but a great quote. Nothing further Your Honour…

The energy and climate change train wreck continues on its merry path; this should create a lot of opportunities to re-enter some previous recommendations as much of the junior resources sector has been sold down 40-50% from their highs.

As I have indicated over recent weeks, the gold sector is testing two-year lows (figure 7) and if you are a believer in the gold thematic, then companies such as Northern Star Minerals (ASX:NST) and junior explorers such as Nexus Minerals (ASX:NXM) (figure 8) represent good value.

The caveat is obviously rising input costs for the producers.

While the previous focus has been Archaean gold exploration, the discovery of outcropping yttrium-bearing rocks in December 2021 from a PXRF result has modified the company’s focus to include rare earths.

ASR then proceeded to re-assay previous vacuum auger and RC drilling which has turned up a 3.6km x 1km area of anomalous REE in the top 100m.

The rare earth mix is dominated by heavy rare earths (figure 11) with 60-70% ratios of heavy to light REE,  a more desirable mix for technology/defence applications.

Anomalous yttrium at the Wishbone Prospect can be traced for over 3.5km and appears to be related to the underlying mafic rocks. Yttrium also showing a close correlation with copper, cobalt and nickel.

A 160m x 40m drill program is planned to target the gap between Yttria and Wishbone (figure 12). A mineralogical study by the University of Queensland is also underway.

Importantly, unlike many REE projects, there is no association with uranium or thorium which should assist in the production of a potentially “clean concentrate”.

Drilling so far suggests that REE mineralisation occurs between the surface and 20m in flat tabular bodies varying from 1 to 9m in true width.

A maiden REE JORC Resource is due to be published at the end of 3Q 2022; it will be well worth keeping an eye out for this.

An updated JORC Resource (currently standing at 100Koz) is also due out on their gold prospects shortly which will hopefully underpin the $44 million enterprise value with the REE providing further upside.

With some choppy markets ahead there will be some buying opportunities with companies such as ASR (and others mentioned here previously), so I would recommend putting this on the watch list.

One of the keys to unlocking the value of REE is cracking the metallurgy. Stay tuned.

The post Guy on Rocks: The junior resources sector is down 40-50pc from recent highs. Buy the dip? appeared first on Stockhead.