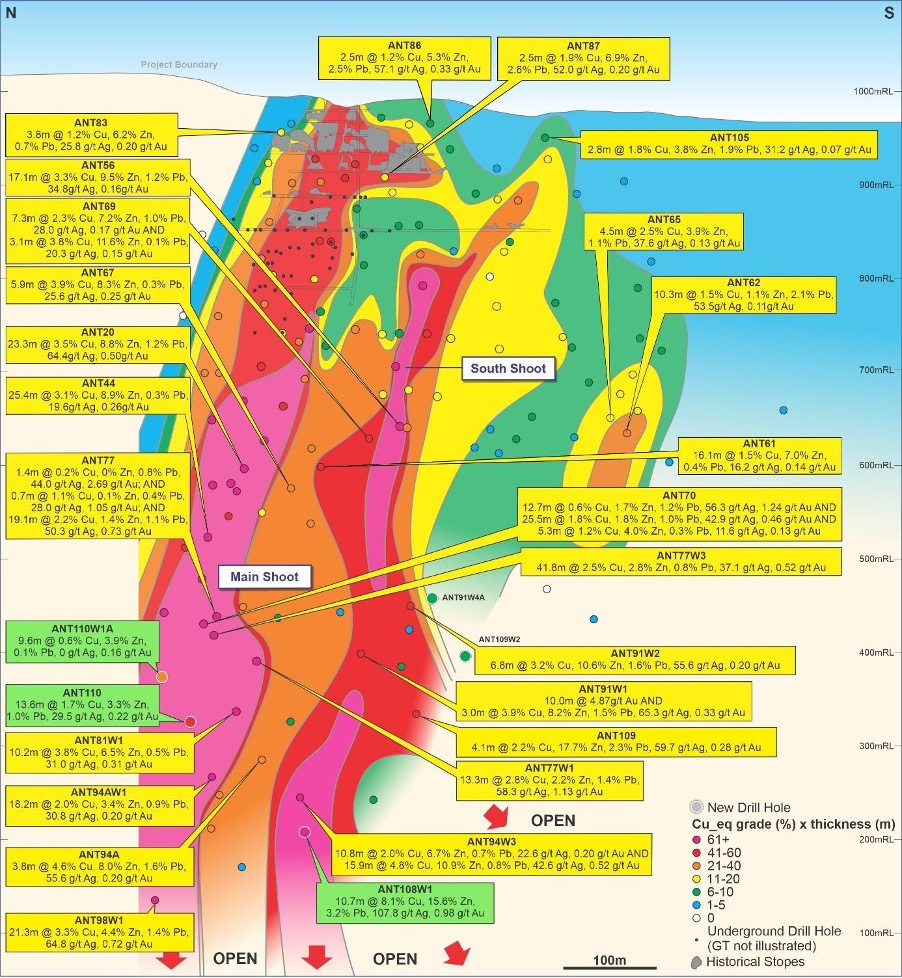 The high grades being found at New World Resources’ Antler copper deposit in Arizona mean the future mine could be ‘profitable throughout almost all commodity cycles’.

Those comments from New World Resources (ASX:NWC) managing director Mike Haynes come after the explorer hit the highest grade copper to date at its Antler project in drilling at the deepest hole in the South Shoot zone.

For reference, exploration experts say a good VMS copper hit tends to be around 2% copper or above.

While grade is not necessarily always king when it comes to copper, it certainly can be a major factor in how profitable a mine of the scale of Antler will be.

It already has a resource of 11.4Mt at 4.1% CuEq, a very attractive number bound to be expanded on given the recent drill hit is no outlier.

It is 66m down-dip from a hit of 26.8m at 7% CuEq, previously the best in the Antler system, showing the deposit just keeps getting better at depth.

“We are very pleased to have intersected more than 10 metres of the highest-grade mineralization yet encountered, averaging 13.7% copper-equivalent, in the deepest hole yet drilled in the South Shoot at the Antler Project,” Haynes said.

“This hole intersected the South Shoot 66m down-dip from another recently completed hole that intersected a combined thickness of 26.8m @ 7.0% copper-equivalent.

“This shows that these ultra-high grades are present within a substantial area.”

Most commodity forecasters see copper prices far above current levels by the end of the decade as major shortages emerge.

The chairman of Codelco, the world’s largest copper producer, has fingered the copper deficit at 8Mt by 2032, equivalent to more than a quarter of the current market.

It is a situation that bodes well for deposits like Antler, last mined in the early 1970s, which Haynes says will be profitable in most copper price scenarios.

“It also reinforces our view that, because of its very high grades, the Antler Deposit could be profitable throughout almost all commodity price cycles,” he said.

“The Project stands to deliver exceptional returns if high copper prices prevail, as forecast, later this decade – by which time Antler is expected to be in full operation.”

Assays for hole ANT108W1 were not included in the recent mineral resource update, with results from another four holes at the southern end of Antler and Main Shoot also demonstrating the consistency of copper and zinc mineralisation through the project.

The recently updated mineral resource is currently being plugged into an updated scoping study designed to demonstrate increased production rates and or a longer mine life, with a new mine design to be incorporated into a larger pre-feasibility study.

NWC will focus exploration efforts early next year on IP targets identified over a 6km strike to the north-east of Antler, where it is believed the identification of shallow mineralisation could increase cash flow early in its operation life.

“Notwithstanding this, the economics of developing the Antler Project should be enhanced with a larger resource base, so further exploration drilling will be undertaken both at depth and along strike from the Antler Deposit, as compelling, as-yet undrilled exploration targets have been delineated in both areas,” the company said.

The post High grades set Antler copper mine up to stand tall in all commodity cycles appeared first on Stockhead.