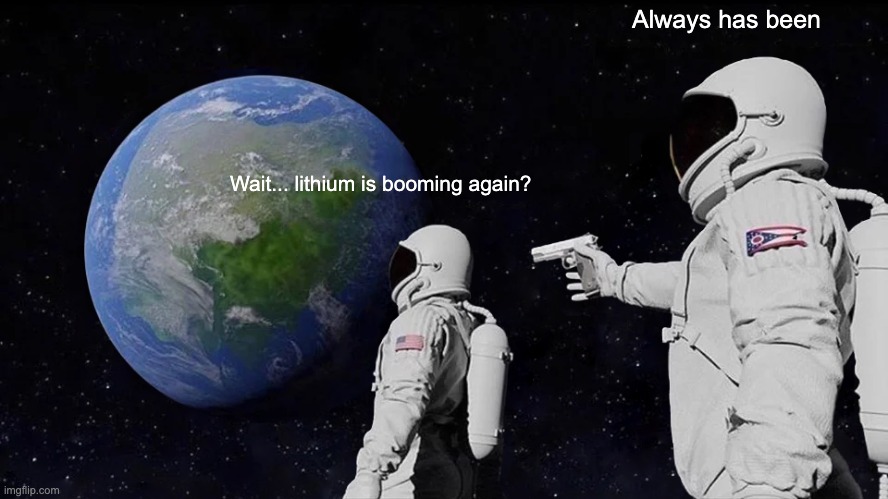 It turns out perma-bears Goldman Sachs and Morgan Stanley may’ve been premature with their predictions of a lithium slowdown in 2023.

$PLS rakes in over $9 million a day in ridonculous December quarter as lithium prices surge https://t.co/OfzurTKAhy

Yesterday, it was UBS’ turn to bring some joy to investors as they upgraded spodumene and chemical prices by up to 50% over its forward estimates.

Punters should take commentary with a grain of salt

“With EV adoption picking up, some industry experts predict the gap between lithium demand and supply will remain or even wide[n] in 2023,” S&P writes, citing near term producers like Tees Valley Lithium and Vulcan Energy Resources.

And yet a survey of Asian market participants (aka the buyers) “presented a more conservative view of lithium prices”, S&P says. Shocker.

And when it comes to the analysts, lithium legend Ken Brinsden says it best:

“There’s a lot of ill-informed commentary in lithium markets,” he says.

“And it’s kind of a shame because, in some respects the investing public put faith in especially the big banks, but the truth is, the big banks are not close to the lithium market, really at all.

“And as a result, a lot of their commentary is just fundamentally flawed.

“Analysts want to … imply that supply will come easily but nothing could be further from the truth.

“Lithium raw material supply is really difficult to develop, and will be for quite some time, because the mines are measured in five to seven to 10-year increments for development, and that’s just not the speed that’s required for the demand side growth that’s going on.”

The graphite explorer is all green after returning to trading on the ASX on January 20.

LML was placed in bourse purgatory way back in September 2020 because it had no cash and was doing f’all exploration.

LML spent 2021 doing mostly nothing, but woke up in 2022 when it received an unsolicited takeover offer from fellow South Australian project developer Quantum Graphite (ASX:QGL).

The initial all share offer (1 QGL share for every 40 LML Shares held, valuing the company at ~$6m) was rejected by the board and substantial shareholders in the company, but QGL has today extended its offer again for the third time.

What’s changed? The QGL share price, which is now ~70% higher since the offer was first made September last year (although well down on the high of 70c from earlier this month).

$167m market cap QML says LML’s Kookaburra Gully project has synergies with its own mothballed, century-old ‘Uley’ graphite mine in South Australia, one of the largest high-grade natural flake deposits in the world.

But like LML, QGL doesn’t have a great track record of success.

That’s the sixth best cobalt intercept in Australia for 2022, the JV says.

All up, the JV has hit three zones in drilling: an upper nickel-cobalt-manganese-scandium horizon, middle PGE horizon & lower nickel horizon.

It has been a rollercoaster 12 months for the Mt Thirsty JV, which is just 200m from Galileo Mining’s (ASX:GAL) Callisto palladium discovery announced May last year.

The ore grade of most hard rock lithium mines around the world ranges between 0.8% and 1.5% Li2O.

“It is hard to find words to adequately describe the impressive nature of the lithium mineralisation in drill hole CV22-083,” says Darren Smith, vice president of Exploration.

“Visual estimates of spodumene abundance may give you a sense, but assays are the true measure and have certainly astounded with this hole.”

It is the widest, highest grade lithium drill intercept returned to date at the CV5 Pegmatite, where mineralisation has been traced over a strike length of at least 2.2km, so far.

This includes a large, high-grade zone at least 250m long. Mineralisation remains open along at both ends and to depth along most of the pegmatite’s length, PMT says.

Assay results for 24 drill holes from the 2022 drill campaign remain to be reported.

The post High Voltage: Lithium is booming again because the analysts say it is appeared first on Stockhead.