Chile produces more copper than any country in the world. But what about gold? One Vancouver-based junior explorer is seeking Chile’s next company-maker gold deposit, and it’s already finding similarities with another long-time gold and silver producing mine.

The hole returned 3 meters grading 3.96 grams per tonne gold (3.96 g/t Au) and 37.67 g/t silver (Ag) as part of a broader intercept of 0.92 g/t Au and 8.61 g/t Ag over 31 meters at the Paciencia vein. The junior explorer now knows the mineralized zone in the Paciencia vein is at least 300 meters long —and it remains open at depth and along strike.

Another highlight was hole PPRC-22-24 (read this as: Pampa Paciencia reverse circulation-year-hole number) which hit 2.78 g/t Au and 75.6 g/t Ag over 2 meters, as part of a broader zone of 0.72 g/t gold and 19.38 g/t silver over 25 meters downhole at the Paciencia Oeste (Paciencia West) vein. This indicates a second mineralized zone, which is at least 200 meters long — it, too, remains open at depth and along strike.

The 18 holes were part of a 29-hole reverse-circulation drill campaign that wrapped up earlier this year. Results from the other 11 holes were published on May 2. The entire drill program cost the company an affordable CA$650,000.

The vein structures at Pacienca Oeste and Paceincia Este were between 10 and 20 meters thick — that’s true thickness — and these occurred in shallow drill holes, usually 15 to 25 meters below surface (one hole went down as far as 75 meters at Paciencia Oeste).

“The vein thickness is consistently wide, and indicative of a large epithermal system under the gravel cover. We’ve identified two mineralized shoots, defined 1.4 kilometers of vein strike, and discovered two blind veins beneath the cover — all of which are shallow (less than 120 meters below surface) drill intersections and open at depth,” Astra CEO Brian Miller told Streetwise Reports.

Sometime this summer Astra plans to start its “Phase 2” drill program to expand the open intersections and explore for more veins.

The company is not shy about comparing Pampa Pacienca to the El Peñón gold-silver mine, operated by Yamana Gold, some 175 km north — it’s one of the first things you will read on Astra’s website.

Pampa Paciencia shows signs that it is an epithermal gold-silver discovery. It lies in the same geological belt in the same country and in host rocks that are the same age as El Peñón. The old mine remains in production, and it produced more than 400,000 oz Au annually at its peak.

Astra will have to conduct more exploration to confirm that Pampa Paciencia is indeed its “doppelganger.” And the junior explorer has the right team on board to lead the charge.

Astra Director Darcy Marud was a member of the Meridian Gold team that discovered El Peñón in the mid 1990s. He later became senior vice-president of exploration with Yamana Gold after the major bought Meridian in 2007. He remained with Yamana until 2017.

Astra Exploration Director Diego Guido also has some discoveries under his belt. He is credited with the discovery of the Pingüino deposit in Santa Cruz, Argentina, and worked at Newmont Corp.’s (NEM:NYSE) Cerro Negro during its discovery.

Long before Astra started drilling, the exploration team completed property-wide mapping and sampling, as well as localized trenching. The work helped define a mineralized vein boulder field over roughly three-quarters of the project area, and the boulders were used to help determine drill targets.

Most of the drilling focused on the 1.4 -kilometer-long Paciencia vein system in the North Zone, which is comprised of Paciencia Oeste, Paciencia, and Paciencia Este vein segments.

Pampa Paciencia sits on a 38-square-kilometer land package with road access. It’s less than 15 kilometers from the Sierra Gorda copper-molybdenum mine, controlled by Polish company KGHM Polska Miedź S.A. (55%), and 5 kilometers from the Faride mine, another low-sulphidation epithermal vein deposit. Faride is a small operation now owned by Sierra Gorda. 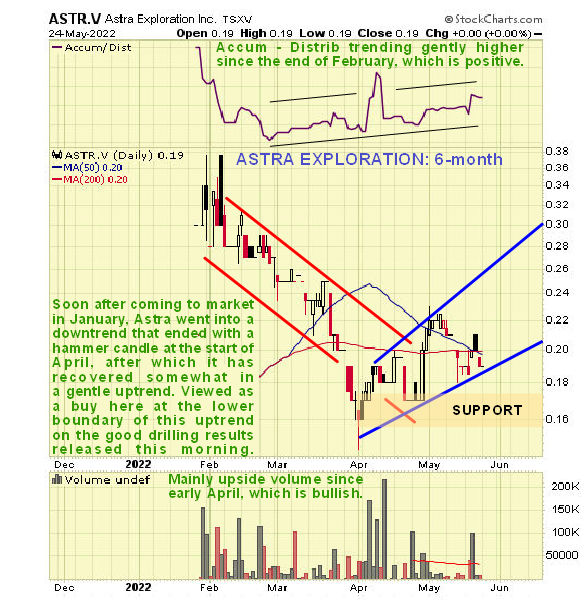 Astra listed at CA$0.30 per share in late January. Since then it’s been battered by a downward-trending broad market and closed at CA$0.19 on May 24. But technical analyst Clive Maund sees upside from here in a May 25 post.

Maund writes: “After hitting bottom, [Astra] reversed into a gentle uptrend, which is continuing, and the reaction of the past several weeks back across this uptrend channel to its lower boundary is viewed as presenting a buying opportunity, especially given the good drilling results that were published this morning.”

2) The following companies mentioned in this article are billboard sponsors of Streetwise Reports: Astra Exploration Inc. Click here for important disclosures about sponsor fees. The information provided above is for informational purposes only and is not a recommendation to buy or sell any security.