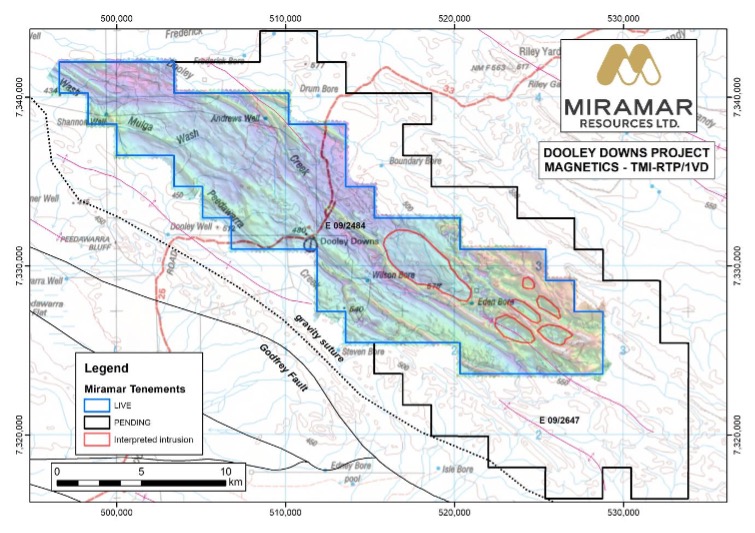 Led by Doray Minerals founder Allan Kelly, explorer Miramar Resources is best known for its taste for gold. But new survey data from its Bangemall project could show the way to an emerging rare earths province on the company’s ground.

Part of the larger Bangemall project, Dooley Downs is located in the Capricorn Orogen in WA’s Gascoyne region, where Hastings Technology Metals (ASX:HAS) hosts the world class Yangibana rare earths deposit and recent discoveries by Dreadnought Resources (ASX:DRE) and Lanthanein Resources (ASX:LNR) have signposted it as a critical minerals hotspot.

“We are seeing numerous large radiometric anomalies which appear to be spatially related to potentially unmapped intrusions, something unexpected for this area,” Miramar executive chairman Allan Kelly said.

“Given the REE discoveries being made by some of our neighbours nearby, the new results are highly significant for the overall prospectivity of our Bangemall Project tenements.”

Rare earths have become one of the most sought after commodities for explorers and governments alike thanks to their role in future facing fields like renewable energy and electric vehicles.

A suite of 17 rare metals whose supply chain is dominated by China, they are best known for the heavy rare earths used in permanent magnets, key components of EVs and wind turbines.

It is a market expected to expand significantly in the coming decade amid the transition to low carbon energy and transport, and the Australian Government has been tipping billions into funding new developments on our shores.

At Bangemall, Miramar identified a number of magnetic or radiometric features which look like igneous intrusions within the Edmund Basin sediments at Dooley Downs.

A number of ovoid magnetic features ranging from 600m by 600m to 6km by 2km were identified in the south east of the project around Eden Bore.

The largest could feature a large intrusion beneath a previously mapped anticline, with a number of smaller but stronger thorium and uranium anomalies seen southeast of Eden Bore on the margin of interpreted intrusions.

There are no obvious features on the surface in the topography to explain the anomalism, with ironstone float from the Eden Bore target to be sent for multi-element suite analysis.

Miramar is looking into whether the anomalies are caused by intrusions or even carbonatites, the rock type at a number of major rare earths discoveries like Lynas’ Mt Weld mine, the largest rare earths deposit outside China.

“If these anomalies in the Edmund Basin are caused by igneous intrusions, and potentially carbonatites, it would be extremely significant for the prospectivity of the wider Gascoyne region,” Kelly said.

Miramar has been drilling and exploring for gold at its Gidji and Glandore East projects near Kalgoorlie, and also owns the Whaleshark IOCG project in WA’s north, having previously outlined the diamond and uranium potential of the Bangemall project.